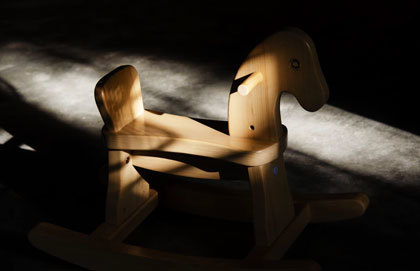 “Listen! Your brother’s blood cries out to me from the ground.”

The first time I heard the Cain and Abel story this verse stood out to me as though highlighted in red. I sat there, a child in Sunday school, trying to grasp what God was saying to Cain, the Bible’s first murderer. What does screaming blood sound like, I wondered.

Now I teach Sunday school, although I’ve never taught Cain and Abel. I started thinking about the story again recently while researching some family history.

It began with a wooden rocking horse covered in bristly pony hair, with glass eyes that seemed watery and reflective. I’ve never seen it, but my husband’s 94-year-old grandma, Zita, described it to me. We were working on her memoir.

Zita was 17 when the Soviet Union invaded her country, Lithuania, in 1940. She narrowly escaped deportation to a forced labor camp by the Soviet secret police. A year after the Red Army arrived, the Nazis invaded. Zita, her husband, and two small boys fled to Germany in 1944 before coming to Canada as refugees a few years later.

I would sit on the faded floral sofa in her small ground floor apartment in south Vancouver asking Zita to recall the color of a dress, the way a room smelled. We were rooting around in her memory for the details that would make her story come alive.

When she told me about the rocking horse, I felt a flutter in my chest, a small bothering of the heart.

The rocking horse had been a gift, Zita said. She and her husband, Adam, were living in Tverai, a small town in western Lithuania. Adam brought it home from work for their three-year-old son in 1944. Adam, a former police officer, was working as an accountant at the time; he told Zita the rocking horse was a present from his boss.

The gift seemed extravagant to me, especially in wartime when store shelves were bare. Where had Adam’s boss found such a treasure?

I underlined “rocking horse” in my notes.

The fluttery feeling came back one rainy morning when we were going over the timeline, picking our way through the tangle of Zita’s memories. Where did Adam go in June 1941, I asked. “He went to Rietavas,” she said. “He told me he hid in the bushes with the Partisans.”

I had read about what happened in Rietavas in the summer of 1941. At that time anti-Semitism was widespread in Lithuania. Many non-Jews blamed the country’s Jewish population for their suffering under the Soviet regime and greeted the Germans as liberators.

Versions of this story repeated in towns across Lithuania, Latvia and Estonia. In some cases, the locals were so eager to do the shooting, the Germans merely stood back and watched.

I asked Zita if she thought Adam could have taken part in the killings. “No,” she said. “He could never have killed anyone.”

She paused. “But there is one thing.”

Before Adam left her in June of 1941, he didn’t drink. After he returned he became an alcoholic, disappearing for days on benders. He would struggle with this addiction until his death by heart attack in 1987.

The flutter came back that evening when I was typing up my notes. And then it started to come when I was doing other things: loading the dishwasher, driving to the grocery store.

At first it was just distracting, but before long it took on an urgent quality. It demanded action, like a baby’s cry.

I emailed Nazi hunter Dr. Efraim Zuroff, the director of the Simon Wiesanthal Centre in Jerusalem, to explain the situation and ask for advice. How could I find out whether my hunch about Adam was right?

To my surprise Dr. Zuroff responded, telling me to contact the Special Archives in Vilnius, Lithuania. The archives, he said, housed the records of the trials of Lithuanian Nazi collaborators who were prosecuted by the Soviet government after the war. Even if he was never put on trial, Adam may have a file there if he was mentioned in the testimonies of others involved in the killings.

I took Dr. Zuroff’s advice. After exchanging a few emails with the archivist in Vilnius, she asked for my address and, inexplicably, a scan of my passport. Finally, she told me to wire 16 euro, which seemed promising.

When the slim envelope stamped “Lietuvos Ypatingasis Archyvas” was finally in my shaking hands, I realized that I would never again be able to go back to this moment when I didn’t know the answer to my question.

I sat down at my kitchen table.

In crisp, institutional English, the document summarized statements from seven witnesses of the events in Rietavas in June and July 1941. According to these statements, when the Nazis came to Rietavas they made Adam leader of a white partisan platoon. Led by Adam, this platoon arrested 200 Jewish people. After taking their possessions, Adam and the rest of the white partisans took the 200 Jews to Telsiăi. Some of the Jewish people’s possessions were taken to a warehouse; “valuable things were taken by Kaulius.”

I put my head down on the table. Two hundred lives.

I would tell Zita. We would add the information to her memoir. The flutter would stop.

But it came back to me two weeks later, early in the morning, when the light was seeping in through the blinds and I’d already been wrestling with my pillows for hours.

All at once I saw it, exactly as Zita had described it to me. Pony hair and glass eyes: the rocking horse.

In that moment I understood why the gift never made sense to me. It hadn’t been a gift at all. Adam had stolen it.

I had thought the flutter in my chest was about the 200 Jews of Rietavas. I was wrong. It was about one of those 200 people, the owner of the rocking horse. A single child.

Boy or girl, I wondered after that. Ringlets? Bangs? Dimples? A birthmark? A cowlick?

As a child, I had asked what the blood of a murdered person sounds like to God. The rocking horse makes me think there is no single answer to that question because the sound is different every time, as unique as the person who was killed. It makes me think the cries reach Him individually, not as a din or a chorus, even if 200 are killed – or six million.

“Listen,” God said to Cain, which suggests Cain, too, could hear his brother’s blood crying from the ground.

That’s what I think about now.

Did I hear a similar cry, 77 years after the fact? Or was the flutter just a hunch, a gut instinct felt in the chest?

Was I wrong about the rocking horse? Was it simply an extravagant gift, unrelated to what happened in Rietavas and Telsiăi?

What I do know:  Once I made the connection between the rocking horse and the Jews of Rietavas, the flutter left me.