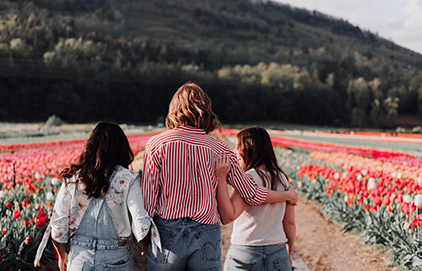 “You're off to Great Places! Today is your day! Your mountain is waiting, so... get on your way!” (Dr. Seuss, The Places You’ll Go)

With each closing night of a play or musical, our director read The Places You’ll Go as a goodbye to the senior-year students of the cast. I watched each year as they wept, mourned their high school years and decidedly broke their own hearts lamenting over the big, scary, adult world they were to face beyond the high school stage upon graduation in a few short months.

When my own time came, assuredly as the rest and altogether anticipated by my own pent-up emotions, I found myself with extreme peace, solace at the thought of leaving it all behind. I can’t explain for the life of me why it was that I found myself so assured that I was going to be OK.

Don’t get me wrong, though – I’ve always been terrible at goodbyes.

Seeing as springtime is often a time of change, memories have been popping up on my news feeds as of late, the most recent being my high school graduation occurring on this day, apparently, some odd years ago. And my college graduation of one year ago was sometime around now, too. With each photo, post, comment, I’m reminded of those days and the people I have left behind through the years.

I’m also reminded how bad I am at saying goodbyes despite the profuse number of them I’ve said in my short life to date.

While my leaving ceremonies of high school and college brought a significant amount of bittersweet “will probably see you later,” waves of these same uncertain goodbyes have seemed to follow me around for the years apart from a ceremony – dear friends from long-term mission work, volunteer trips abroad, travels across the ocean, and more. I’ve been led to believe that the sheer amount of goodbyes I’ve said over time is excessive compared to the average graduate, with all the moving around I did in my first few years out the high school gate to rural Quebec, the Ottawa Valley, Ireland and beyond.

Maybe the good God handed me as many people to bid adieu as He did, just so I could learn a lesson on how to let go. In that regard, there’s progress still to be made.

As a means of coping with goodbye, I often held onto hope that I’d once again see that friend, classmate, teammate in years to come, so “it’s not goodbye, just ‘see you later.’” Alas, there are faces I’ve yet to see years after the fact, except for their Instagram and Facebook feeds: a new baby, a shiny engagement ring, another graduation – these, among other life moments I’ve missed in the lives of people I swore I would keep in touch with, but never mustered the energy to write to or call.

I had the pleasure of reuniting this week with one of those goodbyes. A friend from halfway across the globe who was a sister to me from the day we met. Goodbyes are hard, but those moments of reconnecting are precious, valuable and rare. In some ways, it was as though time had slowed to a halt: “Really, has it actually been two years since I saw you?” In other ways, a lifetime of milestones has passed by. Two years isn’t a long time, but it was enough time for me to graduate college, start a new job, get engaged, move, quit my job, start university, get married, start another new job. Goodbye was significant enough for us to miss out on many a life event.

Parting is such sweet sorrow, but I also know that I’d be selfish to never say goodbye. It would be unrealistic at best for me to believe that all the people I meet will forever be in my life. Saying goodbye meant that, in this circumstance and others, I’m allowing these to be free, live the life they’re seeking and taking journeys I’m perhaps not meant to venture on with them. Although goodbyes can be icky and sad, they are necessary.

Parting ways means that I can give more of myself to whatever or whoever is to come into my life. With every goodbye, I feel a piece of my heart goes with the person and leaves me a little emptier. It may hurt, but I don’t see that as a bad thing. Saying goodbye is a natural part of life. A breakup, the death of a loved one, a change in career, will amount to goodbye.

The constancy, though, with these goodbyes, is the reassurance of new hellos. Saying goodbye allows me to move on, to let go, to create spaces in my heart for something new and exciting. And with these hellos, I am reminded of the opportunities God creates for me in the milieu of having grieved what’s gone.

With each “goodbye,” I’m reminded there once was a preceding “hello.”

My high school graduation, commemorated some years ago on this day, was one of the least significant goodbyes I’ve had. As the space between me and that event emerges into a chasm over the years, so too does its insignificance grow. What has also grown, over time, is the knowledge of having God with me, in the journeys of saying goodbye and hello alike. When I have allowed myself to move on and let go, then I can rejoice in the reunions, however seldom they may seem.