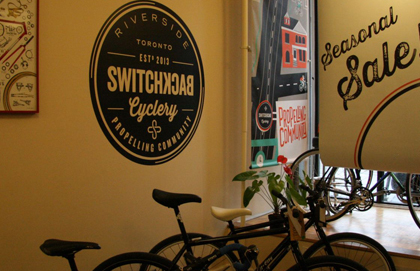 From the exterior, passersby might not see why Switchback Cyclery on Queen East in Toronto is one of the City’s most impactful bike shops. Behind its welcoming, aesthetically pleasing store design and impressive roster of high-end cycling products lies a deeper call to love the poorest and most marginalized people in Toronto.

Switchback is an arm of Sanctuary, a church in the downtown core that strives to create community and provide a place of safety, security and respect for some of the city’s needy. Alongside their weekly church services, Sanctuary regularly provides warm meals to hundreds of street-involved people through their weekly drop-In program, where they aim to foster meaningful relationships above all else.

Switchback’s motto is “propelling community,” which is not only an apt description of how they mobilize the city’s commuters, but also how they mobilize social change by bringing street-involved Torontonians  into the fold of their operations through meaningful employment.

Alan Beattie, Executive Director of Sanctuary, says that Switchback responds to one of our primary God-given human desires, which is to do meaningful work— an opportunity that many street-involved people are never afforded.

Working at Switchback is “for those of our friends who want a deeper level of support, and who are ready for this in their lives,” says Beattie.

The Sanctuary felt that it was right to offer meaningful employment for those in their community who don’t just need the services offered at their weekly drop-in such as a pair of socks or a warm meal, says Beattie. It provides the next level of care and a sense of vocational purpose that might not otherwise be given to people who come from the margins of society.

Beattie himself knows the value of pursuing your passion at work. A former bookseller, Beattie says he found his calling in a chapter of a book 15 years ago. Beattie never had a particular passion for social justice until, based on the recommendation of a friend, he picked up “Streams of Living Water” by Richard J. Foster.

“When I got to the part of the book on social justice, something resonated with me… it reverberated in my heart,” Beattie says.

The feeling eventually led him to quit his stable job and jump into his life’s work at Sanctuary, where he can now be part of God’s work in shaping other people’s callings.

Sanctuary’s ambitious mission to bring people at the fringe of the city into the core is work that can be messier than his old career selling books. But when asked what propels him and his colleagues to strive towards this goal, Beattie says it is simply their commitment to show the love of Jesus Christ to the most disenfranchised and ostracised people in the city, making Switchback one special place to get your bike fixed to be sure.