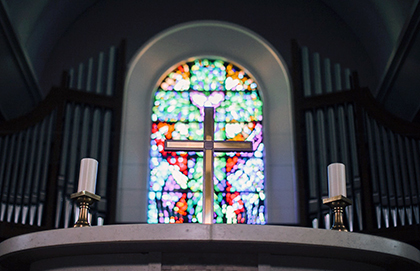 This article is part of an ongoing series on faith leaders who have demonstrated courage living faith in the public square. In partnership with the Cardus Religious Freedom Institute, Convivium magazine will regularly publish these profiles from contributors across Canada. To submit a story to the series, email Aaron Neil at aneil@cardus.ca and Rebecca Darwent at rdarwent@cardus.ca.

I arrived in the sacristy of my parish on the morning of Sunday, June 5, 2011 expecting it to be like any other Sunday. Serving the 11 a.m. Mass, I usually arrived 30 minutes early to vest and assist with any last-minute preparations. When I walked into the sacristy, however, I was greeted by a new and unfamiliar face.

“Good morning,” the gentleman said. “My name is Cristino. Nice to meet you.”

“Mark,” I replied. “You must be the seminarian Father Sztuk was speaking about.”

Seminarians typically receive summer placements in parishes to gain pastoral experience. That summer, a young Cristino Bouvette received his summer placement at Saint Joseph Parish, an active, thriving suburban parish in northwest Calgary. He was, all at once, everything and nothing I expected a seminarian to be.

He was so young, but seemed like a perfectly normal guy. He had perfectly spiked hair and could have easily passed as a member of any number of popular pop punk bands at the time. However, this was coupled with a pair of well-worn, metal-rimmed glasses – the kind that no 24-year-old would dare to be seen wearing these days.

Everyone in the parish became quickly captivated with Cristino. On my part, I had never seen a young man so enthralled by the Mass, approaching it as if his life depended on it. As Catholics, we believe that Christ is truly present in the Eucharist, which is the source and summit of our faith, yet often we are guilty of failing to give Him due reverence. Yet here was a young man who approached the Mass and the Eucharist as if his life depended on it – because it did. It was evident that Cristino was deeply in love with Christ and His Church, a love that was captivating, edifying and ever-growing.

Despite living three provinces apart for most of our friendship, now Father Bouvette’s impact on my faith is ever-present and tremendous. For seven years, he was part of an apostolate that afforded the faithful access to his homilies and talks. I always made time to listen to every homily and talk, often sharing many of them with my friends. Some of these homilies and talks have been the centrepiece of memorable mealtime conversations and I am deeply grateful for Father Bouvette’s gifts as a first-rate preacher and teacher of the faith.

I was always pleased to hear about Father Bouvette from my friends in Calgary. They, too, became quickly captivated by his love for Christ and how he brought them to encounter that love themselves. When he visited Kingston, where I was completing my undergraduate studies, he quickly captivated my friends there, too, drawing a fair size crowd for one Saturday morning Mass – in the summer, no less. Once my friends got over the fact that he was not Filipino (and I, not Italian) and our supposedly similar mannerisms, they, too, were edified by his example.

Venerable Fulton Sheen gives perhaps the best reason why Father Bouvette quickly captivates the souls he encounters: the priest is not his own. The faithful, especially the young, are drawn by Father Bouvette because of his love for Christ and His Church, and his desire to bring others to encounter that love is not for his own benefit, but that of others. Indeed, Saint Thomas Aquinas defined love as willing the good of the other as other, and chapter 15 of John’s Gospel reminds us that, “No one has greater love than this, to lay down one’s life for one’s friends.” Father Bouvette is a remarkable example of a man conformed to Christ, laying down his life that others might also be conformed to Him.

Why, then, is Father Cristino Bouvette my faith hero? As a priest, Father Bouvette is a public witness of the faith not only by virtue of his ordination, but in his burning desire to lead souls to Christ through serving His Church. I am certain there are days when he endures a white martyrdom because of his priesthood and that in itself is heroic. Far more frequently, however, his heroism manifests itself in daily life. It manifests itself in the way he celebrates the sacraments, especially the Eucharist. It manifests itself in the way he challenges youth to live the fullness of Catholic life. It manifests itself in the way he, as a friend, mentor, and spiritual father, sacrifices of himself for the salvation of souls. We often associate heroism with something done on a grand scale, but I would dare to say that an even greater heroism exists in those, who like Father Bouvette, courageously and virtuously live their lives of faith in the public square. A life of faith in the public square, often has unpleasant consequences in our day, but it also affords the consolation, friendship and joy to spur us on.

We ought much to learn from Father Bouvette’s example. When we think of our heroes, there is a temptation to think whatever level of achievement they attain is simply motivation for us along the way. We ought to be inspired, however, by their examples and strive to be like them. Like Father Bouvette, may we grow in our love for Christ and His Church, and may we strive to boldly and courageously invite others to an encounter with Him. May we, too, strive to be witnesses of faith in the public square, whatever the cost, knowing that as people of faith, we have much to contribute to the common good.