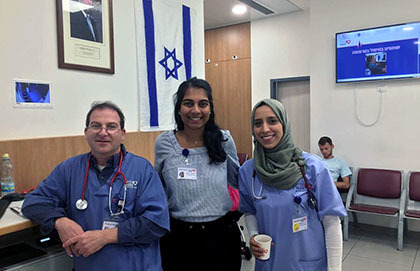 Healthcare Has No Borders September 25, 2019  |  By Petula Fernandes

This past summer, I had the incredible opportunity to work with a Jewish-Israeli doctor and a Muslim-Palestinian doctor in Jerusalem, through an Israel education organization called StandWithUs.

Two American teenage boys, an elderly Russian-Jewish woman, a young Muslim couple, and an Orthodox Jewish (Haredi) man tending to his wailing toddler. I would eagerly observe this common scene each morning when I walked into Terem Emergency Medical Clinic over the course of my six-week internship there. A quick glance at Terem’s waiting room and one could easily see the cultural and religious diversity of Israel reflected by the patients gathered.

Terem is a 24/7 emergency clinic that provides primary healthcare to Israeli and non-Israeli citizens alike while having more than half of its staff employed from the various Palestinian towns surrounding Jerusalem.

In a region where the media does a poor, and oftentimes biased, job of reporting the very nuanced political situation of the Arab-Israeli conflict, I was pleasantly surprised to discover a world of coexistence at Terem, a space where mutual respect and dialogue were flourishing among the medical professionals and their patients.

But unfortunately, this is not a news story that would ever make headlines.

One day I asked my reporting supervisor, Dr. Moshe, an Orthodox Jewish physician from Delaware, what his most rewarding experience has been since working at Terem for over a decade. He recounted that earlier this year, he was treating a Palestinian patient with late-stage kidney disease. The patient was in dire need of a kidney transplant and none was available. Dr. Moshe happily shared that he volunteered to donate his own kidney, underwent immediate surgery and the transplant was successful. To such a noble act I commended him for, he responded, “Whoever saves one life, has saved all humanity,” a percept from the Mishnah, a collection of texts pertaining to the oral tradition of Jewish law.

I was in awe at the sheer selflessness of Dr. Moshe’s character, inspired by his faith and strong commitment to upholding Jewish values.

If only we could all strive to act so selflessly for the good of our neighbour. What impact would that have on the world? Surely, the Arab-Israeli conflict would cease to exist.

A second experience worth commenting on is the relationship I observed between the Israeli and Palestinian medical staff. Anyone who has travelled to Jerusalem would know that the city shuts down for 25 hours every sundown on Friday to sundown on Saturday in observance of the Sabbath or Shabbat, the Jewish day of rest. This means no public transportation runs, all commerce ceases, families gather and the spirit of Shabbat takes hold of the city.

Considering Jerusalem is the only city in the world that strictly observes the Shabbat, I figured Terem would have limited hours of operation during this time. To inquire more about this, I asked my team member, Shatha, a residency fellow from Beit Hanina, a Palestinian town on the outskirts of Jerusalem. She informed me that during Shabbat and all the Jewish high holidays, she and non-Jews alike run Terem, ensuring that their Jewish coworkers are able to have the time off.

Another beautiful example of selflessness.

My heart delights in seeing people taking great measures for the good of the other. Such a feat involves removing one’s own comforts and looking beyond differences to recognize a shared humanity and the merits it brings forth.

The message I would like to share about my experience at Terem is that there is hope for peace and reconciliation, even in the most difficult of situations. In this case, healthcare acts as a mediator in the conflict, bringing Israelis and Palestinians together in a shared mission of serving a patient’s needs.

I believe clinics such as Terem, and in fact all healthcare facilities, function as an important reminder to humanity about the universal right to medical care, regardless of the patient’s cultural, religious or political affiliation and how every individual is entitled to receive basic health treatment.

This Israeli hospital reminds healthcare providers to uphold the essential mission of preserving the sanctity of all life, in keeping with maintaining the integrity of the Hippocratic Oath.

I had the privilege of seeing the best of humanity at work during my internship experience, allowing people of different faiths and political views to rise above their differences and come together to serve a higher moral purpose for the greater common good.

I take great pride in the fact that I am building my career in a profession that does not discriminate based on ethnicity, creed or political views. May healthcare be the pioneering example whereby individuals can recognize the humanity in each other, and ultimately strive to cultivate a society promoting peace for all peoples.