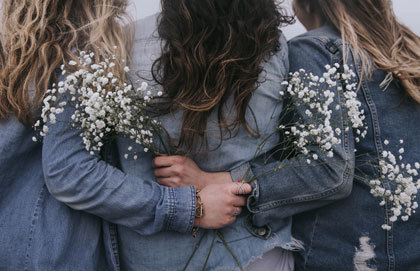 Cathie Ostapchuk, cofounder of Gather, a non-profit network of Canadian Christian women, wondered where all the Christian women were in Canada. A long-time devotee of authors such as Beth Moore, Anne Graham Lotz and Jennie Allen, Ostapchuk is well acquainted with the American Christian leadership community. She regularly found herself on flights to the U.S. to gather with other women who share her Christian faith.

But on the journey home from one American conference on faith, Ostapchuk began to question how she could mobilize Christian women in her own backyard.

Rather than import a faith community into Canada, Ostapchuk was interested in connecting thought-leaders and community members that weren’t getting the publicity their American counterparts were.

That’s when Ostapchuk, along with Ellen Graf-Martin and Helen Burns, started Gather, a not-for-profit organization that seeks to unite and inspire Canadian Christian women to build a connected and vibrant community of their own north of the border. In operation since 2014, they now host public talks, regional community groups called “Gather Circles,” conferences, and more.

With a background in leadership training and personal coaching, Ostapchuk’s life purpose has been to elevate and inspire other people to use their God-given gifts to their fullest potential. Many of her former clients are in the upper echelons of the business and charitable sectors, running organizations and starting movements in their own communities.

As a mobilizer of leaders, Ostapchuk’s natural inclination was to look around to inspire another woman to start a Canadian movement. But this time, Ostapchuk felt it was her opportunity to start an organization.

Ostapchuk’s mission is to tell the “uniquely Canadian story of Christian women.” In doing so, Gather places a strong emphasis on balancing diversity and unity among the Christian community. As they plan for future events, and the expansion of the organization, making all women feel welcome is at the core of their aims.

Ostapchuk says that Gather invites Canadian Christian women to ‘take their seat at the table,’ so to speak. By connecting these women, Gather hopes to elevate brilliant Canadian minds to the global stage to encourage and strengthen “the uniquely Canadian expression of [God’s] heart of us,” says Ostapchuck.

If you would like to learn more about Gather, and get connected with other Christian women across the nation, visit their website and learn how you can get involved in a Gather Circle in your community.