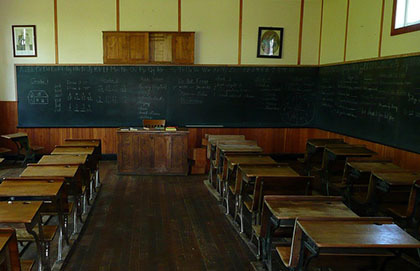 Alhamdu-Lillah, the Islamic Academy of Saskatchewan, stands tall in the small town of Prelate, Sask.

But the building’s origins go back to the spring of 1919, when three “prophetic women of hope,” arrived in Prelate from Cologne to teach in the pocket of devout German-speaking Russian emigrants who had settled beneath the vast expanse of sky and plain at the edge of what are known as the Great Sand Hills.

They were Ursuline nuns, the founders of St. Angela’s Academy of Prelate. For the next eight decades, until their school closed, five generations of students in southwestern Saskatchewan were taught by hundreds of dedicated Ursulines. About 30 members of the teaching order remain. The youngest is in her 50s. The oldest is 100.

Saskatoon’s Bishop Mark Hagemoen will celebrate Mass at the Cathedral of the Holy Family June 1 to commemorate the centennial of the arrival of the Ursulines in Prelate.

The Ursulines, whose mission is “to educate for life,” were founded in Italy in 1535 by St. Angela Merici. Ursulines from France arrived in Canada in 1639, and over the centuries many more communities opened across the continent in cities and towns from coast to coast.

The nuns in Prelate were originally from a German convent which had been invited by the Catholic Settlement Society to open a school in Western Canada. They arrived in Winnipeg in 1912, but because of anti-German sentiment during the First World War and infighting within the community, they were unable to gain the support of Bishop Arthur Sinnott to complete their efforts.

Further attempts by the Ursulines to open schools in Grayson and Windthorst, Sask., during the First World War were similarly rebuffed. As the hostilities dragged on, their Mother House recalled them to Europe because it no longer “had the personnel nor the means” to sustain such an undertaking in Canada.

Undeterred, a headstrong Oblate priest, Joseph Redinger, who had worked unsuccessfully with the Ursulines to establish a convent in Grayson,  persuaded the their German superiors to allow three nuns, Mother Clementia Graffelderm, Mother Luitgardis Kratochwill and Sister Thekla Bonus, to follow him to Prelate when he was appointed the town’s first resident pastor in 1915.

The windswept streets of the isolated hamlet, 125 km from the nearest railroad at Maple Creek and 70 km from the Alberta border, had been laid out by the sodbusters and named to reflect the Church hierarchy:  Cardinal, Bishop, Abbott and Deacon.

Once installed, Redinger raised enough money to build a school at the north end of town with living quarters and a chapel for the sisters. In December 1919, the three Ursulines moved into the ground floor unprepared for isolation and the challenges ahead of them. Not only were they welcomed in the district, but within a decade they had recruited six postulants and were teaching five grades in one-room country schools at nearby Tramping Lake, Rosenthal and Blumenfeld.

“Life is hard and rough here, but it is also rewarding,” one of the sisters wrote to a niece in Germany.

Another sister who had 45 students in her class arrived at a country school to find “the children were far below standard. The only textbooks ... reader, speller and arithmetic. There were no textbooks for history, geography or science – for history there was an old Britannica reader in a sparse library.”

By 1922, the religious community had grown to 16 and St. Angela’s convent became a dependency of the Mother House in Cologne.  Sister Teresa Baker opened a music school and Sister Pascal Curley a drama school.

“It evolved over the years. We must have taught hundreds and hundreds of girls who came from around the world. We stressed the arts and music,” said sister Magdalen Stengler, the Ursuline’s archivist who has written a history of the Academy.

During the Depression, the Ursulines donated their services to teach at 86 rural schools in what was then the Diocese of Gravelbourg. These cultivated women raised cows and chickens, planted gardens, and held annual fundraising bazaars; they travelled by horse and buggy to teach. The horses were not always dependable. Some dropped dead, buggy shafts broke and harnesses tore. Each morning as the nuns set out on their rounds they recited a prayer: “Lord, keep us out of the ditch.”

By 1946, the convent in Prelate was transformed into an accredited residential high school for girls.

“Some of the girls were there by choice, some were not, but the sisters touched our lives in ways they are not aware,” said Edwina Weninger, class of 1979. “We are the legacy of women who gave their lives to God and their proud record. They did their best to teach us.”

But time has finally caught up with North America’s oldest order. Like their counterparts in Quebec City, the Ursulines of Prelate moved out of their convent, and all but two live in Saskatoon. Too few and too old to maintain the Academy, unable to attract qualified lay teachers to Prelate, they sold the Academy to a Saskatchewan boarding school for bright young students of Islam.