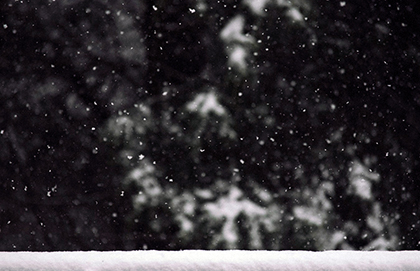 This is the first article of a weekly series of Advent reflections. To read the second piece, please click here: The Point of Darkness Around the Light.

Shiny, silver tinsel hung from white artificial trees and sparkly, obnoxiously large presents were scattered around Santa’s Kingdom as I snapped photographs of kids who reluctantly sat upon a pristinely white couch with jolly old Saint Nick. Family after picture-perfect family walked through the display, and I wished each one a Merry Christmas and Happy Holidays, while simultaneously being drowned out by the carols of goodness-knows-how-many different renditions of “Last Christmas” blaring through the mall corridors.

It was this time last year, and the year before that, that I was taking photos of hundreds upon hundreds of children with a mall Santa Claus before we had even had the chance to turn our calendars over to December. Not yet ready for Christmas, likely no gifts yet bought, I felt scandalized by my own utterances of holiday greetings more than a month before Christmas actually began.

Some few years before working as one of Santa’s elves, I found myself amid the most unique Advent experience. I spent a few months living and working in the tiny town of Combermere, Ont., among priests, non-ordained men, and women in the community of Madonna House. The way of life there is something so fundamentally different from the way the world works (that in and of itself is a story for another day), and their observance of Advent was no exception. When Advent rolled around, there was not a Christmas light lit, nor a giant inflatable snowman to be seen. If you didn’t know it was December, you wouldn’t have known.

Decorations began appearing, slowly and intentionally, as the weeks progressed. Life-size cut out images of the Holy Family traveling on a donkey moved closer to the chapel, where they would eventually stay for the duration of Christmas season beginning on December 25. As a guest to the community life, I relished each decoration that was put up, pointing out to others excitedly the lights that were lit up in the third week, garlands and ornaments that appeared sometime before that. Each one was new, compelling, and deliberate. The director-general for women wore bells around her wrists, as a reminder of the Holy Family’s anticipated arrival on a donkey into Bethlehem.

The traditions were quiet, understated, not shouting for attention. There was a simplicity and holiness that was nearly tangible in the air, and the preparation for Christmas and Christ’s coming to us was as real as the anticipation of a newborn baby in the last weeks of being in its mother’s womb.

I left the community 10 days before Christmas, so I didn’t have the opportunity to relish the entirety of the season. But I know, without any doubt in my mind, that the celebration of Christ’s nativity was greater, more celebrated and revered than any other event that month (believe me, we baked dozens upon dozens of cookies and froze them for the community to eat during the 12 days of Christmas).

I walk through bustling grocery stores and see Christmas treats and hear the blaring Christmas carols a month before Christmas even begins, and I can’t help but feel an acute awareness for the quiet, simple ways I’m certain Madonna House is currently preparing for the Advent season. Catherine de Hueck Doherty, the late foundress of Madonna House once wrote:

“Advent is a short season, yet it covers a long distance. It is the road of a soul from Nazareth to Bethlehem. It seems such a short distance, as we are accustomed to thinking of distances… We must start with a ‘fiat’ that re-echoes Mary’s fiat (“Let it be done, O Lord”). It is a fiat that each of us should say in the quiet of our hearts… Let us arise from that sleep with its dark nightmares, and begin our journey to Bethlehem. But let us understand that this ‘Bethlehem’ we seek is within our own souls, our own hearts, our own minds. Advent is a time of standing still and yet making a pilgrimage. It is an inner pilgrimage, a pilgrimage in which we don’t use our feet.”

When I look around, see the Christmas paraphernalia, hear the holiday commercials, I feel discouraged with the consumerist mindset our world is obsessed with. Evermore, I find the world losing its sense of “now”, forgetting that now, too, there is a season worth living, and not wishing away. Advent is not the time for skipping ahead to Christmas. When preparing for a trip, it makes sense to pack, lock up the house and ensure your mail is picked up and plants are watered. You wouldn’t leave the house without ensuring its security or hop on a plane without luggage. So too, then, is there space for preparation during the Advent season.

And the preparation isn’t just for Christmas. Sure, the cookies need baking and the turkey roasting, gifts need to be bought and plans need to be made. But the more important preparation is in the heart as we prepare for Christ’s coming to us both at Christmas and at the end.

Uncomfortable as it may feel, Advent is a time for remembering where we are and where we are going. We want to skip over the pain and gutting, and get right to the Instagram-worthy moments of aestheticism and ugly Christmas sweaters. But there’s a reason for this season, and that reason is more important than chocolate calendars and twinkle lights (and gosh do I love my twinkle lights).

I’m not photographing Santa this year, nor am I in a small hidden town fully entering into Advent. But, there’s a middle ground, I think, found in-between the two that I’ll strive for once Advent rolls around. An Advent of the heart, where the Christmas lights can wait and the tree will stay packed away well into December. This preservation of Advent won’t prevent me from frequently watching (and “religiously” quoting) Elf or baking oodles of cookies for the next month. But I won’t be found wishing away “Merry Christmas” to anyone before the night of the 24th, nor will I jump ahead of the calendar to avoid “now.”

Wishing away today might be the cultural norm, but the Advent wreath that next week will sit on my table, will be lit one candle at a time, one week at a time, providing small amounts of light gradually getting bigger as we near the feast of the Nativity. Hard as it might be, the preservation of Advent is one of the home and of the heart, and necessary in a time of November shopping sprees and premature decorating. While the songs blare and lights shout, there can be a deeper internal grounding.

Throwing out this time for preparation won’t bring Christmas to us any faster, but it’ll certainly remove our focus from the importance of the season. When something is long anticipated, so much more do we appreciate its arrival. This time doesn’t have to be wished away, despite the blaring demands of Christmas in November around us. As Christians, there is a time to weep, and a time to laugh, a time to mourn, and a time to dance.

Advent is a time to prepare for Christ’s coming to us — first at Christmas, and then the end.