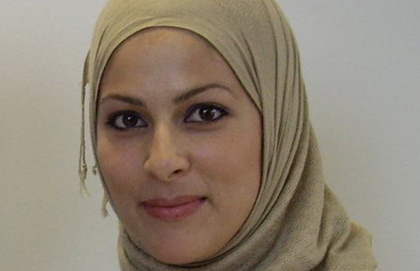 "A woman of valor, who can find?" asks the book of Proverbs. "Far beyond rubies is her value."

I had found my woman of valor in an everlasting friendship with Tanya Khan. With our friend Rev. Cathy Gibbs, "We" were the three musketeers of interfaith activism: Tanya, a devout Muslim, Rev. Cathy Gibbs, an Anglican priest, and me, a Jew. We, so different, yet exactly the same, women who were bent on making the world a better place through common understanding, stoked by a great love and respect for one another.

I first met Tanya about 20 years ago when I worked for an organization that taught interfaith understanding to school kids. The essence of the program was to take students to places of worship so that they may feel, taste and smell the mysterious world of others and see that the similarities of their lives overrode the differences.

A visit to Tanya’s mosque, the Ahmadiyya Baitul Islam Mosque, was a delightful experience each time, and through hundreds of trips, we found that a true bond had developed between us, over and above mere work.

We began hanging out. Chinese food – hold the pork.

Our relationship was cemented forever when we arranged a women’s interfaith build for Habitat for Humanity in 2008, 30 women, 8 faiths ages 16 to 84. That initiative was the impetus for our interfaith woman’s group which still meets today.

We shared Passover Seders in my home, and reveled in Eid at hers. The conclusion: Eid food’s taste way outweighed matzah. She and I organized the first visit of Muslims, including Imams, to the Toronto Holocaust Centre, where most of the audience wept at hearing a survivor’s story. She deeply understood the importance of this for me, I, a child of survivors

We watched foreign films some incendiary of Jews, Muslims or Christians and that only gave us more manna for conversation, never losing sight of our mutual respect for one another.

We shared Easter dinners at Cathy’s home and Thanksgiving turkeys; we made Hungarian stuffed peppers and Lebanese hummus. We travelled to Albion, Pennsylvania to speak to students and parents who knew Islam only through the corrosive news articles they had been reading since 9/11.

Tanya broke every stereotype I may have had about Muslim women. She was hysterically funny, smart, compassionate and strong, a kindred spirit.

As a teacher at Louis Honore Frechette Public School in Thornhill, Ont. she was deeply loved by her students and staff, and always infused her students with a sense of equity and an open heart. Tanya would have been a vice-principal this year, something she had been working towards for years. I’ll never forget her story of one student who told her that if she were a menu item at McDonalds, she would be a "McGorgeous."

Her mantra to her students was always: if you don’t stand up for something, you will die for nothing.

We tend to identify strength with physical power, but true strength comes from within. It is the power to perform the menial with dignity, the everyday task with enthusiasm, the raising of children with heroic discipline and unstinting devotion, the infusion of the home with holiness, and the creation of that indefinable warmth and joy that make a beautiful family. She was the true meaning of a wife, mother, friend, confidant, teacher and a student of life.

Our hearts are inconsolable that she has physically left us but we truly believe that people only die once they are forgotten. Through her multitude of friends, family, husband Asif and three beautiful young daughters Alia, 12, Safiya, 10 and Nadya, 6, she will live forever.

She just needed to "move on" to her next project.

What though the radiance
which was once so bright
Be now for ever taken from my sight,
Though nothing can bring back the hour
Of splendour in the grass,
of glory in the flower,
We will grieve not, rather find
Strength in what remains behind.

Judy Csillag is the BFF of Tanya. Originally printed in the Toronto Star and the Globe and Mail.