In the sixth of his regular dispatches from from Montreal’s faith-rich Outremont district, Gideon Strauss talks to one restaurant owner of Jewish background who was drawn to Sufi Islam.

“Perfection is to sit among people, sell and buy, marry and have children; and yet never leave the presence of Allah even for one moment.”

“Anyone killing anyone is always sad. If you kill one person, it’s like you’re killing all of humanity.”

I am having a conversation with Jonathan Hassan Friedmann in the week after the Quebec City mosque shooting in which six worshippers were killed, five critically wounded, and many others injured.

The walls of Rumi Restaurant on Hutchison Avenue in Outremont are decorated with carpets from as far away as Uzbekistan – carpets collected by Jonathan and his brothers on their travels, or received as gifts from traveling friends. The décor and ambience of the room resonates with the cuisine served, an eclectic and unpretentious combination of North African, Mediterranean, and Middle Eastern. We are talking at a table in the front corner of the restaurant, brightly lit from two sides by large windows.

Jonathan and his brother, Todd Husseyn Friedmann, started Rumi Restaurant in the autumn of 2001, in part as an expression of their own deepening commitment to Sufi Muslim practice. From a Jewish background, they had been spiritual searchers since at least their high school years. In the spring of 1999, Jonathan discovered in Sufi practices the first spiritual experience that truly resonated with him.

“I was on an inner search. I didn’t like traditional religious practices, but the taste, the experience [of Sufi practices] made sense from within. 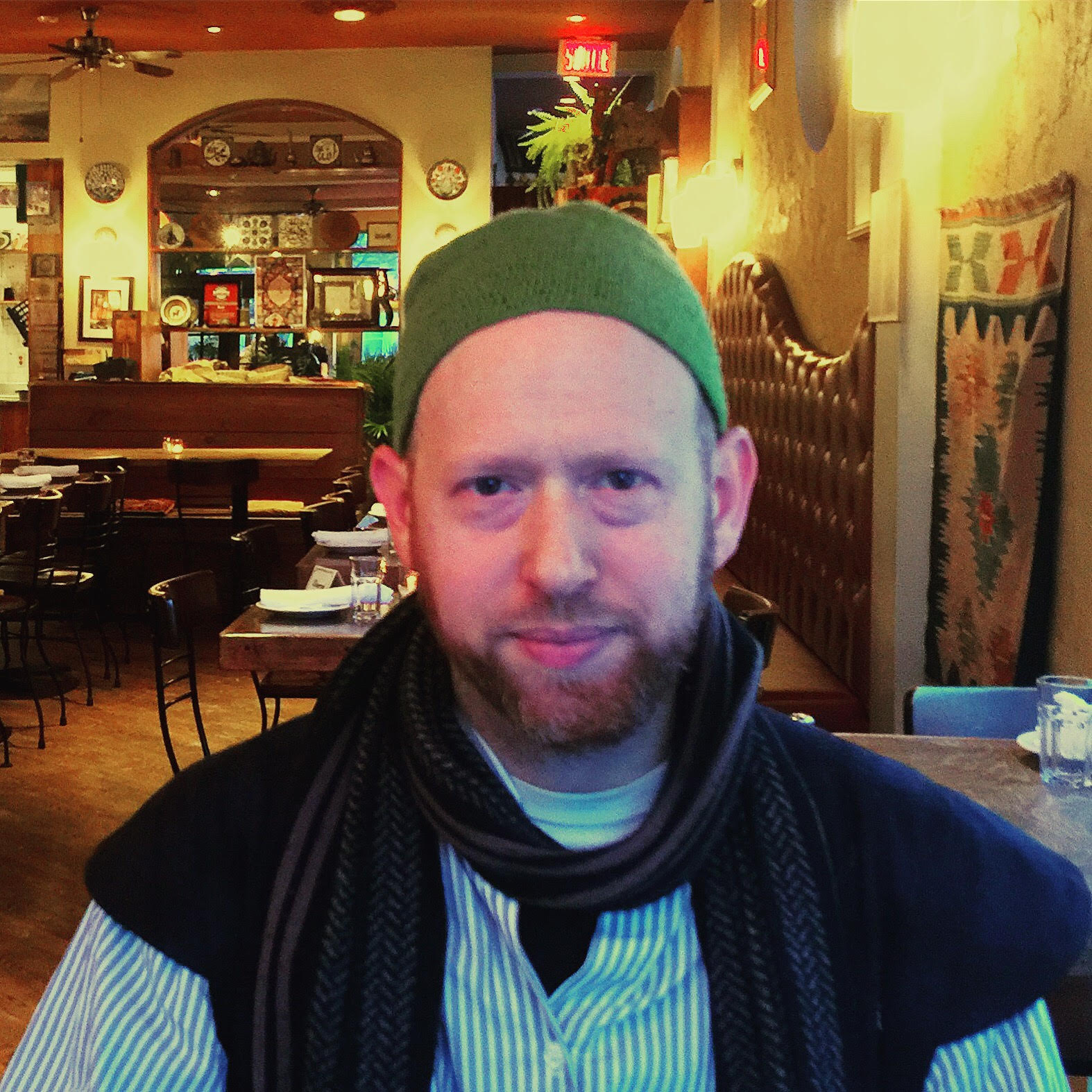 “Every human is on a path. Every path is similar; every path is different. We are all seeing the moon. Some see it from one side, others see it from another side, but it is still the moon.”

Jonathan has traveled internationally to places important to the story of the Naqshbandi Sufi order to which he belongs. He travels to Michigan several times a year to meet with his spiritual master, Shaykh Muhammad Hisham Kabbani.

He participates in the weekly dhikr (communal meditative devotional practices, reciting the names and attributes of God) at the Montreal Sufi Center in the Mile End, a short walk away from Rumi Restaurant.

“I also have daily practices. When I don’t pray, I feel it: something is off. It’s not a burden: it is good for the body and the soul, it moves the 360 joints of the body. It is a physical practice and a spiritual practice. When you go into prayer you enter into the presence of the greater, of God, of the divine, of Allah. It has an effect on the heart. We pray to wake up the heart, to make the heart come alive.”

Because he has been traveling extensively with his wife Siham (to Morocco, Cyprus, and Istanbul), Jonathan has not paid close attention to the controversy in Outremont over the borough council’s ban on new places of worship and the referendum affirming that ban in November 2016.

“We have a saying that says that we were created from different nations and tribes to know one another. Diversity brings flavour. If there are more differences, we learn more. We do live together, and we should be able to live together. We have to say to ourselves, ‘Be at peace.’ We have to be at peace, first with ourselves, and also with one another. Each of us has our own understanding, and we have to be tolerant of the understanding of others. That is essential. And we have to protect one another in this.”

Jonathan finds it difficult to evaluate the ban on new places of worship. It is a complicated issue, and he is neither familiar with the law nor a city planner. He wants to presume that the city of Montreal and the borough council would have considered all the relevant laws and would have made all the necessary studies.

“We should do our best to accommodate, but it gets tricky. We have a government, we should respect the government, but as things change, how do you keep everyone happy? It requires compromise on all sides.”

Earlier this week Janet Epp Buckinghom wrote in Convivium that, “The shock wave from the Quebec City mosque tragedy might at last jar loose public recognition of what Quebecers themselves privately know: Quebec has a religion problem. Or perhaps better, Quebec has problems with religion.”

For the province to address these problems honestly and effectively, we citizens will have to learn how to compromise also at the most local levels of government. We may find valuable lessons in this regard in the practices of religions long devoted to the practice of companionship.

A Symbol of Hope

A parachute that brought supplies and the hope of liberation to a family in the Netherlands during WWII has since been repurposed into a baptism gown with an even greater meaning of hope.

Liturgies of the Moment

Convivium’s Hannah Marazzi learns from author Douglas McKelvey how we can make every moment holy by seeing even milk, honey and coffee as worthy objects of liturgy.