This story originally appeared in The Banner.

When little Ethan Mark Heerema was baptized in Talbot Street Christian Reformed Church in London, Ont., last month, he was the most recent family member to wear what has become a family heirloom. His baptismal gown dates back to 1946—but the fabric it’s made from goes back a year earlier, to a silk parachute attached to food supplies dropped by the Allied forces just before the liberation of the Netherlands from its occupation by Nazi Germany. 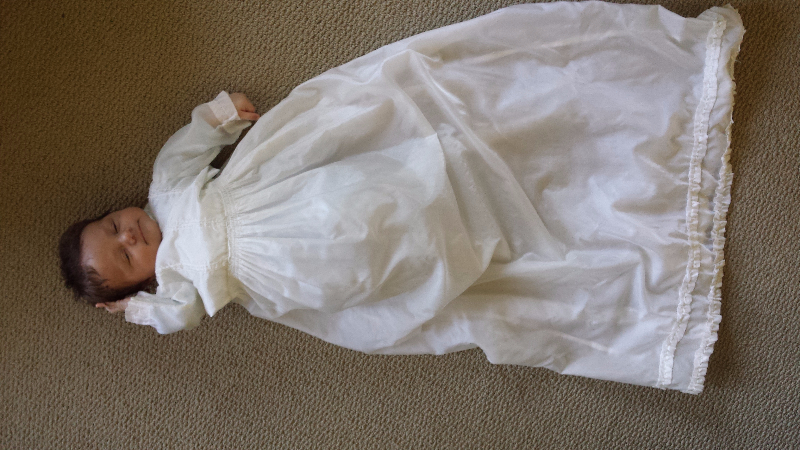 Ethan Heerema is the most recent in a long line of babies baptized in a gown made from an Allied forces parachute at the end of World War II.

Ethan’s great-grandfather, Bert Lubberts, found the dropped supplies in a field on his family farm in the spring of 1945. He ran to share the good news about the food and the hope for liberation; long after the food was gone, though, he kept the parachute as a reminder of the joy of that morning.

With fabric scarce in post-war Europe, a friend made baptismal gowns for the girls out of that silk parachute, a symbol of even greater promise and joy.

Since then, the baptism gowns have been used in over 30 family baptisms, including Jane’s and Janie’s younger siblings, and many of their children, grandchildren, and even great-grandchildren.

Ethan’s parents, Bart and Allison Heerema, have used the gown for both of their children. Bart is the son of Jane, one of the twin girls. “It truly is awesome,” said Jane Heerema, reflecting on the story of her baptism gown and the meaning it has in her family.

“God is always faithful. My parents were always totally unashamed of their faith, and that legacy has carried on through to our children and our grandchildren,” said Jane.

Anita Brinkman is The Banner's regional news correspondent for classes Chatham and Huron.

Is it possible to find peace and calm in a world of chaos and confusion? The idea of being a peacemaker is difficult, but also a relief.

Belonging is Where it Begins

For Christian Horizons CEO, Janet Nolan, it is all about fostering a sense of belonging when it comes to caring for people with exceptional needs.