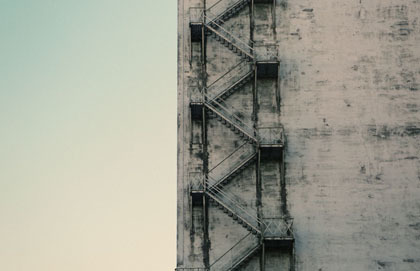 Sam Kolias has a "rags to riches" story with a twist.  From his humble beginnings, Sam carried forward his family's values, principles and Christian faith into his business, all of which have been central to his remarkable success.  But this is no ordinary success story.

As the Chairman and CEO of Boardwalk Rental Communities, Sam received the prestigious  2016 Distinguished Business Leader Award, which is presented annually by the University of Calgary Haskayne School of Business and the Calgary chamber. The award is given to successful leaders who have built their businesses by prioritizing people and ethical practices.  Boardwalk now has over 200 multi-family communities and 32,000 residential units in Alberta, Saskatchewan, Ontario and Quebec, and the company has a market capitalization of $2.4 billion.  Recently, Sam described his life journey to a group of Christian business people at a Corpath event in Calgary.

His grandparents and parents helped provide Sam with the five priorities that have guided his personal and business life:  Faith, Family, Friends, Fitness, and then Finances.  His faith and family were the foundation for his life.  He recalls a time when his large family sat around the dinner table and there was no food in the house. Not a scrap. His grandfather was about to lead the family in a prayer of thanks. Someone asked, "But grandfather, how can we give thanks when there is no food to eat?"  Grandfather insisted on praying anyways. There was a soft knock at the door. A stranger was outside with his family in a broken down carriage behind him, and he asked for help.  Grandfather was a mechanic and sprang into action to help.  As he began working on repairing the carriage, the grateful owner said, "We don't have any money to pay you, but we do have food."

It was a lesson Sam never forgot.  Helping others, seeing everyone as family in community, these values were modeled for him, and he models them within his family and his company. Now they are also the corporate values of Boardwalk.

It was 1983, and at the age of 21, Sam graduated from the University of Calgary with a Bachelor of Science in Civil Engineering.  But Alberta was in a deep recession.  Despite there being no jobs, and with the outlook bleak, Sam and his brother Van listened to their parents who encouraged them to start what has become Boardwalk Rental Communities.  His father, a Greek immigrant, was a bricklayer, and also a small landlord.  His hard-working ethic and entrepreneurial spirit helped his sons launch out with their own business.  He also provided them with a $50,000 loan.

The economic situation was not optimal for starting a business, especially one in real estate.  Calgary's unemployment rate was over 10 per cent, and interest rates were double that.  But Sam and Van used the loan for a down payment on a 16-unit rental property, and quickly filled it with renters.  They continued to buy and rent properties, and defied the economic odds to grow the company.

Success came quickly for Boardwalk.  By 1993, when Sam was enjoying the expensive sports cars, the lavish vacations, the executive home, he began to ask some deep questions. "Why do I feel so empty? I have all the "stuff", but I feel I have a huge hole in my soul."  His life was out of balance. He wasn't eating well or sleeping well.  The company owned him.  Another poignant lesson came along, this one from his young daughter.

One morning, his daughter asked him, "Dad, why are you leaving for work?"  He answered, "To pay for all this stuff, this house, all your toys."  "Dad, I just want to play with you. I'd give up all my toys to be with you."

But the company demands were increasing as the company grew. In January of 1994, Boardwalk Rental Communities went public on the Alberta Stock Exchange, giving Associates an opportunity to own part of the company for just $0.0675 per share (accounting for two stock splits). During that year, Boardwalk purchased more than 1,000 apartment units in Calgary and Edmonton, Alberta.

In the run-up to this milestone of "success", on January 7, 1994, Sam had a dark night of the soul.  He looked at his wealth and began to wonder why he had it, and why so many others had so little. He felt empty and lost. He got down on his knees and prayed, "Jesus Christ, you can have it, all of it. The business. The money. I'm miserable. I don't know what I should be doing."  This was the spiritual crisis and full surrender to God that changed his life.

Sam likes to quote Mark Twain who said the two most important days in your life are the day you were born, and the day you figure out why.  God was at work in the background for Sam, and through his close friends who had met Mother Teresa, he was introduced to her writings. He was struck by the simplicity of her life and the clarity of her purpose.  She was fully committed to serving others.  In her writings, Sam read that at the end of life, we will not be judged by how much money and success we have earned.  Instead, we will be judged by Jesus' words in Matthew 25, "For I was hungry and you gave me nothing to eat, I was thirsty and you gave me nothing to drink, I was a stranger and you did not invite me in. I needed clothes and you did not clothe me, I was in prison and you did not look after me."  This is Christ in His distressing disguise, wrote Mother Teresa.

Sam began to find his purpose.  He met the head of the Jesus Loves You Society soup kitchen, which was across the street from his office. He began volunteering there to wash dishes and serve lunch to single moms and their children.  Then he and his family were invited to go on a life-changing missions trip to Mexico to build houses.

"Something happens when we serve the poor," Sam told the group. "We are in the presence of our creator."  He recalled that his kids enjoyed the time in Tijuana more than their visit to Disneyland on the way home.

Sam was raised in the Greek Orthodox Church and he married Melissa, a Roman Catholic.  Sam became a Roman Catholic, and he and Melissa have focused on living out their faith before their four children, and the company, as their own parents had done.  At Boardwalk, the values of helping others and giving back to the community are now part of the company's DNA.  Everyone is treated like family - the company employees, the customers, the partners and investors, and the company has an extensive social commitment to the Calgary community.

At Boardwalk, the 1400 staff are treated like family members.  Sam donates his salary to scholarships for his employees' children for post-secondary education. The values of treating people like family extend from his employees to the Associates who manage the rental properties, and to the residents.

From that early experience of his grandfather fixing a broken carriage, to watching his parents always ask "How can we help?" in their community and church, Sam has adopted that question as part of the core values of Boardwalk.  For their customers, Boardwalk's  "How can we help?" attitude has earned the company the nickname, "Canada's friendliest landlord."

Boardwalk goes beyond even those stakeholders to exercise active social responsibility in the communities where its properties are located.  The company has a Director of Community Development, and a Director of Community and Corporate Culture.  Boardwalk also has an internally funded rental subsidy program that allows them to waive rental increases for residents facing financial hardship.

For Sam, the issue God has laid on his heart deeply is that of homelessness.  As the CEO of a company that provides "homes" for thousands of renters, the idea of home and the tragedy of homelessness has propelled him to become involved in Calgary's 10 Year Plan to End Homelessness.  He has provided affordable housing for the recent influx of refugees, for the victims of the Fort McMurray fire, and he has formed partnerships with other agencies and organizations in Calgary to push forward a multi-pronged effort to address Calgary's affordable housing shortage and homelessness needs.

In the Calgary media, Sam has been described as "sharp, hard working, successful, caring, self effacing, humble and respectful".  But this does not fully reflect who Sam Kolias is.  Faith and work are intertwined, as his personal and professional values are one and the same. He is a leader who is seeking to fulfill Christ's challenge in Matthew 25 personally, and through Boardwalk Rental Communities as well.

So in Sam's rags to riches story, what was the twist?  Sam went from a humble beginning to wealth and success, and then to the spiritual riches of giving back, seeing every person as part of the family, building true community, and bringing people "home." You could say, "rags to righteousness."