It sounds like the start of a joke, but it was a most serious effort to bring 58 Jews, Christians and Muslims from Canada to Israel and Palestine to see for ourselves the complexity of three religions and two nations trying to live together in one land. What we witnessed and experienced in early September, as we went on what we called “The Path of Abraham” was intriguing and enlightening, fascinating and frightening, disturbing and disconcerting.

Father Damian Macpherson, Imam Abdul Hai Patel, the Rev. Dr. Karen Hamilton, Rabbi Baruch Frydman-Kohl and Judy Csillag have worked together in interfaith activities in Toronto for many years. Earlier in 2011, the five of us decided to bring others along our path. The oldest member of our group was an 85-year-old Indo-Canadian of deep Catholic faith. The youngest were five students from Marc Garneau Collegiate, who were using this trip as a platform to bring a new model for inter-group relations back to their Toronto high school.

We deliberately sought out conflicting narratives. So we brought Jews to Jenin, where a few years ago the Israeli-Palestinian conflict made this one of the most deadly of cities, to listen to the regional governor from the Palestinian Authority. Then we took Muslims and Christians over the “green line” to Gush Etzion, the mother of all post-1967 settlements, to hear from the mayor of this community in Judea. We went together to Bethlehem, where a wall divides the city, but in Hebron, the City of Abraham, we entered the Tomb of the Patriarchs and Matriarchs from Muslim and Jewish entrances.

We brought Muslim women in niqabs to stay in a kibbutz founded by survivors of the Holocaust and spoke with Israeli Muslims in hijabs on the streets of Nazareth and Jerusalem. We met with East Jerusalem Palestinians and learned of the difference in outlook and political orientation between them, Arab citizens of Israel and residents of the Palestinian territories. In Haifa we learned how coexistence in that city differs from Jewish-Arab relations in Jerusalem or the Galilee. And in a Catholic school that also teaches Christian and Muslim students to live together we met with a proud member of the Druze community who serves in the government of the State of Israel.

We reflected about the life and death of Jesus in the Church of the Nativity, on the Mount of the Beatitudes, in the Garden of Gethsemane and in the Church of the Holy Sepulcher. In Capernaum we learned of the role of the ancient synagogue in giving birth to both the church and mosque. Along with our Muslim pilgrims, we went up to Haram al-Sharif, where they prayed in the al-Aqsa Mosque and Jews were prohibited from public or private prayer. We celebrated with Christian friends their baptismal reaffirmation in the Jordan River, danced together and apart (in separate male-female sections) at the Western Wall as the Jewish Sabbath began, and walked the Via Dolorosa as a mixed multitude.

The politics and polarities of security and human dignity were constantly with us. We passed through some checkpoints with ease and were stopped at another for two hours. We met with a Palestinian-American whose husband was killed in a disputed altercation with Israeli police in 2009 and a seventh-generation Jewish Israeli whose daughter was blown up in a terrorist attack on a pedestrian mall.

Jews, Christians and Muslims together toured the Temple Tunnels, whose opening helped to trigger the first intifada. We reflectively walked though Yad Vashem, the Israeli Holocaust Memorial and Museum, and listened to a childhood friend of Anne Frank tell of her Holocaust survival and the death of her best friend.

We walked through ultra-Orthodox and Arab neighbourhoods in Jerusalem and some of us rode on the new light rail (which took much longer to construct than the St. Clair line in Toronto) that passes through East and West Jerusalem, joining Arab and Jewish sections both beyond and within the disputed borders of the city. We saw that gentrification takes place in Jaffa and the old Neve Tzedek neighbourhood of Tel Aviv just as it does in downtown Toronto.

What did we learn? That the Holy Land breeds intensity. That simplistic ideas such as boycotts break down in the face of real people buying, selling and consuming each others’ products. That the biblical ideal of hospitality is still operative. That each religion has truth-claims which we ignore at our own peril. That each national group feels its cause is just. That the security barrier that protects Israelis — whether in the form of a wall or a fence — challenges the personal dignity of Palestinians. That despite the political disagreements, most people find ways to live with each other. That this is not a “tale of two cities” but a much more complex, multi-dimensional narrative affected by religion, nationalism, history and geography.

And we discovered something about ourselves. We were noticed as Canadians and stories preceded our visits in some places. Not just because we sang “O, Canada” as we raised a Canadian flag while cruising the Sea of Galilee. But because wherever we travelled, people wanted to know about this unusual group and how life in Canada enabled us to imagine the possibility of Jews, Muslims and Christians travelling together to learn about, with and from each other. Now that we have all returned to our own communities, the real work begins. 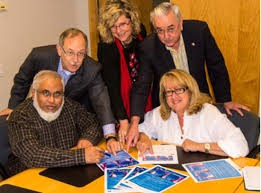 Originally published in the Toronto Star, Canadian Jewish News and the Catholic Register.

The Canadian Race Relations Foundation will hold a symposium in Richmond, B. C. this Thursday on whether cities in this country are doing enough to combat intolerance, including toward religious faiths. We sat down with CRRF Executive Director, Anita Bromberg, to discuss the upcoming event.

In January 2015, the unemployment rate in Alberta was hovering around 4.6 per cent. Today, it is almost double that at 8.8 per cent. The Canadian Poverty Institute at Ambrose University is searching for solutions to end poverty.

Belonging is Where it Begins

For Christian Horizons CEO, Janet Nolan, it is all about fostering a sense of belonging when it comes to caring for people with exceptional needs.