As one-half of Canada’s most famous evangelistic duo, John Hunter’s mesmerizing preaching and dramatic delivery attracted the attention of hundreds of thousands of Canadians—including the nation’s first prime minister, Sir John A. Macdonald. Hunter’s forte was Bible exposition, using extemporaneous preaching with theatrical overtones. With an actor’s sense of informed improvisation, he drew on his surroundings to enliven and enrich his message. In this way, he tried to make religion a vital and attractive force capable of changing lives.

“A man who was single-minded in his determination to transport his listeners to the gates of heaven.”

John Edwin Hunter was born in Durham County, Ontario. Fifteen years later, he was born again. Hunter’s conversion during a backwoods Methodist revival meeting marked a new life in Christ and the beginning of a lifelong passion. Hearing God’s call to preach the gospel, he responded immediately.

Hunter returned home and began to witness to his family. In a short time, his father, mother, four sisters, and two brothers followed his lead to conversion and joined the Methodist Church. This initial success was a sign of things to come.

At Victoria College in Cobourg, Hunter’s zeal for evangelism burned bright. No opportunity was wasted; even train trips to and from Cobourg were used to attempt the conversion of his fellow passengers. At college, the exuberant young preacher met another budding evangelist, Hugh Crossley, and the two quickly became friends. Together, they organized meetings for their fellow students and were soon fanning the flames of revival in Cobourg.

Ordained as a Methodist minister, Hunter subsequently served in several churches. However, at the first opportunity he requested the position of full-time evangelist. The church agreed, and in 1884 he and Crossley were reunited in a joint evangelistic mission. In the years that followed, Crossley and Hunter would become—in terms of the number of converts—the most successful Canadian evangelistic team ever.

Their early successes were remarkable. During the course of a month-long campaign in Toronto, it was estimated that the duo held fifty-five meetings and spoke to between seventy-five thousand and one hundred thousand people. A revival in Ottawa in 1888, however, would dwarf even these early successes.

That winter, Canadian prime minister Sir John A. Macdonald attended the Crossley-Hunter services along with several senators and members of parliament. Macdonald, in fact, celebrated his seventy-third birthday at a service. On the final night of the six-week revival, it was requested that Crossley and Hunter remain for one more week, and Macdonald asked if he could second the motion. That same evening, a significant event occurred in the life of the hard-drinking prime minister, who during the election of 1878 had joked that Canadians preferred him drunk to his opponent—the pious Alexander Mackenzie—sober. As a newspaper reported: “When in answer to an appeal by Mr. Hunter, that all who wished to become Christians and desired the prayers of the audience would stand up, the premier of the Dominion … arose with his wife.” According to another journalist, “When the well-known form of the Honourable Premier arose in the centre of the church many strong men bowed their heads and wept for joy. The right honourable gentleman himself was deeply affected.” After dining at the prime minister’s home several days later, Hunter confirmed that “Sir John is a changed man.”

The message that drew the prime minister appealed to Canadians from all walks of life. Listeners were encouraged to turn from their sinful ways, to commit their lives to Christ, and to help make Canada a Christian nation, a land that could truly call itself God’s dominion. The support of mayors, members of parliament, and especially the prime minister was central to realizing that goal. 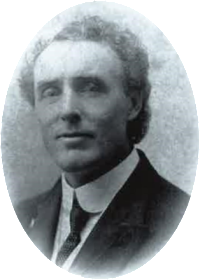 Hunter’s mission was to share the gospel with as many people as possible. He used a variety of mediums of expression, including several pamphlets of his own authorship. He was, however, most at home behind the pulpit. While his partner took a calm, quiet approach to preaching, Hunter was constantly on the move. In the words of one reporter, he was a hotbed of enthusiasm, active on his feet and ready with his tongue, a restless spirit who does two hours work in one.” As far as Hunter was concerned, not a second should be wasted when ushering souls into the kingdom.

He was neither a theologian nor an intellectual, but he was a genius in his ability to read human nature and to adjust to the conditions of each meeting. His remarks were often sprinkled with jokes and funny stories. Hunter improvised as he preached and, in so doing, displayed astonishing theatrical instincts. Often, he would elaborate on a passage of Scripture or read a suitable story.

“The Heavenly Railroad” was among his favourite stories. Purported to be true, it related a conversation between a young girl and a conductor. The child had boarded a train convinced that she was bound for heaven to visit her dead mother, who had sung to her of the railroad to heaven. When she learned that the conductor had a daughter who had recently died, the child asked, “What shall I tell your little girl when I see her? Shall I say to her that I saw her pa on Jesus’ railroad? Shall I?” In an era when death was ever present, this testimony to a child’s innocence and faith prompted mothers and fathers to examine their hearts and to consider their example to their children.

Hunter conducted a gospel train of his own, carrying his listeners from the heights of joy to the depths of grief. The thoughts of the audience were directed by its engineer, a man who was single-minded in his determination to transport his listeners to the gates of heaven.

His zeal for evangelism brought new life in Christ to thousands. But it took its toll. Hunter’s hectic schedule shattered his fragile health, and as a result in 1910 the Crossley-Hunter revival team disbanded. Only fifty-four years of age, the esteemed revivalist quietly retired to his home in St. Thomas, Ontario. He died nine years later.

In eulogizing Hunter, the Reverend S. D. Chown spoke for the Methodist denomination, observing that the “Reverend J. E. Hunter was a man possessed of a consuming passion for the saving of souls, a passion which wore out his nervous and physical constitution long before his sun ordinarily should have set.”

Love That Wrestles the Imperfect

For humans in this snow-globe of a planet, where war-shaken cultures are being rapidly dispersed across the continents, to love means to keep re-engaging with each other, writes Voices contributor Karen Esau.

The Power of Humility