“Something [Outremont borough counselor] Mindy Pollak’s mother said has become our motto: ‘We might have lost the referendum, but we have gained a community.’ This community is an overlap place,” Leila Marshy says.

“We carved out a trench, and we realized: ‘Oh, we can all fit in here. We go home, and then we join up again in this place, and it is a safe place, and this place is getting bigger and bigger.’”

Leila’s father was a Palestinian refugee who wanted to go to New York City. There was an American army base in Newfoundland and he thought if he worked at the base he would get a ticket to the United States. Instead, he met Leila’s mother, moved to Montreal, and they had five children. 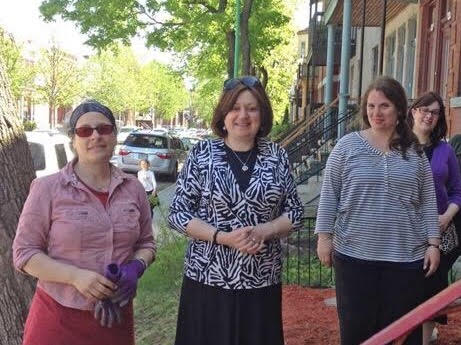 When Leila was in her twenties she studied for a Masters degree in Cairo, worked for the Palestine Red Crescent, traveled all over the Middle East, came back to Montreal, worked in film, and had a daughter. In 2008 she and her partner moved to Hutchinson Street, the dividing line between Montreal’s Mile End and Outremont neighbourhoods.

“And so there were all these Hasidim! I was fascinated, but I didn’t know what to think. And then one day the thought came into my mind: Isn’t it amazing that in the 21st century, in the Western world, in one of the biggest cities in Canada, we can have among us this insular community. I thought: this is such a good example of the best of humanity. This to me was civilization, was civility. This is why we are human, why we are humane. This is what we do. We can have such little enclaves. We protect each other. Our laws, our behaviour: we give space.”

From what Leila had heard and seen, the parts of Outremont and Mile End nearest to Avenue du Parc were not in great shape in the 1980s. They were filled with “dives, dumps, and crack houses.” As the Hasidic community increased its presence, its members bought up properties in poor repair and upgraded them. Hasidic families established a day-in and day-out presence on the sidewalks of these neighbourhoods, As Jane Jacobs, the doyenne of urban activism, suggested would be the case, the “eyes on the street” of the Hasidim made local sidewalks “equipped to handle strangers, and to make a safety asset, in itself, out of the presence of strangers, as the streets of successful city neighborhoods always do.”

Or in Leila’s words: “They may not be wearing high heels or driving Saabs, but the Hasidim have improved the value of these neighbourhoods.”

One warm day as she was sitting on her balcony, Leila noticed people stuffing leaflets in mailboxes along Hutchison Street. They had previously canvassed against the Hasidic community at her own front door. As she watched from her balcony, she noticed that they bypassed every home displaying a mezuzah (a little box containing parchment inscribed with words from the book of Deuteronomy). She felt goose bumps on her arms as she realized that they were avoiding the Jewish homes on her street. In that moment, Leila turned from being a passive spectator into someone compelled to action. 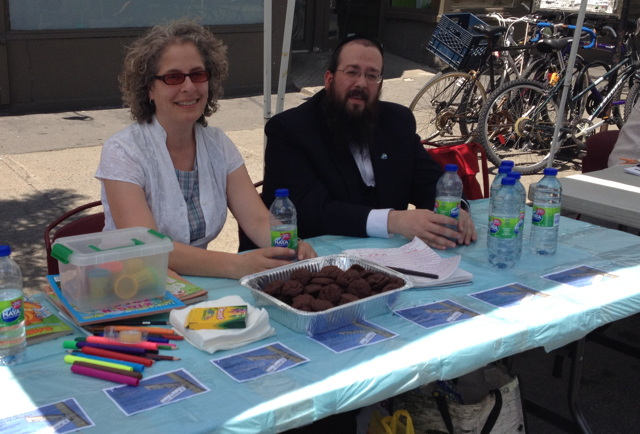 She had earlier received a postcard from the synagogue on her street, alerting her that they were going to have some renovations and extensions done to their building. She had paid little attention it, sticking it into her recycling bin. The leaflet that she saw being distributed fulminated against these renovations and extensions. Then and there, Leila went to search through her recycling bin, found the postcard, and starting designing her own leaflet to argue in favour of the synagogue construction. She printed about 300 copies, and distributed them along the street.

Mindy Pollak and her mother contacted Leila in response to her pro-synagogue leaflet. A neighbourhood referendum had been called against the synagogue construction. Leila and the Pollaks worked to mobilized support for the synagogue, but their side lost the referendum. Yet out of this crucible their friendship, and the organization Friends of Hutchison, emerged. It is an effort to cultivate greater mutual familiarity and understanding among the diverse people of Outremont and Mile End, and thereby to change what Leila calls (in a post for the blog "Outremont Hasid") “a punitive atmosphere where every Hasidic person is ‘illegal’ and every bylaw that does not restrict them is giving in to their ‘lobby.’”

“We have an opportunity in Outremont to build a unique relationship between the Hasidic community and the surrounding communities,” she says.

Then this daughter of a Palestinian refugee father adds: “My goal is not to make the Hasidim less religious or more secular. It is to find more zones where we can communicate.”

A Challenge from God

Dr. Janet Epp Buckingham, a professor at Trinity Western University and director of the Laurentian Leadership Centre in Ottawa, shares her faith journey and her experiences defending religious freedom in Canada and around the world.

Fields of the Lord

Joanna Geck learned through personal struggle that neither failure nor success has to define her. It’s the undying love of God that defines her, and who shapes her identity.

A Small Lent of Great Love

When taking on a Lenten sacrifice or practice, we ought first to consider our intentions, writes Trevor Anzai.