Francis Bacon reduced charity to “the relief of man’s estate” in 1605’s The Advancement of Learning. In his Theologico-Political Treatise of 1670 Baruch Spinoza maintained that when it comes to Scripture, all that’s needful is simply getting the gist of it, made up of “justice and lovingkindness.” By the mid-19th century, Hegelian philosophy would admit that while Christianity introduced some true new principles to the world long ago, once those have been rationalized and realized we may dispense with as obsolete any remaining aspects of the Biblical tradition that aren’t conformable to worldly progress. Meanwhile, Auguste Comte called outright for a secular religion of humanity.

These are but a handful of signposts in the history of the secularization of Biblical morality and the rise of humanism. Comte’s contemporary, Alexis de Tocqueville, observed that ideas of transcendence were incompatible with late modern democratic mores, and what remained of religion was rapidly descending into a variety of pantheism. More recently, Cornel West proclaimed that “justice is what love looks like in public”—leading me to recall Hank Hill’s response when Luanne Platter channeled Whitney Houston and affirmed that loving yourself is the greatest love of all: “No, that’s not really true at all in fact.” Reducing love to justice, or compelling love to submit to justice, leaves us with neither love nor justice. By making the personal political, we ask too much of justice and not enough of love.

Friedrich Nietzsche recognized that much of modern secular morality is merely Christianity lite, even though its values are unsustainable without the Christian God to buttress them. Of course, those who prefer their Christianity full-bodied will find secular morality unsatisfying, but they still might be grateful that secular moralists have mostly ignored Nietzsche’s boldest inferences. That said, the devout have reason to lament the infiltration and captivity of Christianity by a misbegotten humanistic ideology derivative of it, as what was once an insurrection within Christianity is now upheld as its culmination.

Many churches today substitute postmodern precepts and Marxist preoccupations for the Gospel, or else they conflate these to the extent that they still reference Scripture at all. Some pulpits call for transformative systemic change as if politics were most- and all-important. I don’t wonder whether they’d ask forgiveness for any evils that inevitably attend attempted revolutions.

Mostly though, nowadays, sermons have become lectures on social justice, and fellowship has become one big group hug. I cringe when I see clergy on social media mimicking the mob mentality, preaching outrage, envy, resentment, and vengeance, issuing summary condemnations of heretics and reprobates, insisting that if you don’t participate in the stone-throwing too you’re complicit with evil. It’s an if-you’re-not-with-us-you’re-against-us mentality that turns disputes over policy into fronts in a holy war, pitting purported partisans of the Holy Spirit against the demoniacal.

Ironically, the same people insist on all-inclusive ecumenism when it comes to matters of faith, and approach sin with the most indulgent of attitudes—except for the new cardinal sin of not being so indulgent. They would have their flocks believe that heaven on earth is something that human beings could and would manufacture for themselves if only they spoke in unison and acted in communion. Their congregations continue to dwindle, however, as more people realize that if the churches simply keep repeating all the same things that leading personalities in the media already tell them, who needs the added hocus-pocus mumbo-jumbo?

The Vanity of Foxes
Stage Set For Life

In his formidable new book, The Idol of Our Age, Daniel J. Mahoney examines and confronts the humanitarian “secular religion of our age” that makes man the measure, centre, and end of all things. Humanity now worships itself, believing itself naturally good and capable of everything good if only we are open to each other’s goodness. Mahoney is professor of political science at Assumption College in Massachusetts, a prolific writer who specializes in keeping English-speaking audiences informed about thinkers originating from France and other nations formerly under the Soviet Union’s sphere of influence who defend the liberal tradition against totalitarian ideologies. In The Idol of Our Age, Mahoney writes as a Christian personally, as a Catholic layman specifically, and as a political philosopher professionally. He writes mainly for other Christians about the challenges to Christianity from societies that have separated and distanced themselves from its traditions. Of particular concern is the way the church is susceptible to reincorporating its own deformed births, mistaking rivals and adversaries for members and friends.

Many churches today substitute postmodern precepts and Marxist preoccupations for the Gospel, or else they conflate these to the extent that they still reference Scripture at all. 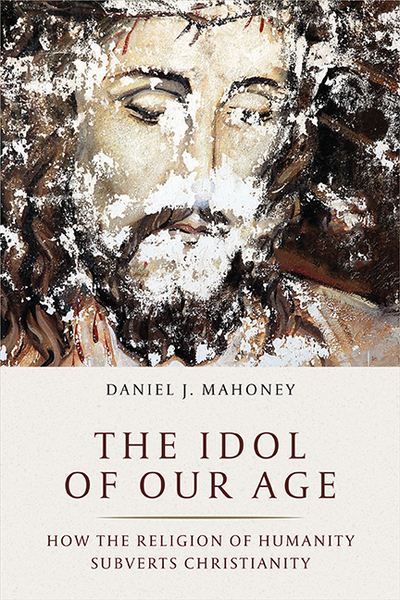 Among the sources Mahoney treats at length in this book are Orestes Brownson, Aurel Kolnai, Vladimir Soloviev, Aleksandr Solzhenitsyn, and Benedict XVI. If you are insufficiently familiar with any of these thinkers, Mahoney will make you want to learn more. Other resources he draws on include Cardinal Newman, Tocqueville, Fyodor Dostoevsky, G. K. Chesterton, Winston Churchill, Charles de Gaulle, C. S. Lewis, Eric Voegelin, Raymond Aron, Alain Besançon, Václav Havel, and Cardinal Robert Sarah. His criticisms target the likes of Comte, Leo Tolstoy, and Jürgen Habermas. Eminent contemporary French philosopher Pierre Manent supplies the book with a foreword that succinctly identifies what makes secular humanitarian ideology, the “ruling opinion” of our times, “so alluring.” Manent writes, “it gives its adepts the certainty of doing good as well as the feeling of being good, all the more so because in the world of fellow-feeling, most of the doing lies in the feeling.”

Mahoney’s commentaries yield a stark portrait of this ideology. Its features include a diminishment of human beings into economic animals who should submit to enlightened elites under statist regimes with post-nationalist commitments portending the eventual unity of humankind. Self-government by particular communities should be surrendered for the sake of social welfare. Civic and intellectual virtues are neither required nor desired. Pacifism should replace courage; responsible action is discouraged; and sentiment should replace judgment. With presentist prejudices and an orientation fixed on the future, we should regard the past as irrelevant except as something to disparage and trust that everything we wish for is possible given sufficient imagination, resolve, and solidarity.

Mahoney explains how this optimistic hope is actually grounded in despair, revealing a lack of faith. Churches now focus on relief for the poor and interpret miracles of healing as if our bodies were all that mattered. Nothing points beyond the material world any longer. Believers in humanity regard misbehaviour as the product of systemic injustice, prejudice, want, and oppression, excusable without repentance. This ideology’s egalitarian relativism is, however, coupled with a moralistic absolutism that cannot bear those who don’t get with the program.

To disagree with the prevailing orthodoxies (for instance, by supporting market-based solutions for economic problems, dreading impending environmental apocalypses insufficiently, or raising concerns about unlimited migration) makes you the rightful target of merciless vilification and personal destruction. Mahoney further relates how plans to impose universal compassion predictably yield more poverty and misery—and, ultimately, tyranny—followed by unending apologetics for said tyranny by those who remain proud of their compassion. Christians on this path, zealously fighting to fix this world rather than trusting in God’s promises, should be cautioned that the hero of their version of the passion play isn’t Jesus; it’s Barabbas. And their post-political dream of a singular authority assuring bread and circuses for everybody is difficult to distinguish from giving into the devil’s temptations in the desert.

The most controversial part of Mahoney’s book is his extended criticism of Pope Francis, who tellingly selected a name he could be the first of. Mahoney gives Francis his due when he finds his writings consistent with Catholic tradition. It’s mostly his unofficial conversations and offhand remarks that concern Mahoney, especially when Francis makes pronouncements regarding empirical matters about which he possesses no spiritual authority. His economics are “para-Marxist” and his ecological sensibilities are sympathetic to those of the Gaians. All told, Mahoney describes the current pontiff as a champion of practically everything belonging to the religion of humanity. At his harshest, Mahoney calls Francis “thoroughly blind to the multiple ways in which the humanitarian secular religion subverts authentic Christianity,” observing that “his unqualified appeals for us to ‘change the world’ have a tendency to ‘immanentize’ the Gospel, to emphasize this-worldly amelioration above the supernatural destiny of man.” He concludes that under today’s leadership, the Church “continues to ‘kneel before the world.’” In the spirit of generosity, Mahoney makes excuses for Francis’s predilections, saying that he must be confused, forgetful, unaware, incautious, or misguided. It would certainly be uncharitable if Mahoney swore that Francis did all of this on purpose and by design. It’s a relief that he assures us Francis is “no Antichrist to be sure.” He’s not that extraordinary. He’s just “half-humanitarian.” Maybe that makes Francis sound like a lukewarm semi-Christian, but at least at half and half it means he only places the idol of abstract humanity beside God instead of before Him.

As a non-Catholic layman, I shall abstain from confirming or protesting Mahoney’s depiction of Francis. I can attest that Mahoney is the kind of Christian who understands that the parable of the Good Samaritan does not dictate foreign policy and that the Sermon on the Mount is no basis for domestic policy. He appreciates the proper distinctions between the things that belong to Caesar and the things that don’t, as well as the blessings of living under a constitution that opposes Caesarism. As an account of the ways in which the earthly and heavenly cities tend to get fused and confused these days, I recommend this book with enthusiasm.

The Vanity of Foxes

Actress Mindy Kaling voiced a pro-life message at a recent college commencement when she described letting go of her rigid “life checklist” in order to give birth to a baby girl, writes Cardus Family Program Director Andrea Mrozek.