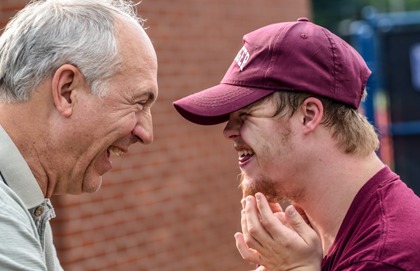 The King will reply, “Truly I tell you, whatever you did for one of the least of these brothers and sisters of mine, you did for me.” -Matthew 25:40

When I was young, our family had this ragged, blue hardcover collection of Dutch folk tales. They were English translations, and real gems. One of my favourites told the story of a king and queen who wanted to reward their most noble subject, but first they had to find him or her. They went out into the surrounding village to see how well they would be received and by whom; of course, everyone dropped what they were doing and rushed to flatter the royal pair as best they could. At the edge of the town, however, they found an awkward young peasant girl who didn’t properly bow before them, was at a complete loss for words, and managed to spill a small glass of water—the only gift she could give them—all over the King.

Unhappy with all the flattery, the king and queen devised another test. They disguised themselves as peasants and, leaving the castle through a back door, proceeded through their Kingdom once again. Invisible to almost all, they were not greeted or offered anything to eat or drink, until they returned to the young peasant girl’s home where they were once again received graciously.

The story is simple, perhaps, but I love it for two reasons. First, the inversion upon which it turns is the subtle brilliance of an otherworldly logic: “Who is the most in the kingdom?” can only be answered when we know who is willing to serve the least.

But what happens in a society that plans for the systematic elimination of those that it deems the least? And since today is World Down Syndrome Day, I’m particularly thinking of a society, like that of Denmark, which boasts it will be rid of children with Down Syndrome by 2030. Before we point fingers, today in the US, over 92% of pregnancies which test positive for Down Syndrome are aborted and the numbers are comparable in Canada. Hitler hardly had a more efficiently diabolical way of accomplishing the eugenic program championed by so many Western countries other than Germany.

Of course, the argument here is about the sanctity of all life, and it must necessarily go there, but it’s important to first question what we lose in our shared lives if Denmark's dreams for 2030 would be realized there and perhaps elsewhere over time. While the account books might show increase, we have a diseased and reductionist way of accounting if that is all we measure for in a healthy society.

In 2009, I began my first teaching job in a small school north of Hamilton. As a teacher, you soon learn that classes have a certain “collective spirit” and, since the school contained grades K-12, it was interesting, when we got together as staff, that we frequently praised one class in particular for their rather uncommon charity. This class was filled with students who were empathetic—always looking out for the kids who didn’t quite fit in—and this trend had started in their earliest days together. There may be many reasons why this might have been, but I’m convinced (and others were as well) that it had a lot to do with the fact that this class was the only one which had a girl with Down Syndrome fully integrated into their daily routines since they were all five. They were not uncomfortable with her as so many grow to be, and on several occasions I saw boys in the rougher crowds take the time to hold a door and say good morning to this student as she went past.

This connects to the second reason why I love that story of the rulers and the girl: dressed as peasants, the couple inverts our expectation of what the royal image might be. The rulers are on the move, giving their subjects the chance to test their mettle and practice resurrection.

When we look back at how people with Down Syndrome have been treated, we find an ugly trail of segregation from society, indefinite placement in institutions, frequent torment and castings out. We find boys and girls denied personhood, often abused, and sometimes killed. Today, we’ll find that most won’t even see the light of the day. On days such as this, in a world such as ours, we can thank God for institutions like Christian Horizons who articulate a view of the person who is far more than a mere cost-benefit analysis.

In 2006, I was privileged to find part-time employment at CH, working with men who had varying physical and mental disabilities. I remember my first day being uncertain around these men who didn’t look, sound, or act, “normal” as I’d come to understand the word. They weren’t like me, that is. Yet over the months I was there, I saw how these men – who were often as vulnerable as my children – were so uninhibited by peer pressure, so unconditional in their affection, so impossibly energetic and enthusiastic about little joys. Ironically, they weren’t really like me in many ways; and I had a lot to learn.

Among other things, I had to really learn what Christ meant when he talked about the “least of these.” After my time at CH, I would say that these men were mirrors, reflecting who truly was in need: me. And that might just be the key; we reflect each other as so many fragmented images of the King. If we can remember that we are all image bearers—impressed from the dirt, expressed by the King’s creative word—we start to realize two things: no matter our station, we are all draped in the guise of peasants, but it’s just a guise that hides the traces of royalty for which we’ve always been intended.