Tomorrow’s release of Cardus data on outcomes for B.C.’s public and independent schools will also showcase the “exciting example” of innovative schools policy on the West Coast, says the leader of the study.

Beth Green, program director for Cardus Education, tells Convivium the positive news out of the research is the finding of a unique level of collaboration – rather than tension – that B.C. has encouraged among various public and independent school systems through its Independent School Act.

The range of impacts of those various systems on the graduates they produce will be supported by data to be presented Wednesday evening at the Mary Pattison Chapel in Surrey, B.C.’s Pacific Academy.

An Ontario report, based on similar data for that province, is set for release later in October.

Our Children, Our Future: Educating for Tomorrow is the culmination of two years of work growing out of a 2016 national study that was broader in scope but less data-rich, Green says. The Cardus Education Survey 2016: Educating To Love Your Neighbour, aimed to provide a "fuller picture of Canadian graduates" its authors said at the time.

“Too many studies of graduate outcomes provide a reductive analysis of how well education prepares one for a good job,” they noted. “While this matters, our report enfolds graduate job and income findings into a much broader, multi-dimensional focus that additionally looks at the school effects on political involvement and religious orientation, habits of home and social ties, levels of trust in institutions, and how much a graduate gives of his or her time and resources.” 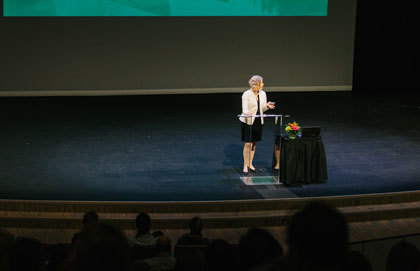 The idea was to go beyond a two-dimensional analysis and give a fuller picture of how Canada’s graduates are being prepared for adult life together.

The idea was to go beyond a two-dimensional analysis and give a fuller picture of how Canada’s graduates are being prepared for adult life together.

The 2016 report categorized and commented on several Canadian educational streams, including:

Green, who holds a DPhil from Oxford as well as a strong background in both teaching and education research, previously directed the National Centre for Christian Education at Liverpool Hope University in the United Kingdom where she also ran the Professional Doctorate in Education. She is a Fellow of the Royal Society of the Arts and also a graduate of Cambridge and London Universities.

She has an international reputation for her expertise in religious school ethos; leadership and management; teaching and learning and social theory in education. She regularly publishes her empirical research in international journals including the British Journal of Sociology and Education and the Cambridge Journal of Education. Her consultancy regularly takes her to Europe and Australia where she advises on effective approaches to measurement, professional development, and pedagogy in the religious school sector. Dr. Green is a former high school history teacher who has worked in both government and non-government schools in the U.K.

Apart from that, she is a “committed Christian,” who researches in a manner to help in the understanding of “how religion works in public space.”

The site for tomorrow’s presentation is interesting for several reasons, not the least of which is that Surrey happens to be the location of several strong Christian schools of various stripes. And alongside, there are a number of other large faith-based schools associated with south Asian and Middle Eastern-rooted religions. Adherents of those religions, in recent years, have increasingly populated the city of 530,000. As well, Surrey has a robust public school system that has been pressed at the edges to accommodate the city’s growth.

Convivium contributor Lloyd Mackey was at the release of Cardus data on West Coast educational innovation this week as program director Beth Green explained what the numbers reveal. The news is good. The challenges are real, Green says.