Last May, Convivium published my essay on groups, institutions and the space they can provide for developing the 'habit' of democracy. It touched on a number of issues (including patience, understanding and other necessary ingredients for genuine human connection). Primarily, it summed up a collection of data that emerged this past spring that explored two connected trends.

The first is less than comforting: the continued rise of social polarization in the United States. This doesn't come as a surprise to anyone paying attention to North American public life. Still, there's something disheartening about seeing hard data on the increasing gap between people living in different social, political and cultural contexts. This has, less than shockingly, gone hand in hand with a rise in widespread social disengagement with the 'other side' (whoever that happens to be). More often than not this leads, at best, to systematic misunderstanding and, at worst, to animosity, dehumanization and even hatred.

The second trend is that the communities where polarization hadn't taken root shared a common trait: the protective effect of small-scale, democratizing institutions. Think community clubs, religious groups, sports teams and the like. They are where people from different backgrounds, traditionally speaking, have been able to encounter each other in an informal, friendly context, allowing for them to build connections with those they, for a number of reasons, might otherwise dismiss or ignore. While the disappearance of these spaces is alarming, knowing the positive impact they have on communities can be empowering for those who actively work to heal the consequences of societal polarization.

Looking at the data in isolation can suggest that, if groups and institutions make us better citizens, all we need for a better world is to minimize the individualistic forces that eroded these institutions in the first place. This is in fact what Yoni Appelbaum, arguing in The Atlantic, called the very habit of democracy: the ability to set aside individual preferences for the sake of a common good. But as history has abundantly shown, not all instances of collective behaviour are conducive to the betterment of the human family. If we aim to develop healthy groups promoting democratic behaviour, then, we need to understand how groups work and where potential trouble spots can be found.

One good place to start is the research of social psychologist Jonathan Haidt, whose 2012 book The Righteous Mind was animated by these very questions. The book's stated purpose was to explore the reasons 'why good people fight over religion and politics,' and Haidt's conclusions have very much to do with the pros and cons of group behaviour as well as how related attitudes have changed over history.

Building on evolutionary psychology, Haidt suggests that the ability to bind ourselves into groups is one of the things that made us human. Competing as individuals against individuals could only take us so far. The shift to competing in groups against other groups gave some cultures a major edge over others. It allowed for the social cohesion needed to build large-scale societies and, potentially, civilization as we know it.

Group structures provided their members with something they couldn't find on their own: the stability and safety required to start thinking about other, broader human needs. But there was a catch in that these structures were often rigid, and so individuals had to effectively give up certain freedoms (for the sake of social norms, laws and customs) if they wanted to experience the benefits. This was the cost of surviving in a world that needed careful navigation if one was to thrive.

This began to change, Haidt argues, in the 18th century with the Enlightenment and the eventual Industrial Revolution. Due to major social, political and infrastructural development, more people were finding their needs met in ways that allowed them to detach from rigid group structures and pursue avenues of self-expression and realization. Over the centuries this became accessible to growing amounts of people who found themselves in a position Haidt calls WEIRD: Western, Educated, Industrialized, Rich and Democratic.

If we aim to develop healthy groups promoting democratic behaviour, then, we need to understand how groups work and where potential trouble spots can be found. 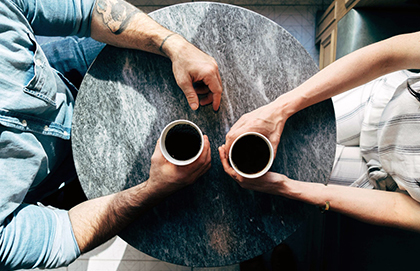 According to his research among cultures across the globe, the more WEIRD a society gets, the less likely its members are to adhere to group-based values such as tradition, authority, loyalty or purity in favour of individual priorities such as freedom and care. The data holds true not only when talking about different cultures, but also of sub-groups within one society (the difference, Haidt writes, between neighbourhoods in a single city can be striking).

The more safe and secure you feel, the less likely you are to participate in groups that place limits on your personal freedom. Consistently higher standards of living encourage citizens of WEIRD cultural groups to abandon older institutions and ways of grouping that are seen as less and less relevant. These can range from religious communities to civic groups to your grandmother's book club.

It all leads back to the problem noted in the my Convivium essay, namely that decreased participation in small-scale institutions (like those mentioned above) often means less spontaneous contact with people who possess other values, viewpoints and worldviews. This in turn can lead to less protection from divisive, politicized, democracy-eroding rhetoric. We're faced, as a result, with a dilemma: certain grouping seems to come at a high cost to individual freedom and self-development, but abandoning them altogether leaves us vulnerable to pundits as well as powerful agents of manipulation.

More, grouping allows for a number of other deep human needs to be met that are equally difficult to satisfy individually. Haidt, drawing on the thought of Emile Durkheim, one of the founders of modern sociology, describes this as a need for transcendence. 'Transcendence' here being connected to belonging, especially to something seen as bigger than oneself. Haidt goes on to list a number of ways that modern people try to meet this need, including watching the Olympics, participating in worship services or going to concerts and raves.

One might say that North American culture in particular is caught in the middle of the twin pulls of individual freedom and communal transcendence or safety. Some people lean more towards one or another, while others might find themselves flip-flopping between the two in an attempt to find a balance that works.

But there might not ever be a balance, or at least not a balance that's sustainable or fits everyone. People's needs, both as individuals and as a collective, change over time and there's no way yet to know when it's more beneficial to lean into one mode of living or another. No matter what the context is, there are going to be pros and cons to either and so it’s suggesting a few recommendations for a healthy, responsible, democracy-promoting grouping that provides security and belonging without destroying space for personal growth and self-realization.

First, it's important to sit in the dilemmas mentioned above. There's no right answer or sure-fire way to solve the tension between individual and group needs, and even the most helpful systems or philosophies can become oppressive when applied without regard to context. This is hard, especially for those of us who value closure or black-and-white values. But otherwise we can easily find ourselves oversimplifying complicated situations and choosing one set of needs to the negation of the other.

Second, if you have the ability to build community (whether it's in the context of extended family, housemates or the committed structure of intentional community), it's necessary to be able to communicate one's needs regularly, productively and humanely. Systems like Nonviolent Communication (NVC) provide a number of tools to help with just that. Taking proactive steps to make sure your needs are met help limit the potentially negative aspects of group participation and can lead to more sustainable collectives in the long run.

Third, be aware that forming groups or communities sometimes comes at a greater cost to some people than to others. This is particularly true with minority needs, which tend to be less visible (think of people living with disabilities, or of historically marginalized communities) in large groups. At their worst moments, and especially in times of threat or pressure, groups can become oppressive forces of discrimination and group-think.

Fourth, try to find ways to connect with people with a different lived experience than you. This can include being exposed to racial, cultural or ideological diversity, and it helps our groups to become more inclusive and prone to the habits of democracy.

Lastly (although this list is far from exhaustive), find support. Know what your limits are and ask forgiveness when you fall short of the ideal. Be ready with forgiveness yourself, if you can. Remember that giving and receiving form a strange, surprising cycle and we don't always know which one comes first. Be real with your experience, and be ready to accept the experiences of others.

We're all in this together, so to speak. So it's good to make the most of it while we're here.

In the first of a two-part series, Josh Nadeau contends for civility, dialogue and engagement as necessary ingredients for a healthy society.

Welcoming the End of "Government Compassion"

But the idea of structuring government involvement in foreign aid so that it coheres with foreign policy and trade objectives, while increasingly relying on non-governmental relief organizations to provide relief to those in need, is one that compels me ...