When one speaks of the omnipresent Millennial, a number of well-formed stereotypes come to mind. You have your vinyl-laden cultural connoisseurs, for example, or your selfie mavens (complete with seasonal latte) or experts in ‘90s nostalgia. While it’s ultimately impossible to reduce the most diverse generation North America has yet to see down to a few sharable memes, it’s undeniable how changes in technology and cultural values have made certain lifestyles not only possible, but popular.

Take digital nomads, for instance. For those unfamiliar with the phrase, it describes people who can do their jobs remotely and, instead of nestling into a home office, eventually go on to combine career building with long term travel. Think of computer programmers, graphic designers and freelance writers (among others) setting up shop in East Europe, Central America or South Asia.

Full disclosure: I’ve happily been one of these types since 2012, and when I tell someone about what I do there’s usually a very concrete mix of emotional responses: incredulity and scepticism at first, often followed by a kind of longing. Because, well, it really does sound like a dream: images are conjured of flexible schedules, fulfilling life experiences and, yes, working from the beach. And the growing amount of services and startups dedicated to promoting the life of a digital nomad certainly do like to maintain this image.

But while the idea of “working from paradise” has opened a new landscape of life-changing possibilities, there’s a corresponding anxiety about what it means to truly be unrooted.

Questions are asked: Is there something lost by not building into a particular neighbourhood or city? Do we lose perspective when, instead of being surrounded by the diversity that fixed communities provide, a nomad socializes mostly with other nomads? Will it be a way of bringing us together, or another excuse to throw up walls?

While all this seems very new, the question itself is actually as old as anything: will our increasing personal freedoms truly liberate us, or will they blind us to the solidarity we’re called to have with each other as a human family? This slippery task, defining our freedoms and the responsibilities that come with them, underlies perhaps every controversial question we’ve had to deal with recently as a culture. 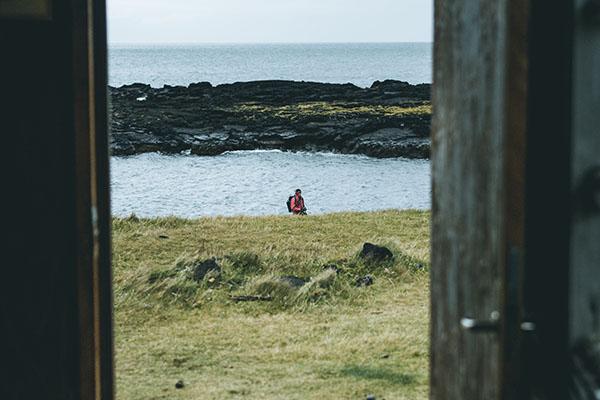 But rather than having this paralyze us, or compel us to treat new, unfamiliar lifestyles with suspicion, we can strive to find ways these new possibilities open doors within us for social and spiritual growth. And when we speak about the deeper potential suggested by the roving lifestyles of digital nomads, there’s an ancient tradition that effectively speaks to its core: pilgrimage.

Most of us would perceive the spiritual life as a kind of journey, and going on a geographical pilgrimage is a practical way of expressing a deeply felt reality.

When we hear the word ‘pilgrimage’ we often turn to images such as those in Geoffrey Chaucer’s The Canterbury Tales, or think of established routes like the Camino de Santiago or the Hajj. In the very physicality of the thing there’s something, well, sacramental about it. In the Christian sense of the word, a sacrament is an external, physical expression of a spiritual reality, a way for our bodies to take part in what the soul is believed to experience. Most of us would perceive the spiritual life as a kind of journey, and going on a geographical pilgrimage is a practical way of expressing a deeply felt reality.

This can literally mean physical travel to spiritually significant places, but it can also be a general posture in our lives. It’s been said, and famously, how “the world’s thy ship and not thy home.” For many of us, awareness of the spiritual dimension of our lives is a call to the awareness that our lives themselves are pilgrimages. Switching up where you live, as many digital nomads do, is a way of encountering that reality in a very concrete sense. You can’t take much with you. You’re constantly in search of connection. You feel, viscerally, how dependent you are on the generosity of others and end up re-evaluating your connection to what’s here and now. Like the pilgrim, you’re displaced and are called to be taught in precisely that displacement. Ultimately, the experience of physical and social rootlessness can prompt one to start digging deep into wells that existed long before we were born, and will continue long after we take that final bow.

There’s a fantastic word used in anthropological circles describing the space we often encounter on pilgrimage: liminal. A liminal space can be said to be like a threshold, a transitional space, something outside of regular, day-to-day life. Within it, you might feel more open to new or unusual experiences. It’s the space people occupy when they tell their life story to strangers on a train, or when they’re on a stroll and, suddenly, they stumble on a transcendental moment and, in a semi-violent flash, see everything with fresh eyes. Pilgrimage, when we let it, opens us up in precisely this way – we become tilled soil for new, unexpected seeds. Wonder, that reality that sometimes seems, well, rather far from our everyday routines, cracks itself open right in front of us.

Travel, if we allow it to, can root these fertile, liminal spaces inside us. Whether you’re on a weekend getaway, heading on a short pilgrimage, taking your kids for a volunteer month abroad, or are living the life of a digital nomad, you can angle yourself to be reacquainted with the beauty of the world, the terror of the unknown, the humility of being small and outside your comfort zone. Which sounds a lot, when you think about it, like the classical sense of fear of God. That and, by entering deeper into another culture, we’re invited to the see the world from another angle, which lays foundations for new growths of empathy, solidarity and compassion.

I don’t work on a beach. I’m more often found in formerly Communist neighbourhoods that mostly seem in sharp need of renovation. My life abroad has made me approach the phrase “stranger and sojourner” in distinct, meaningful new senses. When the conflict in East Ukraine lurched out of control, I couldn’t help caring because it was happening to people I knew. Caring leads to taking responsibility, which itself leads to active citizenship. These days I divide my time between Russia, Bosnia and Georgia and am constantly inspired by the way people around me, in the absence of the infrastructure and support I had in my Canadian life, take ownership of their cities and spaces and work towards a more humane way of being people, here, together.

Thinking of Canada, I can’t help thinking of how far we’ve come and how much is left to do. The diverse responses evoked by the 150th birthday celebration speak to just that. I want to be part of that process, and I would never have reached that desire without distance and exposure. That said, I don’t know if I’ll be back in the motherland anytime soon, or what my life would look like if I were.

But if I’ve been taught anything by my time abroad, it’s that the motherland can be found, well, everywhere. It’s just a matter of knowing where, and to whom, our roots really lead back to.

For an alternate look at our relationship to place, check out Sean Hedley's piece, God Beyond Instagram. Add your voice to the conversation!

Father Tim McCauley points readers towards the necessity of recovering an approach towards politics which prizes perspective over personality.