It’s sometimes hard to distinguish the show from the sideshow. Both came to Queen’s University last Monday, in the person of Jordan Peterson and those who profess outrage at the professor.

The show was the inaugural installment in a new law school lecture series on liberty. The sideshow was an unruly and violent protest, complete with banging on doors and windows, the chanting of obscenities and the disruption of the lecture itself.

All of the coverage I saw – save for my column in the National Post – treated exclusively the sideshow as the main event. The show – meaning what Peterson said and why so many people are eager to hear it – got little attention at all.

Much attention was given to the woman who broke a window and was subsequently found by the police to be carrying a garrotte. Did she come to strangle Peterson? I don’t know. A 38-year-old who is not a student at Queen’s, I expect that she is, more or less, a professional disrupter. Antagonizing professors and students on a leafy campus is a pretty safe venture, but if she takes her brand of protest to a mining or logging site, she might not be so confident about the reaction she would encounter. So a few intimidating weapons are likely standard items in her kit.

As Robert De Niro almost said in The Untouchables, “You can get more with a kind word and a garrotte than with a kind word alone.” To be fair, De Niro was playing the Mafia don Al Capone, not an activist looking to build a more progressive society. It gives rather an ominous shading to worries about those who would throttle free speech. 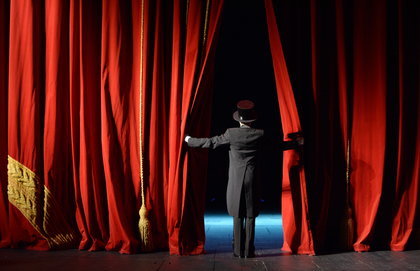 Empathy
Pig Blood and Glowing Sand
The One True GOAT

Was it ever thus? Peterson’s new book – 12 Rules for Life: An Antidote to Chaos – has a foreword by Norman Doidge, a friend of Peterson’s and a fellow clinician. And Doidge opens with the Biblical story of the Ten Commandments, suitable enough for a book about rules. God had 10, Peterson has 12. Doidge writes about God and Moses, Aaron and idolatry:

The “rules” about civil discourse and academic exchange are what permit a free and fruitful exchange of ideas. The freedom to scream and shout and curse and crash is a certain kind of freedom, but it is a freedom without purpose.

Why should we be judged according to another’s rule? And judged we are. After all, God didn’t give Moses “The Ten Suggestions,” he gave Commandments; and if I’m a free agent, my first reaction to commands might just be that nobody, not even God, tells me what to do, even if it’s good for me. But the story of the golden calf reminds us that without rules we quickly become slaves to our passions – and there’s nothing freeing about that.

And the story suggests something more: unchaperoned, and left to our untutored judgement , we are quick to aim low and worship qualities that are beneath us – in this case, an artificial animal that brings out our own animal instincts in a completely unregulated way. The old Hebrew story makes it clear how the ancients felt about our prospects for civilized behaviour in the absence of rules that seek to elevate our gaze and raise our standards.

I quote that passage from the foreword for two reasons. One, I just got the book and haven’t yet read any farther. Two, I was actually reading the foreword when waiting for the lecture to begin, and hearing the protestors outside. When they began disrupting the lecture by pounding on the doors and windows in defiance of the rules, and I suppose the system that makes the rules, it seemed to me that Doidge’s description was bang on. The mob was in fact enslaved to its passions, aiming low and achieving standards that are beneath us on a university campus – or anywhere else for that matter, outside of the professional wrestling ring or the set of a reality TV show.

The Christian tradition about “rules” is that rules are what give direction to authentic freedom. The prohibition on killing and violence and mayhem leaves us free to move about without fear of not returning home safe. The “rules” about civil discourse and academic exchange are what permit a free and fruitful exchange of ideas. The freedom to scream and shout and curse and crash is a certain kind of freedom, but it is a freedom without purpose.

Raising his voice to make himself heard over the din, Peterson observed that the tactics of those outside were suitable – perhaps even effective – for destroying things. And, he conceded with generous fair-mindedness, if you think that our entire society is built on oppressive structures, then it is entirely logical to want to tear it all down. But then what it is to be built? Screaming and shouting and cursing and crashing are not genuinely creative. Creativity requires the discipline of the rules, as any football coach or composer or chef will tell you.

We will return to Jordan Peterson in the weeks ahead, as more attention ought to be paid to the arguments he is making, how he makes them, and why they resonate so widely.

One last item from his talk at Queen’s. In response to a student question about how to prepare now for possible conflicts ahead, Peterson inveighed against, when writing papers, writing what the professor wants to hear. (Or what the student thinks the professor wants to hear.) The student who gets good at “expedient speech” for academic gain, Peterson warns, is training his character so that in future he will be good at offering “expedient speech” for monetary gain, or professional gain, or political gain.

It is not a good deal, the Bible warns us, to sell one’s heritage for a mess of pottage, or even to gain the whole world as the cost of one’s soul. It is advice that Aaron ignored as he set about fashioning his golden idol, and that Moses, in short order, would remind him of.

The One True GOAT

There are many great pretenders to the title of greatest athlete of all time. But Father Raymond de Souza acknowledges New England Patriots’ quarterback Tom Brady has a commanding claim to being better than all the rest.