One hundred and fifty years ago, while on a tour of mission outposts in his vast Northwest Canadian diocese, Alexandre-Antonin Taché, the Lord Bishop of St. Boniface, picked a site in the Qu'Appelle Valley for a mission to minister to the Métis and Aboriginal followers in what was then known as the Assiniboia territory.

There was nothing arbitrary about Taché's decision. He was the first of the Missionary Oblates of Mary Immaculate to go west in 1845, one of the first Roman Catholic missionaries in what was called the "land of white silence." He was especially drawn to the Qu'Appelle Valley because one of his great uncles, Louis-Joseph Gaultier de La Vérendrye, was thought to have been one of the first Europeans to explore the area in the 1740s. Taché was struck by the beauty of the place from the moment he saw it. On his initial visit, he wrote about the streams of light that flooded its chain of four lakes and mentioned its "sweet freshness of the purest air. Over our heads, a cloudless sky whose limpidity challenged that of Italy."

Taché was only 27 when he was made bishop. He had befriended Pierre Hourie, the Métis fur trader from Fort Garry who, the previous year, had opened a Hudson Bay trading post at nearby Fort Qu'Appelle. Two missionaries with the Church of England, Charles Pratt and James Settee, both Métis, had been making converts in the area. Pratt was a charismatic medicine man and preacher whose reputation as a man of God was enhanced when he denounced a juvenile band of mixed bloods known as the Young Dogs.

The story may be apocryphal, but it suggests that Pratt predicted the Young Dogs would perish like the sinners of Sodom and Gomorrah if they did not abandon their sexually immoral behaviour. Shortly after his warning, the Young Dogs' camp was hit by lightning. There was even a salt lake nearby. After that, Pratt had little trouble with his parishioners.

So, when Taché celebrated Mass at the new town of Fort Qu'Appelle on August 26, 1864, three local Métis—Pierre Desnomie, Louis Racette and Michel Lemire—petitioned him for a Roman Catholic priest to curb the rising tide of Anglicans that they complained were sweeping through the valley.

The following year, after travelling 1,200 kilometres to Île-à-la-Crosse on the Churchill River to meet with Florent Vandenberghe, the secretary general of the Oblates in America, Taché returned to the valley on his way back to the Red River settlement at St. Boniface. Vandenberghe, who was in the west on a canonical visit, had been expected to accompany Taché back to Fort Garry but was unexpectedly detained.

Taché selected a spot for the mission on a spit of land known as Denomie Point on the shore of what was then known as See as kum ka poo, or Pebble Lake, and an outdoor Mass on a portable altar was celebrated on the site on October 17, 1865. It was the feast day of Saint Florent, a 6th century French bishop and, coincidentally, Vandenberghe's namesake. So Taché named the mission in their honour.

A missionary priest from Quebec by the name of Noël-Joseph Ritchot built a rough-hewn two-storey log building with a chapel downstairs and living quarters upstairs under a thatched roof. It was the first Roman Catholic mission in the district of Assiniboia. It opened the following summer.

St. Florent was registered as an ecclesiastical district of St. Boniface in 1867, the year of Confederation, making it the first Roman Catholic parish in what today is southern Saskatchewan. Westerners, especially the Roman Catholic clergy, were skeptical about becoming part of the new country. They were concerned that by joining Confederation, "French Catholics in the North West Territories will be sacrificed and the new system will lead to our ruin." The clergy had little influence with the new government in Ottawa, which repeatedly ignored their warnings of impending political unrest in the territory. 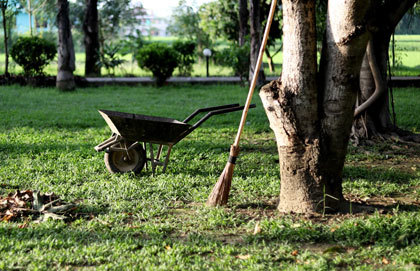 The Garden of Herb’s Dream
The Complex Web of Indigenous Diversity
Al Rashid: Mosque and Refuge

The first Mission burned in 1868, and a parishioner, Antoine Desjarlais, died in the fire trying to retrieve vessels and vestments.

Following the Red River Rebellion at Fort Garry in 1870, many nomadic Manitoba Métis looking for new homes and for buffalo to hunt moved west into the Qu'Appelle Valley. As their numbers grew, a church facing the lake replaced the crude log chapel that had burned. Jules DeCorby, a 27-year-old Oblate from Chandolas, France, became the first permanent resident priest.

DeCorby was a steady presence in the Prairies. He learned to speak Cree, Salteaux and Sioux. He was widely respected and known affectionately as starorksa, or "the loving one." In the decade that followed, the unadorned white clapboard chapel quickly became the headquarters for all of the Oblate missionaries in southern Saskatchewan. Everyone referred to it and to the lake simply as the Mission.

When Father DeCorby left, Joseph Hugonnard, a priest from France, was assigned to minister to the congregation, which now numbered 500. Father Hugonnard had the first Cross erected on a hill above the thriving mission in 1871. (It was replaced with a bigger one in 1894.) In 1877, he defused a potentially dangerous situation when Lakota Chief Thathánka Íyotake, more commonly known as Sitting Bull, and his starving band of 4,000 Sioux warriors who had fled to Canada following the Battle of the Little Big Horn, threatened to raid the Mission for food. The warriors were so desperate for food, they were prepared to trade their rifles and blankets, but supplies were limited and Hugonnard managed to talk them into wintering at Wood Mountain, where conditions were marginally better.

By then, the North West Mounted Police had opened their barracks at Fort Qu'Appelle, so it was not unreasonable to expect that the town would become the capital of the district and St. Florent would become the Cathedral See. Hugonnard opened an industrial school for Aboriginals and Métis in 1884 and the Grey Nuns were recruited to help run it. Its curriculum was sensitive to the Plains Cree who first enrolled there. Hugonnard's school, for all of its eventual shortcomings, had a better record in promoting cultural continuity and family links than the federal institution that followed. A travel writer from New York with Frank Leslie's Popular Monthly described the priest as "tall, dark, lithe, with close-cropped hair, keen black eyes, a bright smile and a decided, ringing voice."

During the second Riel insurrection in 1885, Father Hugonnard used his influence to save lives and avoid a full-scale civil war. He persuaded Chief Ahchuchwahauhhatohapit— Star Blanket—not to join the rebellion and threw the weight of his Church on the side of the Métis. He also pleaded for clemency when their leader, Louis Riel, was sentenced to death for treason.

In 1886, Father Louis Lebret, a French Oblate from Britanny, came to assist Hugonnard and opened the first post office in the rectory. Lebret wanted the Mission's postal address to be Sacré Coeur de Jesus. But federal bureaucrats in Ottawa in charge of organizing the postal service ignored the request and named the postal station Lebret, after the postmaster. Lebret it remains—even though Father Lebret spent less than six months in the community.

The Sisters of Our Lady of the Mission opened a convent school in Lebret in 1899 and ran it for the next 75 years.

Saskatchewan became a province in 1905. The Archdiocese of Regina was created in November 1911 and Lebret became one of its parishes. Following the First World War, a chapel dedicated to Saint Florent was built on top of a hill facing the church. It was dedicated by Bishop Mathieu as a "monument of thanksgiving" to those who had died in the war. Father Hugonnard died in 1917; he is buried in the cemetery to the east of the church.

The cornerstone of the current fieldstone church, designed by Jean-Theodore de Byl, was placed in 1925. The church incorporates elements of modified Gothic revival and Romanesque architecture. With its 37 metre (122 foot) tall steeple, it cost $38,000 to build, or more than $500,000 in constant dollars. It was dedicated by Bishop Mathieu on July 1, 1926. That same year, an Oblate seminary opened on the other side of the lake.

Two years later, in a wave of anti-Catholic sentiment, the pilgrimage chapel on top of the hill was burned, purportedly by Ku Klux Klansmen; and in 1929, another, smaller chapel replaced the original and the landmark 14 Stations of the Cross that led to the summit were installed. In 1930, the largest cross atop the hill was illuminated.

The parish lost a substantial number of its supporters in the 1940s, when Our Lady of Sorrows Church was built in neighbouring Fort Qu'Appelle to serve the growing number of Catholics who no longer wanted to trek to Mass at Lebret each Sunday. The Oblate seminary closed in 1964 and the building was destroyed by fire in 1982. Oblates continued to minister at Sacred Heart until 1986.

The church was declared a municipal heritage property in 1985.

Peter Stockland visits Al Rashid in Edmonton, Canada's first Mosque, to talk about their efforts to rebuild community and offer support to evacuees of Fort McMurray.