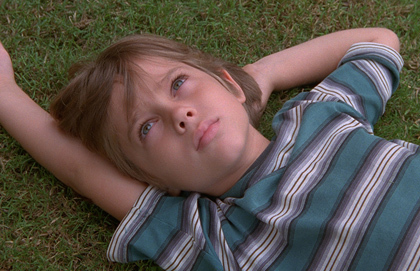 The Haunting Presence of Time in Linklater’s Boyhood August 26, 2014  |  By Doug Sikkema
Print

There’s a sadness that runs through Richard Linklater’s recent film Boyhood, one that’s hard to put your finger on. Shot over twelve years—yes, twelve years!—the film traces the life of Mason Evans (Ellar Coletrane) from the age of 6 to 18, from boyhood to its inevitable end. And I think that’s part of the reason for the sadness: boyhood eventually ends, and it ends all too soon.

Running for only a few hours, we just have to blink and Mason has almost imperceptibly shifted in appearance and grown older. The film is like watching a life unfold under a very slowly blinkering strobe light, each flash brilliantly illuminating a moment before it vanishes. I want to say that they are pivotal moments, but that would be a stretch. Something is always happening to Mason, but it’s hard (just like in real life) to really know how the moments are being shaped or shaping the characters who move through them.

Given the temporal scope of the film, it’s no real surprise that time is one of the dominant themes of the movie and in one of the last scenes, just as Mason is about to go off to college, his mother makes the most significant (in my humble opinion) remark of the film. Looking back at the brevity of her boy’s life under her care, she realizes that it’s gone all too quickly and she tearfully demands: “There’s got to be more!”

Really, who hasn’t looked back on their childhood and realized that those seemingly endless days of sibling rivalry, explorations of the unknown neighborhood, first loves and first fistfights do indeed end. And the poignancy of those moments in their delight and pain has been dulled as time continues its unrelenting progression. 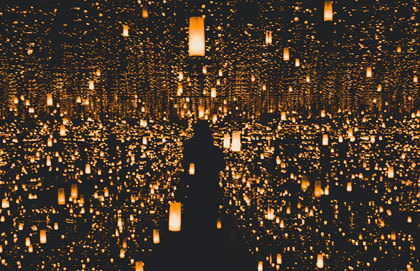 But the movie avoids—quite self-consciously, in fact—the clichéd call to “seize the moment.” In the film’s final scene, Mason reflects that in life, it’s more likely that the moments seize us. Although not addressed to her, his words are a response to his mother’s earlier demand. She wanted more, and maybe Mason’s got his finger on the pulse of just what that might look like. It’s not a call to go out and control time and make moments burning with intensity; rather, it’s a call to open oneself up to the possibilities that every moment presents us with.

Mason’s words are perhaps one indication of how the secular age continues to be haunted by the presence of a transcendent reality that most have discarded from their imagination. As such, the film ties in nicely to the theme which will inform the September issue of Comment.

Just reading what St. Augustine had to say about time might help clarify what I’m talking about: “What then is time?” Augustine asks in the Confessions, “If no one asks me, I know: if I wish to explain it to one that asks, I know not.” In the centuries since, I’d hazard that time is perhaps no less enigmatic for Linklater than it was for the Bishop of Hippo, but most today probably don’t ask the same type of questions that Augustine did. He lived in a different age. Augustine assumed the reality of a transcendent eternal order that interpenetrated the immanent, time-bound world in its state of perpetual flux, that world where boys and girls become men and women and then fade away even from memory.

This transcendent reality also gave form and meaning to life in the pre-modern understanding, but in our secular age, most would likely have little issue with cutting the entire “problem” of such a dubious eternal reality from the picture: time proceeds chronologically with a rather mechanical march onwards. Such a view does not really make time more understandable, but it does reduce the frame within which we view it. It also relocates the source of meaning from an external reality outside the self to the subjective reality within it.

Charles Taylor, who traces the movement from Augustine’s age to ours in several hundred pages, argues that a fundamental shift in perception and behaviour has birthed “a race of humans [who have] managed to experience their world entirely as immanent.” This almost echoes Nietzsche’s idea of a coming race of stunted men, but as Peter Gordon argues, “they inhabit the unjoyful world in which God may be dead and meaning comes only from us.”

In another of Taylor’s phrases, the world has become “disenchanted.” Yet the eternity of the present moment, even if it can’t fully be understood, can’t be escaped. And whether we’ll acknowledge it or not, we’re haunted by those moments that, as Mason realizes, seize us. They arrest us and, perhaps, enchant us.

Of course, not all in the secular age keep their blinders on to the faint traces of the transcendent within the immanent world, and as Jamie Smith puts it in his editorial: “If the believer is haunted by an echoing emptiness, the unbeliever can be equally haunted by a hounding transcendence.” And what is Mason’s mother’s demand for “more” than the haunting cry of one who desires more than a world of time that can only be lost.