I am three weeks into a new daily routine where I have been journaling the things for which I am grateful. Coinciding not coincidentally with Thanksgiving, my intent is to instill this new habit until the end of October with the hopes that it will stick. It is good to be reminded of these tangible and immediate things for which I am grateful. But all of this was turned on its head after I watched the film Gravity. As I hurdled through space with lead character Dr. Ryan Stone (Sandra Bullock), my whole concept of gratitude expanded.

The film begins with a crew of astronauts working outside their space craft. Shortly thereafter, catastrophe strikes when Mission Control in Houston warns them that they must abort their mission due to flying pieces of debris from damaged satellites. Sadly, they are not able to return to safety and Ryan Stone and mission commander Matt Kowalski (George Clooney) are the sole survivors.  At one point, Stone is completely detached from the shuttle and tumbling helplessly through space. My eyes were tethered to the screen as Stone and Kowalski work together to survive, persevering through seemingly impossible obstacles. 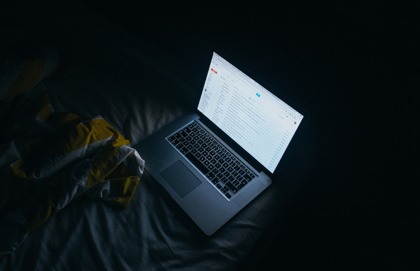 When death seems imminent, Stone tearfully voices her fear of dying; that there's no one to pray for her soul, and that no one ever taught her how to pray. Just when she has reconciled to her death, she turns off her oxygen so as to commit suicide. At that moment, Kowalski appears in the form of a hallucination. He tells her that she must "plant both feet on the ground and start living [her] life." Inspired by this message, she finds the strength to rescue herself.

The film itself is a cinematic wonder. The viewer cannot help but marvel at the awesomeness of creation. It is as though the viewer is floating in the cosmic womb, the point of infinite potential. Our own insignificance and powerlessness is terrifyingly clear. The darkness and the absence of sensory perception underlines the astronaut's isolation and yet there is this niggling doubt, this sense that all is in its place and unfolding as meant to be.

At many points I was on the edge of my seat, watching as Stone tries to complete the smallest of tasks that meant the difference between her life and death. For the viewer, the small things we take for granted like the ability to perform a mere act of turning a lever or operating a screwdriver are excruciatingly difficult. One comes away with a sense of gratitude for the ease with which we're able to complete our life's tasks. Dr. Stone came face to face with her own sense of gratitude, not just for life, but for being alive. The theme of rebirth is clear as we watch her fight to live with growing passion and steadfastness. She is literally and figuratively naked, with almost no hope or will to live, but she realizes her inherent and divine worth—the knowledge that she is sufficient unto herself. In her newly found state she is clothed in the purposefulness that only gratitude creates.

In comparison, my journal items of gratitude seem small. I came away from the film with an absolute truth: I don't need to be tethered to my tangible physical needs and wants. Despite my enormous gratitude for this state of physical well-being, I must tether myself to the intangible; to the knowledge that our purpose—our gravity—comes from a limitless love that unites us all.

One comes away with a sense of gratitude for the ease with which we're able to complete our life's tasks.