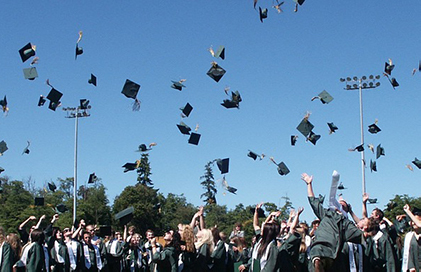 It’s graduation season, and thus the season of graduation speeches. Some worthy is invited to address the graduates – “graduands”, if the address is given before the degrees are awarded, for those who remember their Latin endings – and is supposed to lend some honour to the proceedings.

That’s not always the case, but in 1993 at Queen’s University my alma mater honoured Amartya Sen, the future Nobel laureate in economics, and as part of the academic procession it was a great honour to meet him and listen to him impart some wisdom about the goodness of work, and not just as an advance payment on leisure. Years later he would figure prominently on the reading list for my course in philosophy and economics.

Some graduation speakers look back, and others look forward – as in “commencement.” Almost all are well-intentioned, well-received and well-forgotten.

Yet I remember one address clearly, delivered 30 years ago this week, at the graduation exercises of Bishop Grandin High School in Calgary. In June 1989, I graduated from Bishop Carroll High School, but a number of my friends were over at Bishop Grandin High School, so I attended their graduation too. The speaker was Jim Dinning, then the education minister in the Alberta government, who went on to various other senior roles. He served as chancellor of the University of Calgary from 2010 to 2014, so he must have enjoyed graduation exercises.

In 1989, Dinning addressed those graduates – or graduands, I don’t remember – about both looking forward and looking back. Specifically, he spoke to them about a quondam novelty which had become in the 1980s a widespread consumer item, the digital watch. Dinning thought that this new way to telling time had much to tell us about how we think about time.

The digital watch provides precision. We know exactly what time it is, down to the second. It provides a constant update and measurement of where we are. It can act as a stopwatch or timer, counting up or counting down, and has a few little bonus features like alarms. It is precise, it is efficient, it is productive. And this was decades before “smart” watches that monitor pulse rates and bathroom visits, book theatre tickets and do videoconferencing, all while synched to your thermostat and garage door opener at home.

What’s not to like? Dinning pointed out that the alternative “analog” watch provided less information and was less precise, but conveyed a certain sense of context, even wisdom. The key is the name: “analog.” It provides an analogy to something else; it is not an endpoint in itself. The moving of the hands of the clock around the clock face are analogous to the “movement” of the sun across the sky as the earth rotates through day and night onward to day and night. The Psalms speak of “always” as “from the rising of the sun to its setting” for that is always going on, the sun rising and setting, even as the hands of well-crafted watch move around, and around, and around.

“Analogy” – though Dinning did not get into this – is a key concept in the history of thinking about God. When we say God is good we don’t mean it in the same way that we say a lawnmower or toaster or watch is good. The sense is not exactly the same. Yet we also do mean something when we say both are good; God is not entirely beyond our language’s capacity to describe him. Christian theology therefore employs “analogy,” meaning that when we say that God is good we are saying something true. Not exactly the same as saying that this or that created thing is good, but there is a true analogy.

Had Dinning been addressing graduates in Christian philosophy, he would have said that “analogy” is how we get at the most fundamental “nature” of God. We are in the category of being, that is, we exist and we have our nature. God is not like that; His nature is simply to exist. Our being is analogous to His, but not the same. We get at who God is through analogy.

But Dinning was not speaking to aspiring philosophers but Grade 12 students, and so he made more modest claims. The analog watch does not tell us only of the present, precise moment, but situates us within the passage of time. A digital watch tells me that is 11:53 a.m., the analog that it is almost midday.

I see the passage of time – it’s a quarter past the hour, because the minute hand is literally – analogously – a quarter into its travel around the watch face. The analog points me toward the future and the past; I am not trapped in the tyranny of the present moment. I came from somewhere and am headed somewhere. The digital watch describes in precise detail the current data; the analog watch tells a story.

Is one better than the other? To put it into graduation address terms, what is more important, facts or truth, knowledge or wisdom? Both are necessary in fact. But it is clear what Dinning thought more important then. I still remember it 30 years later, and I still agree.

In 1989, we did not yet call our era a “digital” age. It was just the digital watch then. Graduation addresses often evaporate even as they are being delivered; Dinning’s address at Bishop Grandin has stood the test of time. And in a digital age, we need all the more to tell it analogously.