“Death is inevitable. A bad death is not,” blares the headline of the April 29th edition of The Economist. The feature repeats the arguments why more palliative care, a “neglected branch of medicine,” is needed and why “honest and open conversations about dying should be as much a part of modern medicine as prescribing drugs or fixing broken bones.”

The coming first anniversary of the legalization of doctor-assisted suicide, and the debate surrounding it, easily muddy the discussion-of-death waters. The mistaken premise of this debate is the affirmation that the choice to die is what makes for a good death. Autonomy does not transform something that is inherently bad into something good.

While fully appreciative and respectful of the medical profession’s important contribution, the debate also betrays an overly medicalized understanding of life. We may need to breathe in order to live but few of us would say that breathing is living. In a biological sense, yes. In a holistic sense, we only get started when we breathe.

Preparing for death is not preparing for the end of breathing; it needs to focus on the completion of living. Still, in spite of medicine’s progress, 100 per cent of us die. We all at one point or another, breathe our last. True, for most, death will typically come three decades later than it would have in 1900, but infinitely forestalling death remains the domain of science fiction.

Approximately 10 per cent of us will die suddenly, without warning and without a chance to say good-bye to those who are near to us. For the remaining 90 per cent or so, at some point we will receive the news that while the precise time can’t be pinpointed, it will likely be a matter of years/weeks/days when we can expect our passing. Sure, we may be able to choose from among a medical intervention or three, which may (or may not) extend that timeline marginally, but the inevitable is near.

I wonder if the question surrounding a good death involves less medicine and more of how we prioritize the remaining time. For most of us, these priorities are likely to fall into some combination of five categories. By happy coincidence, they are congruent with Dr. Ira Byock’s The Four Things That Matter Most: A Book About Living, though I had not read his 2004 book when I came up with my own list. 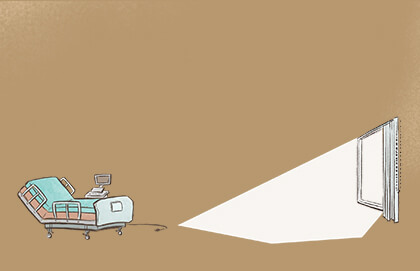 MAiD and Modern Medicine
Shadows and Light on Palliative Care
What does post-Carter Canada look like?

There is someone to whom we need to say, “I love you.” Whatever our status or wealth, death is an equalizer. The value of intimacy and our closest relationships are highlighted at these times and the need to say, with words and deeds, “I love you” to those whom we really love becomes the most important item on our agenda.

Preparing for death is not preparing for the end of breathing; it needs to focus on the completion of living.

There is also, for most of us, someone to whom we need to say, “I’m sorry.” Living with broken relationships is a plight too common but there is nothing like the urgency of a deadline to resolve things that need to be resolved. The priority list suddenly changes.

“Thank you” is another priority for those who have a finite number of words and visits to share. There are important people in each of our lives and the reality of the final deadline focuses the mind on who helped us become whom we are and contributed to our successes.

Depending on our station in life, some may feel the impact of our death, not just in terms of our absence, but also from the loss of our care. “You will be ok and taken care of” are words that need to shared with those who depend on us, with the appropriate arrangements put into place to back up those words after we are gone.

“I too will be ok” is the final word that our loved ones need to hear from us. The content and character of this statement will differ significantly depending on your understanding of life and death, as well as what happens after we die. Whatever debates we may have about such matters while we are alive, these matters take on an urgency when the inevitably of death is near.

So what does any of this have to do with palliative care and the end of life? Imagine how much less stressful, and less terrifying, anyone’s last days would be if facilitating the five priorities above were part of the care received. Pain management, support for caregivers, and advanced care planning all play an important part in this equation. Tying up the loose ends in life must be part of the equation too. Done well, preparing for death will result in a better life, right to our last breath.

Ray Pennings is the executive vice-president of Cardus. For more of Ray's thoughts on palliative care, check out his latest video with ARPA.

In Canada, access to palliative care varies from excellent to extremely poor based on where one lives yet euthanasia is now expected to be available anywhere at the first request The Canadian Medical Association Journal (CMAJ) reported in 2010 that 32% of all assisted deaths (including euthanasia an...