With the second season of the Mandalorian wrapped, many both young and old reported sniffly noses and leaky tear ducts on Star Wars fan boards and on social media.

You can count me as one of them. I think it’s safe to assume for the overwhelming majority, these weren’t tears of sadness, but of joy.

Obviously, the dramatic return of the Jedi, Luke Skywalker, with his loyal friend R2-D2 drove much of it. To see an unvarnished hero, pure in his faith and mission, rescue an orphaned child and his adopted father is just the delicate and heartwarming touch we all needed to end 2020.

But I think there’s more to it than that. The episode is appropriately titled “The Rescue” and reaches deeper than just extraordinary acts of heroism. It goes to the pure centre of Star Wars mythology and the dramatic importance of love from a father.

Anyone familiar with George Lucas and the creation of Star Wars knows how heavily he relied on the hero’s journey popularized by Joseph Campbell.

The hero’s journey is a summary of an archetypal myth across cultures and time. It begins with a call-to-adventure, away from the comforts and familiarity of home, a denial of the call, guidance from a spiritual figure, entering into adventure, trial and tribulation, and ultimately metamorphosis and growth, becoming the person the hero was always meant to be.

In the Judeo-Christian tradition, we can look at Abraham, the father of the great Western faiths, and his call-to-adventure from his God the Lord. He enters adventures of battle, and encounters with great kings, facing the ultimate trial in the call to sacrifice his son and his son’s eventual salvation. He completes his journey at peace as the symbol of a great promise.

It’s not a story that ends in hatred, but in love. A pure love between a father and his child. A love that says “no” when given the opportunity to hold onto power and political control over a full galaxy, but “yes” to giving one’s life to save the other.

It’s the story of Bilbo and Frodo in the Hobbit and the Lord of the Rings as they leave and return to the Shire with great treasures and stories of adventure. It’s Peter, Susan, Lucy, and Edmund as they are called into Narnia through the wardrobe to become kings and queens. And it is, of course, the story of Luke Skywalker. 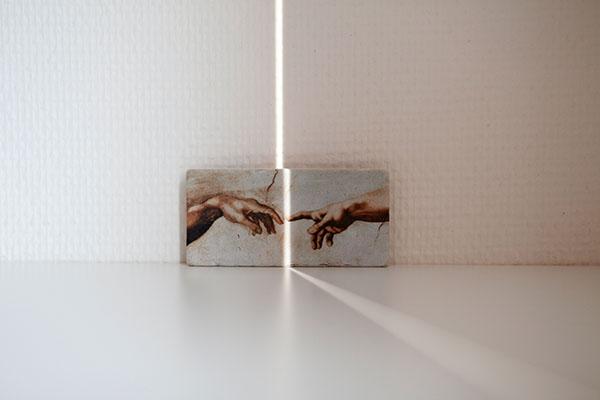 The Biblical Cast of Ted Lasso
Inspired By Example
From Sea to Sea: Party, Power, Patrimony

For Lucas, one of the most critical pieces of that journey is atonement through the father, either as a symbol, tradition or person. In Campbell’s work, the father-figure is usually described using terms more fit for a tyrant, a competitive plank that the hero must wrestle with and ultimately overcome.

In Star Wars, this is Luke rescuing his father, the monster Darth Vader.

It’s not a story that ends in hatred, but in love. A pure love between a father and his child. A love that says “no” when given the opportunity to hold onto power and political control over a full galaxy, but “yes” to giving one’s life to save the other.

And it’s this pure, poison-free love that shines so brightly through the story of the helmeted Mandalorian refugee.

An orphan himself, the Mandalorian knows the pain of a broken childhood. When we first meet him in the series, he’s a cold and ruthless bounty hunter, with his only bonds tied to “The Watch” - a religious sect of Mandalore, described as a cult by Mandalorian royalty earlier in the series.

Over two seasons, he becomes totally transformed. He saves Baby Yoda, now known as Grogu. He is set on a journey to return the child to his “kin” the Jedi as an act of obedience to the Mandalorian Way. It quickly becomes obvious that his devotion to the child is not based on obedience to an ancient code, but to the purity of love he has for Grogu.

After being captured by the evil remnants of the empire, the Mandalorian risks everything to save his adopted son.

But it’s not his extraordinary acts of sacrifice that hit home. It is when Luke Skywalker, the Jedi the Mandalorian set out to find to deliver Grogu, arrives. For the Mandalorian, this is his goodbye to his son, setting his son on his own hero’s journey.

He broke his own oaths and creeds to lift his helmet so he could look at his son with his own eyes, just as Vader did with Luke at the end of the Return of the Jedi.

For me, it was the touch of Grogu on the Mandalorian’s naked face and the hug on his leg that really caused the waterworks.

My children are all five and under and so far I’ve learned the greatest challenge of being a parent is the art of letting my kids go; making it so they don’t need me anymore. When my children entered the world, I was so comforted by the time they rested on my chest, asleep, and at peace. I was their protector. But they quickly move on from wanting to be held and begin to find out just how much of the world they still have to discover and be made known on their own.

A reminder that we are loved to the point our father would give up his life for us, and that we all have the potential to show that love to our family and fellow man, is a message worth shedding some happy tears over.

My children have their own calling and the people they are meant to be. I can’t hold them away from pain and tears, I can only make sure they’re ready for it and that I have their back. This was made most abundantly clear to me this past summer when I watched, almost in slow motion, as my oldest son broke his collarbone in a bike accident.

Shattered, I held him knowing that I could not make the pain go away, but that he would have to go on his journey of pain and recovery by himself as we only provided him with what we could to minimize pain and discomfort, always ready for a hug if he needed one.

It’s the love the Father of the Christian faith showed more than 2,000 years ago as he brought his Son into the world so that he could save the world. It is that child who showed that through faith and showing complete love and compassion to others, not only do we find salvation, but bring heaven a little closer to earth.

And as so many have shed tears this past year of grief and pain, from lost loved ones, missed funerals and weddings, and months of isolation, a reminder that we are loved to the point our father would give up his life for us, and that we all have the potential to show that love to our family and fellow man, is a message worth shedding some happy tears over.

The Biblical Cast of Ted Lasso

Evan Menzies watches the season two finale of the Apple TV+ surprise hit and sees the shadows of Cain and Abel falling across the characters.