BEIRUT – Canada and the world, it’s undeniably a time to speak and a time to act. The situation is critical in north-eastern Syria and we have a moral obligation to speak up and to take action on behalf of persecuted religious minorities.

Humanitarian aid is urgently needed in north-eastern Syria, as desperate Christian refugees cross the border into Lebanon, adding to the burdens of an already economically depressed nation and stretching the resources of aid organizations to the limit.

The latest bombardment on north-east Syria by Turkish and Russian forces, allied with a newly resurgent ISIS contingent, has unleashed another genocidal assault against the beleaguered Christian minority. The last rag-tag remnants of the Assyrian/Chaldean/Syriac community—some of the world’s first people to embrace Christianity—are fleeing their ancient homelands in terror after continuous shelling pounded their homeland in the second week of October.

The latest exodus is not only splitting apart families as they use Lebanon as a  transit station on their way to more prosperous nations. It is also raising concerns that this is the final act in the unfolding tragedy of eliminating the Christian presence from the sacred spaces where it all began. A final solution, from the Islamic extremists’ perspective.

“We’ve been helping refugees fleeing war and terror and stranded in Beirut for years now,” says Nuri Kino, a Swedish journalist and humanitarian aid worker who founded the Sweden-based NGO A Demand for Action in 2014, in a last-ditch effort to save survivors of the Christian (and other ethnoreligious minorities) cleansing in Iraq, Syria and Turkey.

“The situation in Qamishli and other Syrian cities is so desperate now,” says Kino. “Most international charities have left north-eastern Syria because of security concerns, but our little organization, run entirely by volunteers and funded mainly by Middle Eastern Christians in Sweden managed to recruit new volunteers. Facing danger themselves in the conflict zone, our volunteers are distributing food and water to displaced civilians who have lost homes and family members. People who would otherwise be in a very critical situation.”

Kino knows whereof he speaks, because he has had firsthand experience of war and terror.

The latest exodus is not only splitting apart families as they use Lebanon as a  transit station on their way to more prosperous nations. It is also raising concerns that this is the final act in the unfolding tragedy of eliminating the Christian presence from the sacred spaces where it all began. A final solution, from the Islamic extremists’ perspective. 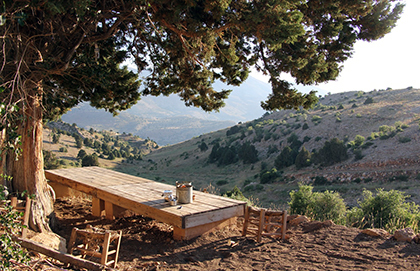 A self-described proud Swedish national and a descendant of genocide survivors himself, he still mourns the loss of his original home and several close family members in Midyat in the Mardin province of south-eastern Turkey,within striking distance of the Syrian and Iraqi borders. His family was part of the ancient Syriac Christian community that once formed the majority of the population in the Tur Abdin (Holy Mountain) region of Turkey, which has now been reduced to 3,000.

Driven by unshakeable faith in God and an unflinching determination to help Christians and other Middle Eastern minorities such as Yazidis and Mandaens, Kino and his volunteers coordinate their humanitarian aid efforts in partnership with the Syriac League, a Beirut-based non-profit organization that seeks to preserve Syriac Christianity’s ancient heritage and provides practical help to refugees.

“Lebanon is a transit country for refugees,” explains Habib Afram, president of the Syriac League. “We work together with A Demand for Action. Together, we help refugees, run a medical and dental clinic for them, help them with their legal requirements. We not only give them material help but given them a sense of solidarity. Our message is: ‘We are walking beside you. You are not alone.’”

“The need is great,” emphasizes Kino, as his cellphone rings relentlessly, with heart-rending appeals for help from desperate refugees with their backs against the wall—appeals that a small organization can never fully meet, despite its heroically dedicated efforts.

Kino and Gebran Kally, a Lebanese volunteer, drive like frantic fugitives themselves, from one refugee ghetto to another on the outskirts of Beirut, visiting the sick with little or no access to medical aid, offering words of comfort, paying rent for destitute refugees, often whole families crammed together in a single room, which comprises their living and sleeping spaces with a cooking stove in one corner.  Unscrupulous and heartless landlords often exploit refugees to the maximum, charging exorbitant rents, such as $400 USD for their miserable one-room hovels.

With no work permits and no way of replenishing their dwindling financial resources, they resort to crime, says Kino, as these refugees hurtle through a downward spiral of despair.

“Please save me,” pleads a bedridden woman with diabetes who lives on a subsistence diet of only bread, while her teenage son attends to all her physical needs.

The pleas for help, the body language of despair and resignation and the hunted look in the  refugees’ eyes, leave a deep impression on me as I accompany Kino and Kally on their errands of mercy. I am profoundly moved by the Christian love that drives them and their own tragic family histories that motivate them to give every last drop of energy to others who walk through the valley of the shadow of death.

“The lobbying we did in Washington and with the European Union made some difference,” says Kino. “Now these (United States, German, Hungarian) governments give aid directly to humanitarian organizations that work with refugees on the ground (not through dubious governmental channels).”

“Canada can do the same,” he suggests, adding that aid-giving governments can send their officials to audit their operations.

Other community leaders suggest that the international community can exert pressure on Syria to ensure the safety and security of minority populations, to stem the tidal wave of refugees leaving the country.

Many Western women mark International Women’s Day by rungs on the status ladder, but elsewhere being female and staying alive is the ultimate victory, writes regular contributor Susan Korah.

Refugees, who face impossible situations even in better times, are being pushed beyond human endurance by the coronavirus pandemic, Susan Korah reports.

Turkey’s decree turning Istanbul’s Hagia Sophia into a mosque was as predictable as an earthquake. Canada’s silence about potential aftershocks is eerily baffling, Susan Korah writes.