“In reading Chesterton, as in reading MacDonald, I did not know what I was letting myself in for. A young man who wishes to remain a sound Atheist cannot be too careful of his reading. There are traps everywhere — "Bibles laid open, millions of surprises," as Herbert says, "fine nets and stratagems." God is, if I may say it, very Unscrupulous.”

― C.S. Lewis, Surprised by Joy: The Shape of My Early Life

Many people associate C.S. Lewis with Christian apologetics, for understandable reasons, as Mere Christianity is the natural next offering to friends and family after sharing our own faith. It is important to recognize, however, that the truth claims of Christianity were just the last step in a progression of faith that started in Lewis’s life with what he called "the baptism of his imagination." The soil of Lewis’s soul was prepared for the truth claims of the Gospel, and ultimately the bending of his will, through a work of fantasy fiction by the Scottish writer and preacher George MacDonald:

“It must be more than thirty years ago that I bought - almost unwillingly, for I had looked at the volume on that  bookstall and rejected it on a dozen previous occasions - the Everyman edition of Phantastes. A few hours later I knew that I had crossed a great frontier. I had already been waist-deep in Romanticism; and likely enough, at any moment, to flounder into its darker and more evil forms, slithering down the steep descent that leads from the love of strangeness to that of eccentricity and thence to that  of perversity. Now Phantastes was romantic enough in all conscience; but  there  was a difference. Nothing was at that time further  from my thoughts than Christianity  and I therefore  had  no notion  what  this difference really was. I was only aware that if this new  world was strange, it was also homely and humble; that if this was a dream, it was a dream in which one at least felt strangely vigilant; that the whole book had about it a sort  of cool, morning innocence, and also, quite unmistakably, a certain quality of Death, good Death. What it actually did to me was  to convert, even to baptize (that was where the Death came in) my imagination. It did nothing to my intellect nor (at that time) to my conscience. Their turn came far later  and with the help of many other books and men. But when the process was complete - by which, of course, I  mean "when  it had really begun" - I found that I was still with MacDonald and that he had accompanied me all the way and that I was now at last ready to hear from him much that he could not have told me at that first meeting. But in a sense, what he was now telling me  was the very same that  he had told me  from the beginning. There was no question of getting through to the kernel and throwing away the shell: no question of a gilded pill. The pill was gold all through.”

This year, we have been part of the launch of a new publishing entity called Cave Pictures Publishing. It is a sister effort of the film company that Mark helped found that has been involved in a number of feature films, including Martin Scorsese’ film Silence, based on Endo Shusaku's challenging book. 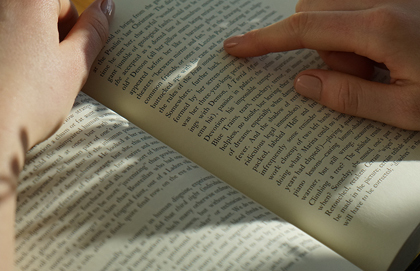 We named Cave after Plato’s allegory, with the idea to create a wall for “modern myth-making.” We believe that myths have been a primary means for humankind to explore meaning and our place in the universe. For some who have been overly exposed to the Christian claims, or for others who due to their perception of it are unwilling to entertain them, story can be an essential step in their spiritual journey. This was the case with Lewis:

It is our hope and prayer that Cave will be the vehicle for the next Narnia or Middle Earth, stories that shape society’s soul as well as the readers'

“I thought I saw how stories of this kind could steal past a certain inhibition which had paralysed much of my own religion in childhood. Why did one find it so hard to feel as one was told one ought to feel about God or the sufferings of Christ?” Lewis asked. “I thought the chief reason was that one was told one ought to. An obligation to feel can freeze feelings. And reverence itself did harm. The whole subject was associated with lowered voices; almost as if it were something medical. But supposing that by casting all these things into an imaginary world, stripping them of their stained-glass and Sunday School associations, one could make them for the first time appear in their real potency? Could one not thus steal past those watchful dragons? I thought one could.”

Lewis’s imagination was converted and baptised by Phantastes, but for Lewis fantasy was also the mechanism to reintroduce him to the deep truths that pointed to, as J.R.R. Tolkien ultimately convinced him, the One True Myth.

What is often overlooked, however, is that it was not only the hint of transcendence, the feeling of joy that story can provide and that awakens the desire for something else, that was formative in Lewis’s spiritual journey. It was also the fact that “good” stories were appealing to him and that “bad” stories were not that he began to question what he later understood to be his false notions of reality:

“Such, then, was the state of my imaginative life; over against it stood the life of my intellect. The two hemispheres of my mind were in the sharpest contrast. On the one side a many-islanded sea of poetry and myth; on the other a glib and shallow ‘rationalism.’ Nearly all that I loved I believed to be imaginary; nearly all that I believed to be real I thought grim and meaningless.”

We believe that stories are sherpas of the soul, and that by challenging presuppositions, they actually prepare the soil for the One True Myth, as was the case in Lewis’s own life. The more he read fiction, notably George MacDonald, the more it became clear to Lewis that he was holding onto false, or at least unappealing, notions of reality.

“All the books were beginning to turn against me. Indeed, I must have been as blind as a bat not to have seen, long before, the ludicrous contradiction between my theory of life and my actual experiences as a reader. George MacDonald had done more to me than any other writer.”

It is our hope and prayer that Cave will be the vehicle for the next Narnia or Middle Earth, stories that shape society’s soul as well as the readers.’ We are focusing on the medium of comics and graphic novels as they are the currency of conversation among young Millennials and the upcoming Generation Z. Moreover, comics and graphic novels have crossed into the mainstream, into other media formats, and exert enormous influence on global popular culture.

The seamless blending of text and image that distinguishes comics and graphic novels from other literary forms make them accessible to multiple generations and multiple geographies. By cultivating modern myths in this unique blending of word and picture, Cave aims to baptize the contemporary imagination with beautifully crafted stories that are true to reality and affirm the value and universality of the human soul.

Poetry To Provoke A City

City managers rarely, if ever, consider haiku when approving high rise developments, but Cardus Social Cities Program Director Milton Friesen says getting serious about great urbanism means crafting our metropolises to be the domain of the poet as much as the planner.

The Ache of Impatient Gardening

When Alastair Sterne was sent to plant a new Anglican Network in Canada church in downtown Vancouver, he never dreamed how arid the soil would be. Then the ache in his heart became the joyful hope of trust in God.