There is a large religious news story unfolding across the land, and it is being covered well by the regular mainstream news. A miracle? Not really, but it is about a miraculous relic.

The forearm and hand of St. Francis Xavier, the 16th-century Jesuit missionary, is currently visiting Catholic sites across the nation. It has been out east, was with us in Kingston this week, and will be in Toronto from Friday to Sunday, before heading west.

You can read about it in the exemplary National Post.

Or if you prefer the state broadcaster on radio, or on video.

I had my say in the Catholic press here.

The pilgrimage of the relic is being sponsored by Catholic Christian Outreach (CCO), Canada’s national campus missionary movement, with which I have worked closely for more than a decade. My colleague Andrew Bennett spent part of Christmas with CCO, and related his happy experience.

“St. Francis is the patron saint of our organization. We just really love him,” said Angèle Regnier, the co-founder of CCO. “We want to keep the Catholic faith alive for university students. So many young people go to university and in that freedom and all that university life has to give, they walk away from the Catholic faith.”

“That’s what St. Francis was in his day,” continues Regnier. "He was an athlete, good-looking, he dressed well, he danced and partied more than he studied. Thanks to the witness of his roommates, after a few years, he came to the realization that not everything that was meaningful was found in just the pleasures of life.”

There is much to be said about the St. Francis Xavier pilgrimage across Canada, but permit me to highlight just that one thing here at Convivium. The roommates. For they tell us something important about friendship for mission.

St. Francis Xavier was 23 when he arrived at the University of Paris, one of the principal academic centres of Europe. His was assigned to room with Peter Faber, his contemporary, and an older student, Ignatius from Loyola. A fellow Spaniard, Ignatius was 37, had been a soldier and after being wounded in war had had a profound religious conversion.

Francis was initially put off by this odd, mature student, and did not care for his religious preoccupations. Peter he liked better, and his friendship with Peter kept him open to what Ignatius might have to offer, as Peter was more favourably disposed to the older roommate. Over time Francis would come to see in Ignatius’ kindness and readiness to assist others – including Francis himself – something to challenge his initial dismissiveness. 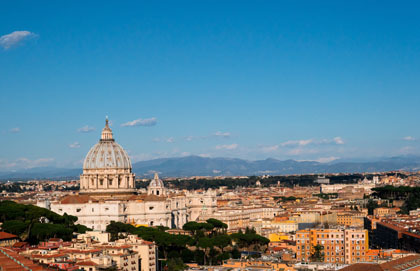 Beaming At The Vatican
Dust, Bones and the Promise of Life
100 Years of Fortitude

The three became friends, and in time, Ignatius would put to Francis a biblical question that would change the worldly path that Francis was set to follow:

“Master Francis, what does it profit a man if he gains the whole world and suffers the loss of his own soul?” (Mark 8:36).

Francis had heard that before, as everyone at the University of Paris in the 16th century was biblically literate. But now he heard it from Ignatius, and it was different coming from his friend. He was converted by Jesus’ question, and he joined Ignatius and Peter Faber to become the first members of the Company of Jesus, later to be known as the Society of Jesus.

That original name “Company of Jesus” was rooted in the martial background of Ignatius, but can also be thought of in terms of life together, of convivium, of being companions together along the way with Jesus.

St. Francis Xavier reminds us that friendship is a powerful means that God uses for mission. We are warned by our parents not to fall in with bad company, lest it lead us astray. Francis fell in with good company on campus, and it lead him the way, the truth and the life.

Young people considering the life of St. Francis Xavier can ask themselves about their own friends. In choosing our friends we choose in part who we would like to be. Is there an Ignatius among them?

Ignatius could not have started the Jesuits alone. He too needed friends, companions for mission. If we seek new ventures for the Gospel, do we have a Peter Faber or Francis Xavier in our midst to help us?

In the treasury of letters that Francis and Ignatius exchanged in later life we see the beauty of their friendship, sustained even after Francis departed for the missions in India and Asia, never to see his friend again. In one such letter, Francis writes:

Among many other holy words and consolations of your letter I read the concluding lines, ‘Entirely yours, without power or possibility of ever forgetting you, Ignatio’. I read them with tears, and with tears now write them, remembering the past and the great love which you always bore towards me and still bear.

He who does not love his brother whom he has seen, cannot love God whom he has not seen. (1 John 4:20)

St. Francis Xavier could only do what he did because of the friendship that St. Ignatius Loyola extended to him.

Friendship for mission is part of God’s plan for the spread of the Gospel, as we read in in St. Paul’s life:

and when they perceived the grace that was given to me, James and Cephas and John, who were reputed to be pillars, gave to me and Barnabas the right hand of fellowship, that we should go to the Gentiles and they to the circumcised (Galatians 2:9)

The right hand extended in friendship, for companionship along the way, made it possible for the mission to continue to both Jews and Gentiles alike. It’s a lesson to be remembered as St. Francis Xavier’s right hand travels the land.

Dust, Bones and the Promise of Life

Father Raymond de Souza finds in the rare coincidence of Ash Wednesday falling on Valentine’s Day a message for the heart in the midst of ashes.