We featured here yesterday a beautiful testimony of unity and healing after religious violence. The occasion was the massacre at the Pittsburgh synagogue. The result was “rings of peace” around synagogues, formed by Muslims in a manifestation of solidarity in grief.

That took place close to home. Something more remarkable took place in Oran.

I expect that you know little about Oran. I confess that I had never heard of Algeria’s second city until recently. But what took place there last Saturday was a truly historic moment, a moment full of hope.

For the first time in history a beatification ceremony was held in a Muslim country. The Catholic bestowal of the title “blessed” expresses the Church’s conviction that the person is in heaven; it is the final step before canonization as a saint. The new “blesseds” in this case were martyrs from 1994 to 1996, killed by Islamist jihadis during Algeria’s civil war.

In 1991 an Islamist party, the Islamic Salvation Front (FIS), won the first round of national elections. The military stepped in, seized power, cancelled the elections and banned the FIS. This provoked a brutal civil war, with some 100,000 Algerians killed in the subsequent decade. The civil war did not spare foreigners, and elements of the Islamist rebels also targeted Christians in Algeria.

The martyrs declared in Oran included the former bishop of that city, Algerian-born Pierre Claverie, and 18 others. The bishop was murdered by a bomb at his home, which also killed his Muslim driver, Mohamed Bouchikhi, a reminder that Muslims are the most numerous victims of jihadism, dying even when Christians are the targets.

(Though the Muslim driver could also be considered a martyr of sorts, the Catholic Church only beatifies or canonizes Catholics.)

The declarations of martyrdom were welcomed broadly in Algeria, which is almost entirely Muslim. Indeed, celebratory events were held, together with Catholics, at the local mosque.

The 18 other martyrs came from France, Spain, Tunisia and Belgium, and were killed between 1994 and 1996. The best known of the martyrs are the monks of Tibherine, French Trappists who were kidnapped from their monastery south of the capital Algiers in 1996. Islamist forces demanded the release of prisoners in France. When that did not happen, the monks were beheaded. Only their heads were recovered for burial. The story of the Trappists was the subject of the 2010 film, Of Gods and Men, which was awarded the Grand Prix at Cannes in 2010.

Less than 25 years ago, Islamist terror was so prevalent in Algeria that even monks who worked among the poor people, providing education and medicine, were not safe. The murder of the French monks so shocked France, the former colonial power in Algeria, that church bells throughout the country were solemnly tolled after the bodies (heads) were discovered. Little did France know then that in 2016 a priest would have his throat slit while offering the Holy Mass in France itself.

In 2018, in Oran, in the very same country, a major Catholic religious event could be held openly and in peace, albeit with more security than is usual at such events. The declarations of martyrdom were welcomed broadly in Algeria, which is almost entirely Muslim. Indeed, celebratory events were held, together with Catholics, at the local mosque.

The past does not determine the future. I recall being in Birmingham in 2010 for the beatification of Cardinal John Henry Newman, by Pope Benedict XVI, who traveled to England to conduct the ceremony personally. He began his address with the following:

This particular Sunday also marks a significant moment in the life of the British nation, as it is the day chosen to commemorate the seventieth anniversary of the Battle of Britain. For me as one who lived and suffered through the dark days of the Nazi regime in Germany, it is deeply moving to be here with you on this occasion, and to recall how many of your fellow citizens sacrificed their lives, courageously resisting the forces of that evil ideology. My thoughts go in particular to nearby Coventry, which suffered such heavy bombardment and massive loss of life in November 1940. Seventy years later, we recall with shame and horror the dreadful toll of death and destruction that war brings in its wake, and we renew our resolve to work for peace and reconciliation wherever the threat of conflict looms.

It was a moment filled with the weight of history, and the marvels of providence. Who could imagine that a German pope would one day be welcome in Britain, and would salute the British forces who fought against the Luftwaffe? 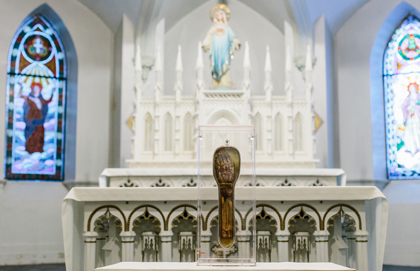 St. Francis Xavier and Friendship for Mission
An Amalgam of Anniversaries
A Conversation with David Johnston

Reconciliation, mercy, healing – all is possible on the other side of the experience of evil and horrific violence. The monks of Tibherine especially demonstrated that the seeds of reconciliation are planted by those who refuse to be conquered by fear and hate.

The most famous of the Algerian martyrs was the superior of the Tibherine monastery, Dom Christian de Chergé. He and his brothers had decided, fully knowing the danger, to remain in Tibherine, in solidarity with their Algerian brethren who also faced terrorism and violence. Whatever harmony exists now in Algeria between Christians and Muslims was bought by the solidarity of the monks then, the price paid in their blood.

Dom Christian is famous for what he wrote before his death, and was discovered afterward. It was his last testament, written for the occasion of his martyrdom, which he knew was coming. It requires no commentary, so I simply conclude with it here:

If it should happen one day—and it could be today—that I become a victim of the terrorism which now seems ready to engulf all the foreigners living in Algeria, I would like my community, my Church and my family to remember that my life was GIVEN to God and to this country.

I ask them to accept the fact that the One Master of all life was not a stranger to this brutal departure.

I would ask them to pray for me: for how could I be found worthy of such an offering?

I ask them to associate this death with so many other equally violent ones which are forgotten through indifference or anonymity.

My life has no more value than any other. Nor any less value. In any case, it has not the innocence of childhood.

I should like, when the time comes, to have a moment of spiritual clarity which would allow me to beg forgiveness of God and of my fellow human beings, and at the same time forgive with all my heart the one who would strike me down.

I could not desire such a death. It seems to me important to state this.

I do not see, in fact, how I could rejoice if the people I love were indiscriminately accused of my murder.

It would be too high a price to pay for what will perhaps be called, the “grace of martyrdom” to owe it to an Algerian, whoever he might be, especially if he says he is acting in fidelity to what he believes to be Islam.

I am aware of the scorn which can be heaped on the Algerians indiscriminately.

I am also aware of the caricatures of Islam which a certain Islamism fosters.

It is too easy to soothe one’s conscience by identifying this religious way with the fundamentalist ideology of its extremists.

For me, Algeria and Islam are something different: it is a body and a soul.

I have proclaimed this often enough, I think, in the light of what I have received from it.

I so often find there that true strand of the Gospel which I learned at my mother’s knee, my very first Church, precisely in Algeria, and already inspired with respect for Muslim believers.

Obviously, my death will appear to confirm those who hastily judged me naive or idealistic: “Let him tell us now what he thinks of his ideals!”

But these persons should know that finally my most avid curiosity will be set free.

This is what I shall be able to do, God willing: immerse my gaze in that of the Father to contemplate with him His children of Islam just as He sees them, all shining with the glory of Christ, the fruit of His Passion, filled with the Gift of the Spirit whose secret joy will always be to establish communion and restore the likeness, playing with the differences.

For this life lost, totally mine and totally theirs, I thank God, who seems to have willed it entirely for the sake of that JOY in everything and in spite of everything.

In this THANK YOU, which is said for everything in my life from now on, I certainly include you, friends of yesterday and today, and you, my friends of this place, along with my mother and father, my sisters and brothers and their families – you are the hundredfold granted as was promised!

And also you, my last-minute friend, who will not have known what you were doing:

Yes, I want this THANK YOU and this GOODBYE to be a “GOD BLESS” for you, too, because in God's face I see yours.

May we meet again as happy thieves in Paradise, if it please God, the Father of us both.