When Canada’s new federal government announced its Syrian refugee resettlement program, there was initial confusion about the status of single males. Would only women, children and families be admitted, as single men were thought to be a security risk? No, clarified Deborah Tunis, the senior bureaucrat summoned out of retirement to run the program for Citizenship and Immigration Canada. Preference would be given to families, women, children and sexual minorities. Single men would not be excluded, but they would be sent to the bottom of the priority list. Except for gay men, who would be given priority because of their particular vulnerability. Seems like immigration officials had it all covered. Who else might be vulnerable? Perhaps Christians? Did anyone at Citizenship and Immigration think about Christian clergy, priests and monks, many of whom are celibate? No, in fact, they didn’t, even as they worried about sexual minorities. The depredations of the Syrian civil war and ISIL have created many victims. But in Canada’s refugee resettlement, some victims are more equal than others.

Refugee policy is only the latest area of public life to be touched by sexual politics. The Alberta government now has schools in its sights, with the education ministry mandating that school boards adopt policies for transgender students that include, inter alia, the right of boys who self-identify as girls to use the girls’ bathroom and change room. The Catholic bishop of Calgary, Frederick Henry, denounced the measures as “totalitarian” and “anti-Catholic.” Edmonton’s CBC radio interviewed me about the controversy and asked if Bishop Henry had not missed the hip new Pope Francis vibe, assuming he would be totally cool with it. “Hasn’t Pope Francis called for a merciful Church?” Yes, but what about mercy for teenage girls in the locker room? The bishop’s point was more about the State rather than the church. And from the bureaucratic State, there is no mercy.

My colleague at the National Post, Mireille Silcoff, has a daughter not yet ready for the ideological adventures of elementary school. Nevertheless, Bea, at four years old, is causing no little perplexity to Mireille and her husband, Mike. “He is an atheist, and I am the sort who spends what little time she spends in synagogue silently replacing every utterance of the word God with the words organizing energy. But I wanted Bea to know Hebrew and the holidays and her history. I went to a religious school myself, I told Mike. If there is any indoctrination, any narrow thinking, I will see it; I will know how to undo it. It was the broad thinking I wasn’t prepared for: ‘Did God make everything, Mommy? And if God made everything, then who made God?’” Organizing energy, I would presume. It’s a neat trick, to try and teach children about history and holidays and not what the history is about or what the holidays are for. It turns out that it is harder than Mireille and her husband thought. The danger of teaching children to be narrow-minded is that they don’t yet know how to ignore the interesting questions.

The holidays. Every year I note with dismay how the holiday season creeps up on us ever more quickly. Halloween ghosts barely drift away before the Christmas angels flutter in. So I was surprised to receive a notice that went in the opposite direction. The University Club at Queen’s advertised a Mardi Gras Tasting Dinner to be held February 27, 2016. Mardi Gras is French for Fat Tuesday, so the first thing awry is that the dinner was set for a Saturday. Moreover, Mardi Gras is the Tuesday before Lent begins on Ash Wednesday—a day of “fat” before the beginning of the Lenten fast. Ash Wednesday this year is February 10. So Mardi Gras 17 days into Lent is like celebrating St. Patrick’s Day on April Fools’ Day. If a late Mardi Gras only reflected a desire for a shorter Lent, it would be regrettable; that it likely means Lent has been forgotten altogether is more disturbing. 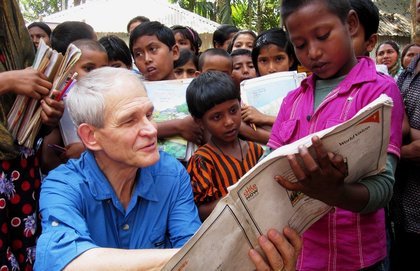 Some holidays are too important to shift around. Like Valentine’s Day, the dinner for which is held punctually on February 14 at the University Club, thank you very much. The Globe and Mail does an annual Valentine’s Day poll: highly unscientific but very popular. Last year’s version got 20,000 responses. The lead question: “Do you believe in the idea of lifelong monogamy?” Only 52 per cent answered yes; 37 per cent were not sure, and 12 per cent rejected the idea. The result, if accurate, leads to another question: Does the fact that so few believe monogamy is possible explain why people don’t get married? Or is it because so few get married that so few believe in lifelong monogamy? It’s likely a bit of both, and neither is good for families. Monogamy is not, according to current attitudes, a very attractive word. But it means stability, which is rather attractive to those who have experienced the opposite. Valentine’s Day is supposedly for romance, but truly romantic ideas—the adventure of a love that endures—are declining.

Love that endures is costly, paid for by the discipline of commitment and measured by sacrifice. It’s not free. That might come as news to Antonio Cromartie, an NFL player with the New York Jets. His wife, Terricka, is expecting twins this spring. Something of a surprise, as Antonio had himself fixed a while back: “In my head we were good to go, we were having free sex!” said Terricka. Cromartie has previously had children with eight different women. It will be a busy spring in the Cromartie household. In addition to the twins, Mr. and Mrs. Cromartie are working on a book about blended families and, of course, considering a reality TV show.

Easter is the holiest of holy days for Christians, and yet it remains a matter of division. The Western Easter is early this year—March 27—while the Eastern Easter is late—May 1. Over the years—actually since the 11th century—there have been various musings, and occasionally efforts, to reconcile the date so that all Christians would celebrate Easter together each year, as opposed to by calendrical coincidence alone. Pope Tawadros II, head of the Coptic Orthodox Church of Alexandria, wrote to Pope Francis in 2014 to propose a fixed date for Easter. Last fall, Pope Francis accepted the idea as something all Christians should discuss. In January 2016, the Archbishop of Canterbury, Justin Welby, expressed his support. So it might come to pass as a significant gesture of Christian unity. Of course, abandoning the present lunar mode of calculation would be a departure from the Jewish approach to calculating feasts. A fixed date for Easter, though, would make it easier to figure out when Mardi Gras falls.

Pope Tawadros II visited Queen’s University in October 2014, giving a public lecture and taking questions. A local Coptic woman raised the question of feasts—Christmas in particular. It has long been an issue for the Coptic diaspora in North America that their children celebrate Christmas, as they do in the East, twelve days after the Western Christmas. Might the Coptic Orthodox Church adopt December 25 for Christmas, at least in North America, the lady asked, so that their children do not miss out? Pope Tawadros said that the idea was under examination, but indicated that he was not in favour. The Coptic identity depends in part on the liturgical rhythm of their calendar, he replied, and a liturgical calendar out of sync with the secular excesses of Christmas may be a good thing. How to measure and mark time is at the heart of our attitude toward our origin and destiny, and of our place in the universe. That’s why it has given rise to such disputes in history, even if now we seek greater concord.

Measuring time has largely been the province of the Church, broadly understood, rather than the State. But at the height of its imperial power, Her Majesty’s government had pretensions of sacral authority and decided to do something about Easter. In the Easter Act 1928, the British government gave itself the authority to set the public holiday of Easter on the Sunday after the second Saturday of April—so that it would range only from April 9 to 15 each year. No government since has ever used that authority, but it remains on the books. A few years back, the Guardian thought the Easter Act should be enforced, the smack of State authority being just what Easter needed so that the “secular majority… would at last have an annual spring break that makes a bit more sense.” An Easter holiday convenient for secularists? That’s why the State is not charged with setting religious holidays.

Todd Doherty, the new MP for CaribooPrince George does not have imperial ambitions, but he does have his sights on the calendar. Or at least on how we record our dates. Amazingly, the ever expanding State still allows Canadians to write dates however they wish. Month/Day/Year, as the Americans do, contrary to logic but matching common speech. Or Day/ Month/Year, as the British do. Or Year/Month/Day, as was mandated by the International Organization for Standardization back in 1988, with order 8601. The last option is what Doherty proposes be enshrined by Parliament for Canadian legal proceedings. There are other solutions, such as writing out the month (25 March 2016) or, as is my preference, using the classical addition of Roman numerals for the month (25III-16). How do you like your dates? With liberty, I would propose you write them however you like.

As Easter approaches, secular news outlets mark the occasion by demonstrating their ignorance in their twice yearly foray into religious journalism. The results are quite hilarious. A favourite entry of mine is from the online magazine Salon, which states, “’It was Saturday that Jesus Christ went to Hell.’ This is one phrase that Christians, whether mainline or evangelical, Catholic or Protestant, will likely not hear from the pulpit this week.” Really? It’s part of the creed Christians often recite at Sunday worship. The descent of the dead Jesus to hell, Hades, Sheol or the dead is a much discussed, and sometimes disputed, theological question. Indeed, “the harrowing of hell” was a central part of medieval piety. God in hell? What other startling things will the secular salons reveal? Perhaps that God is three and one? Or that God could die? Shocking! A blessed Easter—and preceding Lent—to all!

Over his 42-year career with World Vision Canada, David Toycen led the organization to raise more than $4 billion to assist some of the world’s most vulnerable children, families and communities.