Last week, Banksy pulled a stunt that left the world buzzing and my family theorizing across the turkey and stuffing. Shortly after the gavel fell at an auction in London, confirming that Girl With Balloon had sold for £1 million, the print fell halfway through a shredder secretly built into the frame.

Afterwards, Banksy posted a video to Instagram which shows how, years ago, he had installed the shredder into the frame “in case it was ever put up for auction.”

On the surface it seems outrageous: destroying something you’ve just sold. But Banksy wasn’t the seller. When this print was originally sold, it was bought directly from the artist. Last week, that print was being sold on the secondary market—where, consequently, the artist gets no cut of the profits.

Is anyone really going to blame the artist for not disclosing every detail of his piece? It’s art, and the concealed shredder is justifiably a part of the work. With a secret seller, a secret buyer, and an artist with nothing to lose – this stunt is all statement and no scandal.

So what is Banksy trying to say?

In that same Instagram video, Banksy wrote: “The urge to destroy is a creative urge,” attributing the quote to Picasso. While Picasso might have once said this (I’m not certain, my Internet search yielded only inspirational quotes on Pinterest boards), the quote actually belongs to 19th century Russian anarchist Mikhail Bakunin (certainly a less whimsical addition to anyone’s Pinterest).

For Picasso, creative destruction was a means of breaking the artistic status quo and blazing a trail to a new artistic movement. Each of his acts of “destruction” were simultaneously creations. He would shock and amaze with each piece—but, unexpected as they were, there were tangible products of art; something and not nothing.

Invoking the words of Bakunin seems to present an easy answer: tear it down (or shred it all) and start again. 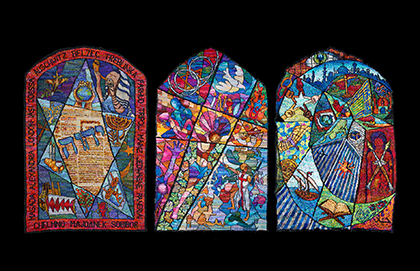 Banksy has done something similar: when the intact Girl With Balloon was altered, a new piece was created. It even has a new name: Love Is In The Bin.

In the same way that such artistic destruction is intrinsically creative, it is also integrated. Banksy’s work is a piece of art history. In this he has no choice.

No matter what Banksy creates, the current artistic milieu of which he is member inherited its spirit from its predecessors and will produce successors, whether by reaction or resistance. Just as there would be no Love Is In The Bin if Girl With Balloon had not first existed, so today’s art owes itself to its influences—as much as artists may feel they are cutting themselves free. Artistic innovation is, argues Gregory Wolfe, “less like an act of revolutionary destruction and more like what a musical composer would call ‘theme and variations.’”

The other angle to all this is Bakunin, for whom destruction was the key to social change.

Banksy’s staunchly anti-capitalist, anti-establishment rhetoric holds up a mirror to the decay of the current age. Invoking the words of Bakunin seems to present an easy answer: tear it down (or shred it all) and start again.

However, as James K.A. Smith writes, we see a false dichotomy. It’s then that the ideas of Bakunin become quite appealing. After all: “If the only options are the status quo or revolution, who wouldn’t man the barricades?”

Each call to revolution is an invitation to start thinking creatively about third options. Those who articulate the brokenness of our social structures exhibit an innate creative desire (Yes, even the anarchists). The underlying desire is to create a system that works.

But just as artistic innovation is responsive and continuous, social revolution isn’t the clean slate that generations before us believed it to be.

Banksy’s art signals to me the breakdowns of a world that was once whole—and that will one day be whole again. I believe I know the reason for all that’s wrong in the world, and how it all will end. For me and fellow Christians, this is a hopeful frame: we work not as creators but as the created. Redemption is behind us and restoration lies ahead; working towards a promise is a far lighter load.

For those who see the world differently, the onus of restoration is on all of us. If the current structures are failing, people are responsible for fixing them—or starting anew. Starting anew is destructive, creative, and frankly far more dazzling than any incremental change. But just as artistic innovation is responsive and continuous, social revolution isn’t the clean slate that generations before us believed it to be.

All in all, I think Banksy is once again holding up the mirror. This time, he’s included in the reflection. He has undoubtedly created a statement piece—this phoenix is now estimated to be worth double its original value. Love Is In The Bin will surely soon be positioned in some exhibit of pop culture – once they figure out how to glass in those pesky dangling shredded bits.

In an immediate sense, Banksy has shown us our eagerness to commodify art. (This whole stunt is already a marketing gimmick.) He also continues to benefit from the capitalist world he inhabits (though to his credit, likely not lucratively. If you’re wondering, he continues to sell artwork privately, though we can only speculate to what scale).

On a larger scale, fitting with his larger body of criticism, Banksy is voicing deep criticism in which he is not alone. Perhaps this is an opportunity to continue asking ourselves the question: How best do we move forward?

During the years he spent knitting together a vast artwork of ecumenism, Kirk Dunn thought he might be wasting his time. Convivium’s Rebecca Darwent writes that what he produced is just what our present time needs.

Instead of perpetuating the view that fine art can only be valuable to expert historians, could art be more universally invitational if a viewer is privy to the piece's imperfections? Perhaps this transparency of process could be valuable in our context today I wouldn't argue against the fact that a...