It is unusual to hear prayers on an Indian Reserve offered in Arabic, but then the dedication of children's playground built by a Muslim community on Saskatchewan's Standing Buffalo First Nation earlier this month was an unusual occasion.

It was the culmination of a unique project that involved the 1,200 Lakota Sioux who are members of the reserve in the Qu'Appelle Valley, 60 kilometres northeast of Regina, and the Ahmadiyya Muslims in the province. The Ahmadiyya Muslim Community follows the teachings of the Holy Quran, but its followers are regarded as heretics by orthodox Muslims because they tolerate other religions and do not consider Mohammed the sole prophet.

Like the First Nations, whose traditional religious beliefs were outlawed in the 19th century by the Canadian government, Ahmadi Muslims are persecuted in Pakistan to this day.

"One of the fundamental tenets of our faith is to develop relationships and build bridges with others," explained Imam Zeeshan Ahmed, "To serve God you must serve others. Words sound good, but they don't mean anything if you don't establish a bond, a relationship with others.

“This play ground was a blessing for us. We spent more than 1,000 hours of volunteer labour to build a better society, The Creator, God, has given us this opportunity to work together as one nation. It sends a message to the children, and to future generations of children of Standing Buffalo. " 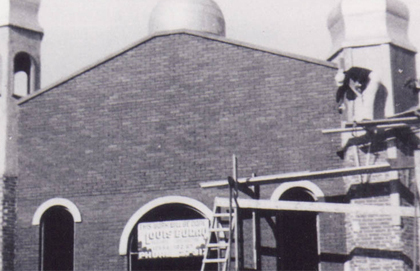 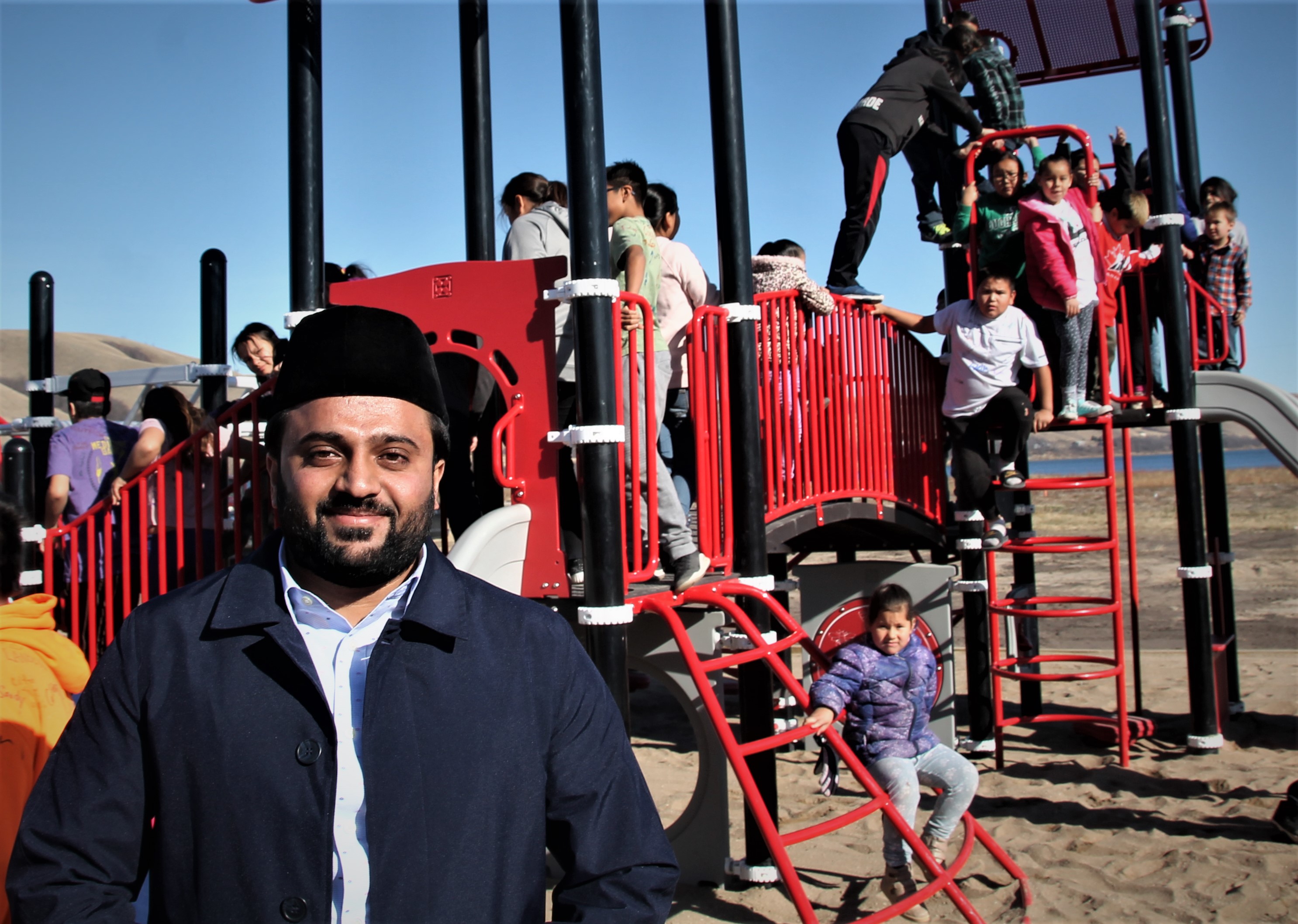 Imam Zeeshan Ahmed with children playing on the new playground

Ahmed fled Pakistan with his parents when he was still an infant and was raised in Toronto, where he studied theology. He became an Iman three years ago and did missionary work in Africa and Mexico before coming to Saskatchewan in 2016. When the movement's Caliph came to Regina to inaugurate the Mahmood Mosque, he instructed his Imams in Regina and in Saskatoon to build bridges of understanding with the Indigenous population. Since then, Ahmed has driven across the province to visit more than 50 First Nations.

Standing Buffalo Chief Rodger Redman explained that the reserve's relationship with its "Muslim brothers" started with an invitation to dinner at Christmas. It developed in May when the Muslim community came to help after a grass fire destroyed several houses on the reserve.

"A lot of their beliefs are similar to ours," says Redman. " The relationship speaks to a lot of things we as First Nations wish to promote: the battle against racism and intolerance. We have been to their mosque and prayed with them, and they have attended one of our sweat lodges."

The $70,000 play structure, which includes swings, slides, monkey bars and merry-go-rounds, was donated by Tipi Insurance. About 30 of Regina's Ahmadiyya Muslims decided to do the volunteer work to assemble it. Initially it was supposed to be a 'weekend job' but it took several months and about $40,000 worth of “free” labour to complete.

"Every project has its complications and delays. In the end, we were excited to be able to work together," said Imam Zeeshan Ahmed. "One of our fundamental tenets is that if you wish to serve God, you must be of service to others. My faith is not complete without service. The playground sends a deep message that this is what two faith communities can achieve when they work together."

Peter Stockland visits Al Rashid in Edmonton, Canada's first Mosque, to talk about their efforts to rebuild community and offer support to evacuees of Fort McMurray.

Convivium contributor Alan Hustak reports from Montreal on the construction plans slated for the mass grave of 6,000 Irish who died in the mid-19th century of famine.

The Land of White Silence