There is an unnerving silence in the air these days as you drive along the empty stretch of any highway in Saskatchewan.

The promise of spring is in the air. But as invigorating as the warmth of a season coming alive may be, there is a pervasive melancholy, a deep ache. You are never far from a reminder of death.

The snow thaws and from behind the wheel a driver can’t help but notice the crosses that have been planted in the ditches to mark the spot where people have died in automobile accidents over the years. There are a lot of them: every quarter section or so, it seems there is a cross wreathed in faded artificial flowers.

Poking through the snow near Rocanville are four well-tended crosses beneath four tall fir trees that mark the spot where four young friends were killed in a head-on collision in 2010.

Between Yorkton and Melville, two more crosses face each other in the barren fields on either side of Highway 35.

Just outside of Swift Current, on the Trans-Canada Highway, you will find a black granite memorial to four hockey players killed in a bus accident in 1986. At the junction of Highway 35 and Highway 335 near Tisdale are six crosses, three big ones and three little ones, a reminder of an accident that wiped out a family in 1997.

Now, more crosses will be planted at the same intersection to mark the spot where the collision between a semi-trailer and a bus carrying the Humboldt Broncos hockey team ended another 16 lives.

Each freak highway accident on an open plain with unobstructed views is a tragedy made all the more agonizing by seeming so inexplicable. According to Transport Canada, you are twice as likely to be killed on a Saskatchewan highway as you are in either Ontario or Quebec. Saskatchewan has 15 fatalities for every 100,000 licensed drivers; Quebec and Ontario, six.

Beyond statistics, the pain of swift tragedy has its own awful potency here because Saskatchewan is a small place where people’s lives constantly cross in unexpected ways.

Beyond statistics, the pain of swift tragedy has its own awful potency here because Saskatchewan is a small place where people’s lives constantly cross in unexpected ways. In my case, the son of a French Canadian doctor who tended one of my late relatives was aboard that bus. I made plans to attend the funeral when it was learned that the young man had not been killed after all. Relief that he was somehow alive was tempered by sorrow that someone else his age was dead.

It is therefore easy to imagine the high spirits inside the bus that in a split second turned to horror when the bus carrying the Broncos from Humboldt to a playoff game in Nipawin was ripped apart in the crash.

Until that accident on the first Friday in April – Good Friday this year on the Julian Calender, incidentally – few Canadians had ever heard of Humboldt.

Follow the horizon for 200 kilometres straight north of Regina on Highway 5 and you’ll arrive in one of the province’s smallest cities. The German Catholic pioneers who arrived in 1900 named it for explorer and scientist Alexander von Humboldt, (1769-1859). Just down the road is St. Peter’s Cathedral, and St. Peter’s Abbey in Muenster. 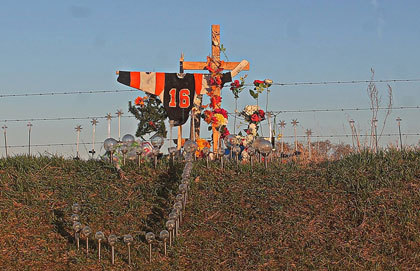 Tangible Eulogies
Buffeted Back
The small laws of civil life

The accident has, as if by the infinite cruelty of a particularly cold and indifferent god, put Humboldt on the map. The international tragedy has torn away the part of the heart where hope and pride in the community live.

The death of the 16 has not resonated just because of social media. It goes way beyond that.

Hockey, it has been said, is a secular religion. There isn’t a town or city in Canada that doesn’t have an outdoor rink. The cliché of Canadian boyhood is a game of street hockey, or slashing away on a frozen pond. An enshrined ritual of that secular religion is the team bus trip.

There isn’t a mother in the country who isn’t anxious as her children leave aboard a school bus. Yet any kid who has travelled by bus and spent hours on the road with teammates moving from arena to small town arena is part of a unique fraternity. Each team, each player on a team, amateur or professional, is a link in a chain of dependencies, some weak, some strong. The players develop a bond on the bus. They look out for each other. That bond is both strong and humbling. You could see it in the image of the survivors who held hands from their hospital beds.

As the great goalie Glenn Hall, the most famous NHL player to come out of Humboldt, said: "They are part of the Prairie, and we adopt these kids as our own. Everyone has a stake in their victories and in their defeats."

Or in Premier Scott Moe’s words: "At our core, we are all one small town. Our community is shattered."

Sheldon Kennedy, who survived the 1986 crash that killed four members of the Swift Current Broncos, was in Humboldt to lend emotional support. Kennedy probably knows the importance of emotional support as well as anyone alive. Long after the horrific road accident 32 years ago, he crawled back from the wreckage of a life very nearly destroyed by sexual predator Graham James, his junior hockey coach. In Humboldt, he spoke of the "grieving process, and of pain and more pain and of fear," that will eventually recede but never really go away.

A hockey arena is often a sacred space. The Elgar Petersen Arena was such a place during the interfaith vigil on the Sunday after the accident. Prayers were said, blessings and benedictions given, but even the team’s chaplain, (and, yes, hockey teams in the West still have chaplains) had to confront the dark night of his soul when he was among the first to arrive at the scene of the accident.

Collections have been taken, hockey sticks have been placed on front porches from coast to coast, and green and gold ribbons, the colour of the Broncos jerseys, sprout from lapels in solidarity. The small gestures get us through the period of mourning, though it will take decades for the scars to heal.
Subscribe to our weekly newsletter and never miss another one.
Sign-Up Now

"All I saw was darkness, and hurt and anguish and fear," Pastor Sean Brandow said. "And I had nothing. Nothing. I’m a pastor. I am supposed to have something."

The best he could do was quote from the book of Psalms for solace.

Prime Minister Justin Trudeau and his son were present. Trudeau didn’t speak. He didn’t have to. Being there in support was enough.

As the funerals have continued, the province has been awash in tears. Even in sleep, its residents are confronted by the reality that Bobby Kennedy, speaking of the assasination of Martin Luther King Jr., took from Aeschylus, the father of Greek tragedy: "And even in our sleep, pain which cannot forget falls drop by drop upon the heart, until in our own despair, against our will, comes wisdom through the awful grace of God."

They are to be forgiven, these days, who look up from Saskatchewan’s still cold earth and wonder at the seeming silent indifference of that God.

Humboldt will, of course, one day come to grips with its numbing grief. Spring always follows the ravages of even the coldest winter. Collections have been taken, hockey sticks have been placed on front porches from coast to coast, and green and gold ribbons, the colour of the Broncos jerseys, sprout from lapels in solidarity. The small gestures get us through the period of mourning, though it will take decades for the scars to heal.

But the promise of spring is in the air.

Alan Hustak is a veteran Canadian journalist and author who recently returned to live in his small Saskatchewan home town.

So often, lives are lost as they journey the roads across our country. Alan Hustak reflects on the shrines that sit as visible reminders of lives.

A home on the waves and a creature all her own. She has carried me, doubts and all.

The small laws of civil life

It's a habit that has to be distinguished from the great roiling public acts of law-breaking such as the hockey and G20 riots that have plagued Toronto, Vancouver, and Montreal in the past few years ...