If asked for advice in evaluating candidates for political leadership, I usually reference three Cs—competence, character, and conviction—as useful criteria. Of late, though, it would seem that crack, cocaine, and cannabis are the more common focus of political dialogue.

Using my criteria, there is some evidence that Mayor Ford is a competent leader. However, the evidence is overwhelming that his character is wanting and his anti-institutional populism has never been my cup of tea. It seems clear that Mayor Ford should have resigned some time ago. His private-life behaviours morally disqualify him from earning the present respect of the citizenry and hence, will ultimately make him ineffective as a mayor. If he still believes political leadership remains an act of service, not an entitlement, then the right thing to do in the present cloud is to resign for the greater good.

The above is a moral judgement, one shared by many of my fellow citizens. Now, what I find curious is that the media—so quick to censure those who would impose their morality on others—has sung such a different tune in l'affaire Ford

Someone has slipped a potent blend of casuistry, contradiction, and condescension to the media.

Consider how the issue of Ford's drug use, for example, has been framed. Generally, a socially libertarian spirit prevails, while moral judgments against those who chose to partake in drugs are ridiculed. Journalists routinely ask candidates if they've inhaled. Those who haven't are portrayed as naïve fundamentalists short on street smarts. When Justin Trudeau admitted that he attends parties in which joints are sometimes passed around the room and he occasionally joins in, the general response was laudatory. 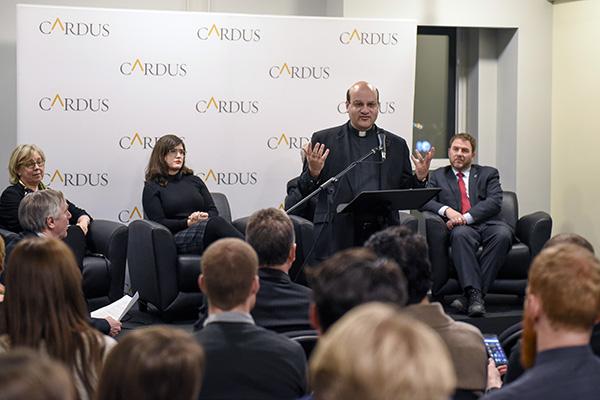 So what's so different about Rob Ford's drug usage?

I realize that his drug of choice is usually associated with those of a lower economic status, but surely we haven't degenerated into classist snobs that only tolerate the weed passed around at middle class parties?

The police carefully monitored Rob Ford for some months and did not charge him with any criminal matter related to his drug usage. Generally, this would at a minimum prompt an "innocent till proven guilty" attitude, if not an implicit endorsement for being so socially "with it." So why has Rob Ford's drug behaviour—leaving aside his demeanour—been so summarily convicted in the court of public opinion?

Speaking of the police, the media usually react with a very strong anti-police bias if evidence is made public but no charges are followed through. Privacy rights rank pretty high on the Canadian priority list. Yet, as Adrian Humphries pointed out in a National Post piece on November 15th, a 465-page police document prepared to justify a search of property of two other men mentions the name of Mr. Ford 2,049 times. The police chief holds a media conference and makes public "a deluge of salacious details" that have nothing to do with the search warrant in question. The police seem more effective in sharing personal information than they have in getting to the bottom of any crimes committed, but this has been the topic of only a few media tangent; hardly a prominent theme.

I understand that Mr. Ford is a holder of elected office, and this should require of him a higher standard. OK. Then let's compare Ford's treatment to that of a more sympathetic media figure. A few years back, no less an official than the President of the United States famously became engaged in sexual misconduct with a White House intern. Usually, when a CEO has sexual relations with someone who works within his organization, it is characterized as sexual harassment. Even when such relationships appear to be consensual, this impossible to confirm since since the person in the reporting position is always vulnerable to potential employment consequences.

So in the midst of the Ford firestorm, I recalled President Clinton's defence at the time that a sitting President should be immune from private law suits since it distracted him from his responsibilities. His detractors were portrayed as the prudes, mixing up their morality (remember the many less-than-flattering profiles of Special Prosecutor Kenneth Star) with the business of the nation. Compare the media and public conversations regarding Clinton and Ford, and the only logical conclusion is that we've since become a society of prudes, ready to impose our morality on those who lead us. Right?

Make no mistake—my own moral judgements are critical of the behaviours of Mssrs. Ford, Trudeau, and Clinton. Their admitted private behaviours are such that compromise their moral authority for leadership. If one takes seriously the criteria that our leaders be persons of character, expecting leaders who obey the law and reflect integrity ought to form part of our judgements. My opinion, for the little bit it's worth, is that we should aspire to leaders with higher standards.

When I read the Ford coverage, I might mistakenly believe the media agrees. A high moral bar is being raised—just this time—regarding private behaviour and the holding of public office.

In fact, I suggest that the casuistry, contradiction, and condescension with which this story has been covered is as much a moral outrage as the story itself.