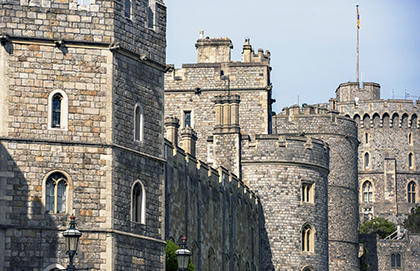 The Royal Family got a rude – but welcome – surprise on Wednesday. The Duke and Duchess of Sussex want out of royal life. They dropped this particular bombshell consulting neither the Queen nor the Prince of Wales, which seems rude. On the other hand, they weren’t able to discuss it over Christmas when the family gathers at Sandringham; Harry and Meghan and lil’ Archie skipped family Christmas for a trip to Canada instead.

Buckingham Palace, having read the news of the de facto ducal abdication along with everyone else, responded with a masterly English understatement: “It’s complicated.”

The Sussexes will withdraw from royal life and become celebrities doing good works. They will gallantly pay for this on their own dime. It will not be cheap, as they intend to live a climate-offending life on both sides of the Atlantic. Unlike Greta Thunberg, Grand Duchess of Clean Energy, they will not be bobbing across the Atlantic for weeks at a time in carbon-friendly, toilet-free watercraft. They will commute the old-fashioned way, showering carbon all over the Atlantic as the Queen goes to Balmoral where she takes long walks.

Money will not be a problem. Harry intends to keep the inheritance that his royal life delivered to him, and Meghan could presumably go back to acting. Both are sufficiently famous to make a living out of their fame. Instead of royal warrants – Weetabix, By Appointment to HM The Queen, Manufacturers of Breakfast Cereals – the Sussexes could do straight up endorsements, perhaps for Burger King or GoDaddy.

Since 1936, the dark memory of abdication has hung over the royal family; so much so that even the idea that Queen Elizabeth II would abdicate has been rejected as unthinkable. Who would have thought the de facto abdication would come neither from Elizabeth nor the heir, the Prince of Wales, but from her grandson?

The royal family can survive the checking-out of the sixth in line to the throne, the Duke of Sussex. Indeed, the eighth in line, Prince Andrew, Duke of York, checked out last month after keeping bad company – like Bill Clinton, he liked to gad about with the late Jeffrey Epstein and his coterie of allegedly sex-trafficked teenagers. Perhaps he got up to some very bad things himself. He categorically denies that.

Actually, the royal family will not simply survive the departure of Harry and Meghan; it will be better off without them. Harry conceived of his role not as a supporter of the good works of Her Majesty’s subjects, but as a creative source himself, something he picked up from his father. In choosing to marry Meghan, he opted to bring celebrity and novelty into the family, a dangerous combination for an institution that conveys tradition and stability.

As peerlessly admirable as the Queen has been, gloriously reigning 68 years next month, her family has been something of a shambles, seduced in succeeding generations by the twin temptations of indulgence and glamour.

The Queen’s uncle, David Windsor, took the regnal name of Edward VIII, but chose “the woman I love” over duty, and abdicated. The Queen’s sister, Princess Margaret, ran with the glamourous set in London, marrying the photographer Antony Armstrong-Jones after an ill-fated romance with a married man. She brought more grief than glamour as the years went on, as is always the case.

The Queen’s son and heir, Charles, and his wife Diana, embraced fully the world of celebrity. The subsequent War of the Waleses was occasioned by infidelity, driven by self-indulgence and pursued by scandal and gossip, each seeking to tear the other down as if by that they could bring themselves up. Instead, it only brought the monarchy to the brink. Only the untimely and tragic death of Diana, Princess of Wales, put an end to the strife within the royal family.

The most off-putting aspect of the War of Waleses, aside from the gross immorality of the principals, was, as the British put it, the whingeing, the infallible sign of self-indulgence. Both Charles and Diana felt so terribly sorry for themselves and wanted everyone to know how difficult it was for them. No stiff upper lip here. Only a sullen pout. Harry has picked up this unlovely trait from his parents, becoming something of a whinger himself.

Early on, Harry demonstrated that he did not wish to conform to the royal life, but make the royal life conform to him. This earns towering laudations from the press, which always appreciates novelty and disruption – in other words, news. But the royal life is one of conformity to enduring roles. There is room for individuality and adaptation, but it is the crown, not the one who wears it, that takes precedence.

The introduction of Meghan to the family was always going to be fraught. Grace Kelly married Prince Rainier of Monaco way back in 1956 and promptly retired from acting. Not even the intense desires of Alfred Hitchcock for her to return could entice her back; she was no longer an actress but a princess.

Trouble was coming for Harry and Meghan when the latter flew to Manhattan for a climate-unfriendly baby shower attended by her rich celebrity pals. She, like Harry’s late mother before her, violated the Moose-Jaw-over-Manhattan rule of monarchical movements. In the Queen’s long reign, she has been to Moose Jaw more often than Manhattan; duty before pleasure, service before indulgence. Diana wanted Manhattan, and certainly Harry and Meghan do, too.

That’s better for the gossip pages and the shows hosted by the likes of Ben Mulroney, husband of Meghan’s bestie and stylist, Jessica Mulroney. But it’s not good for the monarchy. The subjects are willing to concede the privileges of the royals, precisely because they understand  it means going to Moose Jaw for the sake of the people and the crown, not going to Manhattan to party with the indulgent set.

So it is better for both parties, the Sussexes and the royal family, for the former to take their distance from the latter. Eighty-four years after his great-great-uncle Edward VIII abdicated, Harry has decided he cannot continue without the lifestyle he loves. He will not be greatly missed.