“As a mother, I hope that I can reach other mothers. ‘You, as a mother, should know how this would feel for your own kids.’ If we can find common ground on that, we can start from there.”

Nora Chénier-Jones is a black Canadian who was born and raised in Outremont and now is raising her own children in the borough. Wanting to find ways in which to nurture empathy prompted her to co-found Pluralisme Outremont, a group promoting an appreciation of diversity in Outremont’s schools, with her friend Jennifer Dorner and others.

Nora grew up on a cul-de-sac that her family shared with several Orthodox Jewish families, and their children were her playmates. She has good memories of her childhood years.

“There was the freedom of being able to just play, not always having someone hovering over us,” she recalls.

Nora feels Outremont is still like that, which is why she moved back there with her own children.

“Kids play in the alleys with different other kids, like Orthodox Jewish kids, kids from other cultural backgrounds, and we’re not really hovering over them. So there’s that freedom … a little bit? The neighbourhood is safe.”

It is no surprise that Nora and her partner, Shawn Bowen, run Vida Sana, a gym and open play space for families. As parents to five children, they value a physically active life for their own and other families. 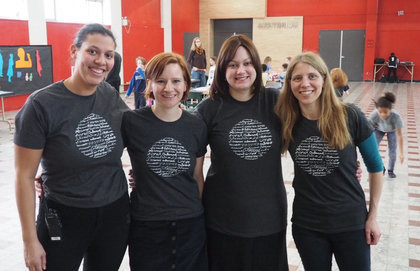 Reaching our Mothers
Pure laine and Purim
Christ's Hope in the Wounds of the Rohingya
We moved here because our children were starting school. We love the neighbourhood. The trees. The whole vibe here. The children playing together on the streets, feeling safe.

Unlike Nora, Jennifer Dorner is new to Outremont, having moved to the borough with her husband, an artist like her, and children about two years ago.

“We moved here because our children were starting school. We love the neighbourhood. The trees. The whole vibe here. The children playing together on the streets, feeling safe. And the schools are beautiful. We really liked the fact Outremont schools value the arts: their programs fit with what we value. The school our children go to has a theatre program, so they are taking drama classes from kindergarten.”

Yet a few experiences with regard to the treatment of diversity in these communities that disappointed them and a desire to “encourage, facilitate, and create interaction to promote respectful understanding among the diverse people who make up our school communities” (the mission of Pluralisme Outremont) prompted Nora, Jennifer, and their friends to organize “La route vers la liberté/Can you get to freedom,” a family-friendly all-day event on a Sunday during Black History Month.

Using arts, crafts, music, short animated films, and other activities, they worked to ‘inspire families to learn and celebrate black history and culture from a Quebec perspective.” They are excited about having received support from the local school board and being allowed to use the facilities of the local high school for the event. They hope that these kinds of learning experiences can eventually become a regular part of the curriculum in Outremont schools.

“It went really well, and it was a really busy day – we were on our feet, running around the whole time from 10 am to 3pm. A lot of people came early on and stayed, and then a lot of people also came later on,” Jennifer and Nora told me.

“People were laughing and smiling. The idea was to create a platform where people could have conversations and get to know each other, so that people who know nothing about black history – which I’m afraid is a large percentage of the people who live here – would be introduced to the culture. Not just black history, but also black popular culture. We focused on Canada, and Quebec specifically. And we had a playlist of all Canadian black artists playing throughout the day – it is a good playlist!”

When it came to another aspect of pluralism in Outremont – the borough’s ban on new places of worship – Nora took a long time to make her mind up about the issue.

“It’s not that I think the Hasidic community should not have synagogues. I just wasn’t sure about synagogues on Bernard Avenue. And because I took a long time to take a stance on this issue I was called a bigot and a racist. I don’t think so. I think people can take time to make decisions without being racist. I’m not someone who would say something spontaneously. I like to think about my answer before I say anything.”

“I think people just need to learn more about each other,” says Jennifer. “And so creating conversations, and creating spaces for these conversations to happen, is what we’re trying to do. But I don’t know how much change we will see in five or 10 years.”

“And this is why we are trying to work with schools,” says Nora, “to reach kids at a young age.”