Leonardo da Vinci was a master of perspective. So Walter Isaacson, American journalist and author of a 2017 da Vinci biography, reminds us in his entry for the Washington Post. Isaacson reflects on the recent record-shattering $450 million sale of da Vinci’s Salvator Mundi or “Saviour of the world,”

Leonardo combined optics with perspective to convey a three-dimensional image on a two-dimensional panel. This ability to “make a flat surface display a body as if modeled and separated from this plane,” [Leonardo] said, was “the first intention of the painter.”

Isaacson goes on to describe Leonardo’s long treatise on perspective, where he melded his love for scientific inquiry with a passion for artistic representation. In Salvator Mundi, for example, Leonardo gives Jesus’ right hand of blessing sharper definition than the rest of the painting. Because objects two or three feet away from our eyes appear more sharply delineated, Christ’s hand appears to be reaching out of the painting towards us.

Leonardo’s depiction of Jesus is precisely what he might have looked for in a worldly Saviour. Teaching a recent college-level course on Belonging and the Body, I asked my students what they saw in Leonardo’s Christ. It is an almost-androgynous figure who peers out of the painting towards us, his eyes following us mysteriously. Not confined to bodily expectations of gender identity, his hair flows over his shoulders in luxurious curls.

My students couldn’t decide if he had facial stubble or a beard. A haze cloaks his chin where facial hair might be. We see no marks of impairment or disability, such as nail-marks on his hands. No injury mars his decidedly pale complexion. Christ’s richly ornamented clothing demonstrates opulence and regality, power and privilege. It is apparent that Leonardo’s Christ need not worry about where he will obtain his next meal.

Perhaps the crystal ball in Christ’s left hand, symbolizing the world, presents us with a microcosm of Leonardo’s Christ. Elegant and priceless, this crystal barely diffracts light in its purity and transparency. Freed, as it were, from the confines of limited materiality in its idealized and ethereal state.

The flawless, almost divinely beautiful face that emerges mysteriously from the deepest of shadows, the almost supernaturally penetrating eyes which convey an overwhelming psychological, emotional and spiritual profundity, have no parallels in Western painting until the creation of Mona Lisa and the St. John the Baptist.

In encountering and befriending others who experience the world differently, we ‘welcome the stranger’ in them.
Related Stories 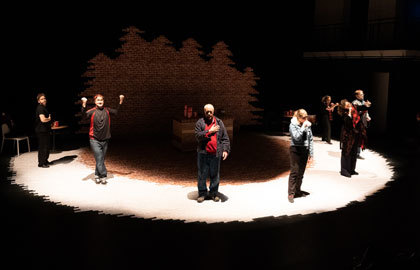 The sale of da Vinci’s work for such a vast sum should cause us to pause and reflect on our expectations for a Saviour. It is apparent that da Vinci’s painting resonates with ideals that many in modern Western society share. This Christ reflects our Eurocentric, beauty-obsessed preferences. One might argue that it is not God become human, but a demigod created in our image. The image, that is, of those with power, privilege, and the wealth to determine societal norms and idealistic standards.

While Salvator Mundi does not contain traditional indications of divinity, such as a halo, the embodied form of Christ barely hangs onto the limits we experience as human beings. It is a glorified body that perhaps does not save the world, so much as relegate all other bodies to the domain of imperfection.

Da Vinci’s Salvator Mundi stands in sharp contrast to the portrait of Jesus from Popular Mechanics’ article The Real Face of Jesus in 2015. Mike Fillion reported from the field of forensic anthropology how British scientists, assisted by Israeli archaeologists, predicted Jesus might have looked. The face that gazes out from the page is not like many, if any, depictions of the Son of God found in Western art.

It is somewhat unremarkable, although decidedly Jewish and Middle-Eastern. The eyes reflect curiousity or astonishment more than stateliness and wisdom. The mouth neither smiles with profound and endless love nor is it pursed as though set to take on the world. It is a face that has no beauty that we should desire it, no form or majesty that would cause us to take a second look. It is certainly not a face that we would pay good money to behold, except perhaps as an oddity.

Alison Galloway, professor of anthropology at the University of California in Santa Cruz, is quick to point out that forensic depictions are by no means an exact science. Despite this warning, she says, "This is probably a lot closer to the truth than the work of many great masters."

Da Vinci may have been a master of artistic perspective and the physics and science of sight, yet he is shortsighted when it comes to the projections and prejudices that many of us share. We create saviours of the world in our own image, in our likeness yet without our embodied physical limitations. It is no wonder that Christ constantly sought those with eyes to see and ears to hear him.

The strength of this metaphor lies in the subversion of our expectations. It was often those who were blind, sick, or otherwise limited in their bodies who were open to receiving the Good News of Christ. Yes, he may have healed them, but the true power of their encounters with Christ lay in his radical affirmation of their value and worth in God’s kingdom, in contrast to the isolation and ostracization they experienced in their communities.

In my work with Christian Horizons (www.christian-horizons.org) I have witnessed the tragic ramifications of our quest for ideal bodies and minds. Walking alongside people with developmental disabilities, people from the community will often avoid conversations altogether rather than engage with someone with limited intellectual capabilities. Alternately, when the people I supported were spoken to, it was often as though they were only able to receive charity or pity. In contrast, I had come to know these people as generous, thoughtful, unique, and often hilarious friends who have a great deal to contribute to the world in which we live.

Thankfully, I have also seen instances where communities – faith communities in particular – have wrapped themselves around people with intellectual disabilities. They have taken the time to get to know them in their unique embodiment, welcomed them into contributing roles within the community, and in turn, have experienced flourishing together in unexpected and remarkable ways.

One of the unexpected ways we may be freed to flourish lies in our relation to bodies. In encountering and befriending others who experience the world differently, we ‘welcome the stranger’ in them. As we become comfortable with our strange friends, we open to the possibility of welcoming the stranger in ourselves. We begin to recognize and perhaps even embrace our limits. We learn to rest in our humanity, to accept our bodies, and to be at peace with the place in which we find ourselves in the world. As our perspective shifts, we learn to recognize ourselves from the inside out, rather than attempting to conform ourselves from the outside in. Ironically, da Vinci’s “saviour” represents the unattainable ideals and bodily expectations from which we need saving, for our communities to heal.

Right before Christmas, perhaps we might consider more deeply what it means for the Word to become flesh. The Incarnation doesn’t transform our limited bodies into resurrected demigods. As Nancy Eiseland provokingly reminds us in The Disabled God, Christ continues to bear the marks of his impairment when he returns from the grave. Rather, the Incarnation is the event by which Christ becomes Emmanuel, “God-with-us” in the midst of our experiences of bodily limitations and fragility.

Da Vinci’s idealism is perhaps best observed in his sketches of The Vitruvian Man. Perfectly proportional, drawn within both a circle and a square, Leonardo bases this diagram on the correlations of human proportions as described by the Roman architect Vitruvius. According to Vitruvius, the ideal human body should be eight heads high. In contrast, Christian doctrine understands that God outlined his proportions in the unassuming and unremarkable flesh of Jesus of Nazareth. In turn, the Body of Christ takes on flesh in the incredible diversity of his followers, in all of our embodiments and limitations. What might it look like to shift our perspective from unattainable ideals of the human body to perceiving the unique and intricate beauty of everybody created in God’s image? Therein lies the true masterpiece.

Whether hoax or healing, when the face of Jesus appears on the side of a Tim Hortons, one play holds up the unavoidable questions evoked by quotidian miracles.

Recently, the Gerber baby food company chose a child with Down syndrome as its “spokesbaby.”  But as Keith Dow of Christian Horizons asks, while the winner’s extra chromosome paints an adorable picture for disability advocacy, will the small step begin a journey of lasting social change?