As startling as the idea of transgenderism is to many, even more startling is the totalitarian nature of its claims.

The nature of these claims, though, make sense against the background of modern philosophy, roughly from Descartes to Marx, which rejects the notion that we can have real knowledge of "the world as it is". Knowledge, instead, is developed and guided by universal Spirit, or class consciousness; to disagree is to be irrational as rationality is redefined.

Such an approach is empirically flawed and even dangerous. Philosophy needs to rediscover reality to provide a solid basis for society to understand human nature and flourishing, and for honest dialogue to occur about these things.

Transgenderism, then, is the perfect child of modern philosophy in that it is detached from reality and springs forth from the enlightened guidance of our modern philosopher-kings. And it is not true.

The word “modern” in philosophy refers to the period from roughly the 16th century to the mid-20th century.  It starts with René Descartes’ inward turn.  He and his fellow Rationalists thought that since our senses can deceive us, true knowledge needs to start with clear and distinct ideas that are self-evidently true, without any experience or recourse to the external world. Against that proposal, (mostly British) Empiricism taught that all that we could have sure knowledge of would be sense data, which seem to impose themselves on us. Concepts such as “thing”, “self”, “causality”, etc., are secondary, and not given to us in sense data; hence these concepts do not represent knowledge we can trust.

Immanuel Kant resolved these two schools of thought with his “transcendental categories.” We don’t perceive “things in themselves” (“the world as it really is”). Rather, our knowledge is always and already formed by mental structures, that is by transcendental categories such as “unity (thing)”, “causality”, “number”, etc. Real knowledge, for Kant, is knowledge of our thoughts. “The world as it is” is unknowable except as the result of analysis.

Hegel said “if we can’t know the thing in itself, what sense does it make to say that it exists?” and so “the world as it is” became the world of our perception of things. Universal Spirit, or mind, is the “background” to our own individuations of reality, moving us forward in an eternal back-and-forth of thesis-antithesis-synthesis.  This leads not to relativism, or “reality as I see it,” but to a very constitution of reality, changing over time, always “bigger” than us. Truth grows and changes; what is true today might not be true tomorrow.

Marx interpreted this universal Spirit, the force moving reality forward as discerned in the scientific study of history, as the developing consciousness of the working class, or the Party. Trotsky said: “I know that one must not be right against the Party. One can be right only with the Party, and through the Party, for history has created no other road for the realization of what is right.” The Party, through the scientific study of history, comes to understand structures of reality, and therefore enables itself to be the organ through which truth and development occur.

Much of what is called “post-modern philosophy”, especially in Continental Europe, analyzes language as the primary “locus” of knowledge, and so by “deconstructing” language, gives unspoken voices the opportunity to be heard.

The notion that the Party determines the way forward, which is the “realization of what is right,” has been very influential in the past century, especially in European universities. Critical theory (or Cultural Marxism if you prefer), often associated with the Frankfurt School, has been the source of new academic fields, and many university departments with the word “studies” in their title. The empowerment of formerly oppressed or overlooked political groups – women, colonized peoples, Latin Americans, LGBT people, Asian people, people of color – breaks the stranglehold of the patriarchal capitalist (today we might say cis-hetero-normative) class that created truth in the past. 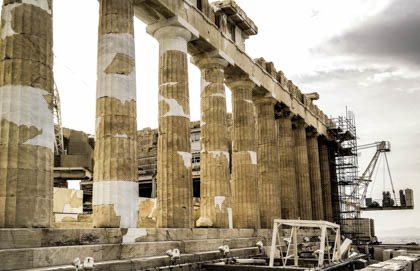 Marxism takes this notion of the Party being the guardian and father of truth seriously. Mao Tse-Tung ordered workers in the fields to plant three grains of rice where they used to plant one, to triple production. This was not based on advances in agriculture, but on the projections of the Chinese Communist Party. Predictably, most of the rice died because it was too crowded, and millions died of malnutrition and starvation as a result.

Stalin promoted “Lysenkoism”, a theory of biology that denounced Darwinian evolution and genetics as bourgeois and counter-revolutionary. He was thoroughly convinced that the Party, as discoverer and guarantor of the truth, had more to say about biology than could be affirmed by actual scientific research. In fact, hundreds of scientists were imprisoned or exiled for teaching real science as opposed to the “science of the people”. Opposition to Soviet Communism as taught by the Party indicated serious irrationality. For decades, the Soviet Union hospitalized political dissidents as psychiatric patients. Those who disagreed with the Party were at best mentally ill.

Today’s gender ideology is based on the same philosophical underpinnings, with the same totalitarian impulses. This is not to deny that real human beings have real, often painful, things to deal with in their lives.  Medical science has some experience with this, but gender ideology advances as if science has nothing to say about it.

Martin Heidegger said that philosophy had lost touch with “being”, after classical Greek philosophy. Gender theory and all the other children of “critical studies” are almost predictable outcomes of the “out-of-touch-with-being-ness” of modern philosophy. Gender theory demonstrates this fatal flaw with the assumption that “gender” is separate from sex, that biology has nothing to do with our humanity, and that medical science and experience with the people presenting concerns is irrelevant.

It has been said that history is written by the victors. Women have rarely been represented in history or allowed to speak for themselves. Accounts of slavery written from the perspective of the white European or American capitalist, whether he is buying and selling slaves, or trying to emancipate them, leave out a major segment of those accounts, namely the slaves.

Much of what is called “post-modern philosophy”, especially in Continental Europe, analyzes language as the primary “locus” of knowledge, and so by “deconstructing” language, gives unspoken voices the opportunity to be heard. Critical Marxism, as critical, presents new truths; as Marxist it makes claims about the reality of those truths. These new stories don’t just add to, or modify, or replace the old stories. They constitute the new truth, the new rationality.

The intention here isn’t to deny the voices of those who feel there is something wrong, or something different, or something to be addressed. It is to protect those voices from deformation by ideology that is baseless, foreign to human experience, and dangerous to human flourishing. If the Christian Church, in particular, and the Catholic Church specifically, wishes to engage in dialogue with the trans community, the Church needs to understand thoroughly the nature of the claims of its interlocutor, and perhaps rediscover the nature of its own claims. Neither partner in such a proposed dialogue is simply dealing with a list of sins and demands. Clear distinctions between needs and claims will help clarify the distinction between evangelization and pastoral care. Trans Christians, Trans Catholics, just like every other Christian/Catholic, require and deserve the administration of the pastoral care of the Church to help them achieve the end for which they were created.

Left to itself, science produces wonderful results, but without a solid philosophical understanding of why it works, it will be susceptible to the inroads of Party thinking.

But the truth remains that gender ideology as ideology is harmful to human flourishing. The correct response is not to react to one or the other facet of it. This ideology is not at heart interested in classical rationality or the classical search for truth. In fact, gender ideology does not directly call for an immediate response. Rather, it forces us to realize that the western intellectual project of the past several centuries, which produced modern science, has come to a philosophical dead end, or at least that this public and powerful manifestation of it has. The counter position will have to be based on a philosophical understanding of reality, something that human beings can grasp and know.

Walter Burghardt SJ described contemplation as “a long loving look at the really real”. Believers believe that we can truly come to know the really real. We could make this more accessible perhaps for philosophers by changing it slightly to “a long intentional understanding of the really real” (or the “truly concrete”, a phrase used by Bernard Lonergan SJ who did not like the description “transcendental Thomist” for his thought). We might have to reconsider metaphysics, but Aristotle started with the experience of intellection and deduced that objects had intelligible forms because they were intelligible by an intelligent agent. Metaphysics will not separate us from true knowledge of real things.

Gender ideology has a clear strong institutional hold on universities. The most outrageous claims can now be justified by “peer-reviewed research”, which generally consists of pulling itself up by its bootstraps. The totalitarian nature of this ideology has run up against the ramparts of science, but science is under siege.

“How to Titrate like a Feminist” was the title of a workshop for women in science put on by a member of the sociology department of a university I know. Left to itself, science produces wonderful results, but without a solid philosophical understanding of why it works, it will be susceptible to the inroads of Party thinking. Science, critical thinking, even the most anti-theistic writers today, ignore Party thinking at their own peril.  The good of society – public policy, evidence-based decision-making – depend on a public arena of intelligent rational discourse, and this is at risk.

A philosophy based on the “really real” would enable us to make reasonable statements about topics such as men and women, or biology and human nature, as much as about physics and the nature of the universe. Science need not fear theistic fellow travellers, nor does critical thinking in the humanities. Faith in a God who is Himself reasonable and who creates a reasonable universe, and who made us rational so that we can really understand the universe we are part of, does not limit our intellect, but points it in a correct and essential direction. It would be ironic to some, and satisfying to others, if the Catholic Church were the last true ally and proponent of the humanitarian and rational project of the Enlightenment.

The dead ends of post-Enlightenment philosophies, Richard Bastien argues, are truly openings for rediscovering the symbiotic relationship between faith and reason

Data unearthed by the Cardus Religious Schools Initiative at the University of Notre Dame debunk popular caricatures of religious schools as sinkholes of anti-science obscurantism.

The Grim Pill of Progress