A professor of mine once opined that economics is a matter of scarcity: How do we distribute resources that are finite?

Regardless of whether all economists would agree with my professor’s statement, during this time of ours that has been marked by the COVID-19 pandemic, we can agree that scarcity has confronted us in a new, stark way.

Hospitals, care homes, and other essential services desperately try to maintain staffing levels. Industry races to manufacture life-saving equipment and protective gear. Neighbours, colleagues, friends and families long for the everyday, face-to-face interactions that we so often took for granted.

Scarcity, as a brute fact, can be jarring enough. When the fact transforms into mindset, it can breed competition, desperation, and even hopelessness.

I expected to find myself immersed in such a mindset when I began working at a men’s shelter in Vancouver just before the start of Lent. After all, a person does not usually walk through the doors of a shelter unless he or she is experiencing scarcity of some kind or another, whether it be of housing, work, or a safety net of social relationships. 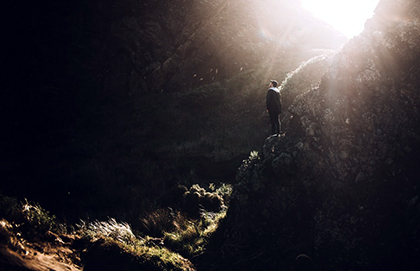 I particularly feared confrontation with scarcity at mealtimes, when I was occasionally tasked with distributing food to a room full of hungry men who had spent the day hard at work, walking the streets, or waiting for shelter.

This was especially true on the night, during the first week of Lent, when the dinner to be served was barbeque pork chops and potatoes. My friendly smile hid my anxiousness as I counted the dwindling number of remaining pork chops and peered out at the still lengthy line of men awaiting their meal. What kind of mutiny would ensue if we ran out? After all, if I had not had a good meal all day, being told “we’re out” would likely result in more than a little frustration and anger.

To my relief, we had enough pork chops for everyone, and once the last juicy cut of meat had been distributed, I began to hastily stack the empty pans on a cart, ready to retreat to the dish room.

Before I could discreetly wheel the cart away, one of the guests noticed that the pans weren’t completely empty. There was a thick layer of leftover gravy lining the bottom of the pans. He asked if he could take one and scrape off the remaining gravy.

What happened next transformed my exhausted nervousness into delight.

Rather than just taking some extra gravy for himself and returning the pan, as I had expected, he began to cheerfully walk around the room, declaring, “Gravy! Gravy!” and doling out the delicious excess onto the plates of his fellow guests. I detected more than a few smiles all around as the men received the rich mix of juices and barbeque sauce onto their plates.

What that one perceptive and generous guest did in the presence of his brethren was no less than the action of Christ himself, of whom we are all members. He took a sign of scarcity, a stack of empty pans, and took the drippings, the waste, and transformed it into the sign and substance of abundance. He declared that man is not made solely to be nourished for his bare survival: man is made to joyfully draw water (or sometimes gravy!) from the springs of salvation, even if those springs have the appearance of a stack of dirty dishes.

This man’s action of fraternal generosity was a needed reminder for me that in times such as these, when we find ourselves scraping by on leftover money, energy, or love, it’s Jesus who looks at the bottom of the pan and pours rich gravy for us...who anoints our head with oil, who pours our cup to overflowing.

Perhaps it is scandalous to so lavishly write about abundance when so many of us face the bleak realities of deprivation and loss. But this is the same scandalous liberality with which Christ confronted his own impending death. Sometimes, the fear and trembling must come, as it did for Jesus as he wept in the garden. But before the hour when darkness reigns, Jesus reminded us that friendship and joy are the alpha and the omega, when he broke bread and shared wine with his friends in the upper room. He reminds us that even when night seems to befall us from all sides, the light of God’s grace, God’s abundant love, still remains.

There’s been times during the past few months which I’ve doubted the existence of grace. In riding a nearly empty bus home, passing by so many more men and women asleep on sidewalks and in doorways, draped in worn blankets and shadows, I have sometimes felt like uttering the desolate cry of Christ on the cross, “my God, my God, why have you forsaken us?” or even more temptingly, the declaration of Nietzsche, “God is dead.”

It is from the depth of these doubts that God raises up the Good News proclaimed by the Church, even when it has appeared to be silenced. When we gather this Easter with those we love or have been forced to love through our involuntary confinement together, to break bread together in our homes, to break open the Word that spans all time and distance and will bring us all together again, we declare that even if God appears locked away in the tomb, God is not dead, God has not forsaken his people, God is alive and continues to dine with us, drizzling the gravy and gracing us with his presence.

Fear may seem as prevalent as the COVID-19 virus during this difficult time. But trusting that good can come from that which we can’t control might be the hopeful antidote we need, writes Nolan Toscano.

From time to time, Publisher Peter Stockland will bring Convivium readers an in-between-the-lines reading of the week's past headlines. Read for a glimpse into the subtext of our latest media roundup.

Father Raymond de Souza travels to Rome for the canonization of Pope Paul VI, which he notes is part of a 21st century uptick in papal sainthoods.