Formally educated as an "all-math, all-science all the time" kind of kid from Grade 1 on, I started smuggling Homer, Goethe and Nietzsche into my backpack towards the end of high school to keep me alive during calculus. Mostly by default, I enrolled in a program in chemical engineering at McMaster University. It seemed like the thing I was supposed to do. Halfway through, though, in the arrogance and impetuousness of youth, finding my studies insufficiently challenging and a little bit soul crushing, I put away my differential equations and heat transfer coefficients and dove into a double major in philosophy and political science. Luckily, at a time in my life when I sorely needed good counsel but barely realized it and wouldn't have admitted it, I enrolled in classes taught by the Ajzenstats, Sam and Janet. In the years since, to my good fortune, the Ajzenstats became my mentors and friends.

During the past couple of years, Janet has received several notable awards and honours, from her professional peers in political science as well as from the Queen herself, in recognition of her indefatigable dedication to correcting misrepresentations of Canada's founding and to defending our political institutions. Meanwhile, Sam found himself hospitalized following a debilitating stroke in March 2012, one that largely deprived him of bodily mobility. Thankfully, his dexterity of mind remaining intact, I was able to visit him occasionally and engage him in conversation on many subjects, from education to film and theatre to various topics in the history of ideas. Sam passed away on September 26, 2013, leaving countless conversations with his friends incomplete—but that is only as befits the nature of philosophy, not to mention life itself, as Sam himself would have affirmed.

Samuel Ajzenstat personified the philosopher's variants of the virtues. He was courageous in pursuit of the truth, following wherever the logos may lead. He was even-tempered and even-handed, and he could adjust the expression of his ideas to fit his audience or interlocutor. While philosophizing, he put his sense of wonder on display and inspired the same in others, but when giving personal advice or evaluating the practical application of abstract principles, he was a counsellor of prudence. More than once, I heard him recommend that sleeping dogs should be left lying. In my last conversation with him, I described how I understand Hobbes' teaching as one that would convince us to treat our ideas and actions as so insignificant that we ought never insist on them, whereas our appetites should be reckoned as so significant that we ought to insist that society should be arranged so as to assist us in the satisfaction of every one, provided they're harmless enough. Sam not only remarked that this was a fine interpretation of Hobbes, but he further admonished me to acknowledge that, when compared with the alternatives, Hobbes' recommendations aren't all that bad, all things considered. Agreed.

Sam was a man of hope and faith, too, although his differed from mine. His manner of raising questions that implied objections demonstrated that it is possible to show respect while issuing subtle personal challenges, eschewing the sort of phony sensitivity or facile ecumenism that ultimately disrespects diverse traditions and commitments. 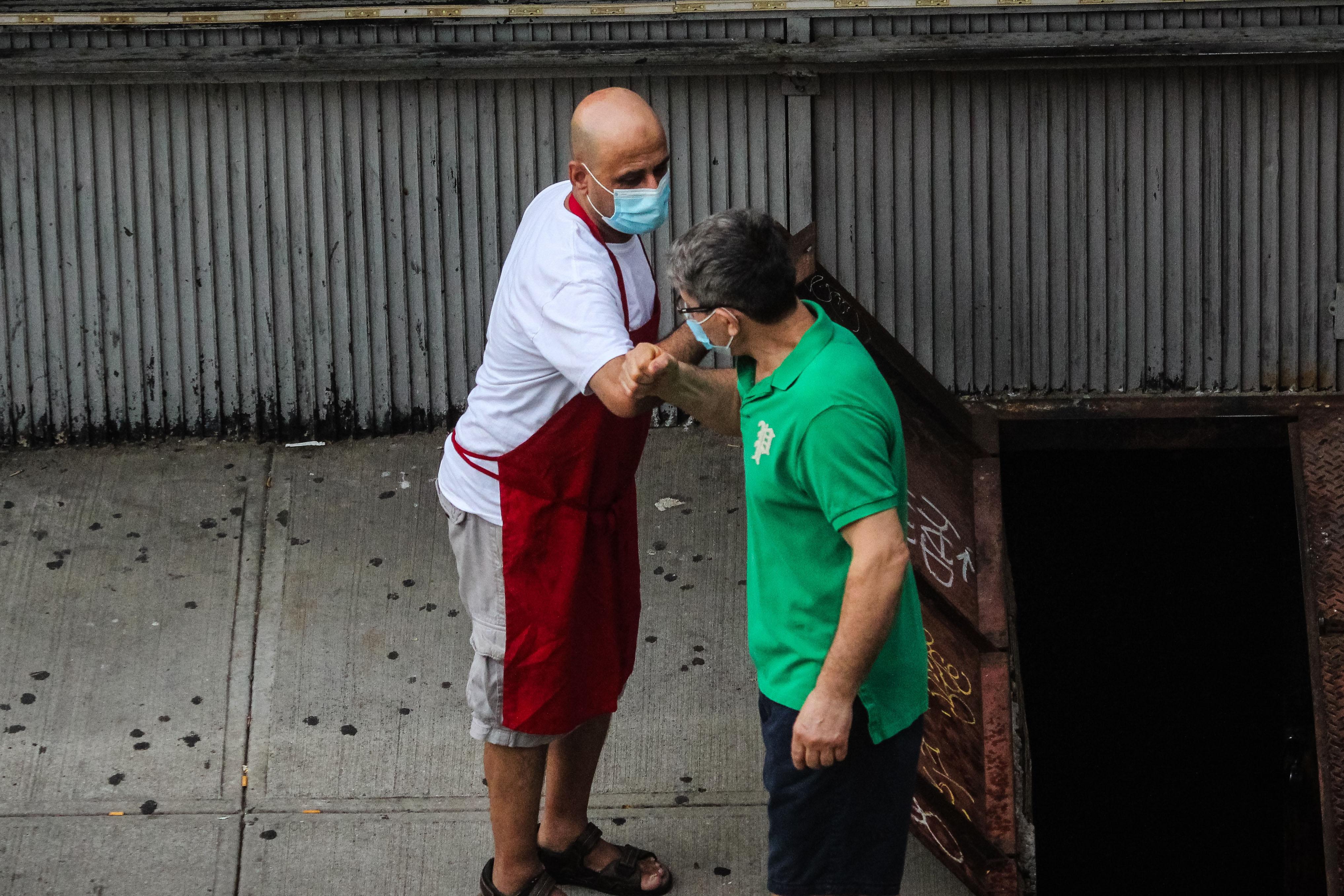 I experienced Sam's patience and generosity in the way that he never made me feel as ignorant as I undoubtedly was (or am) regarding subjects he understood much better than I. He never castigated, but you could tell when he was insufficiently impressed by some position. Even then, he would usually prod you to clarify, elaborate further and rethink things. Should Sam find your observations interesting or your arguments compelling, he would say "I like that" in an understated fashion that reminded me of Johnny Carson's "good stuff." It was also from Sam (and Janet, together) that I learned the rhetorical strategy of motivating someone to become better than he is by praising him more than he deserves so that he will want to live up to the image of himself apparently held by people he esteems.

Sam also exemplified hospitality, which Kant identified as the cosmopolitan virtue, whether in his book-lined office, his book-lined home, or his hospital room. Regarding his gentlemanly qualities, I will never forget the time when a classmate of mine, standing in line with me to get lunch one day, went on and on about how "cute" Professor Ajzenstat is. He was standing right behind her. I knew it. She didn't. And he acted like he didn't hear a thing.

In the classroom, Sam could spend half of the semester offering running commentary on just a handful of pages from some philosophical work, examining it from all angles, considering the myriad possibilities that each word contains. It was philosophy as midrash, although that was a word I didn't know then. I had the benefit of hearing him lecture on Kant, Hegel, Kierkegaard and Nietzsche. Sam's written work tended to be similarly exploratory, allowing his arguments to emerge in a fashion that led the reader to anticipate them rather than be assaulted by them. In an age of ideology such as our own, too many doctors of philosophy tend to oversimplify things and straightforwardly apply prefabricated conceptual frameworks so as to draw pre-ordained conclusions and issue calls for action in the service of pre-philosophical agendas, all couched in impenetrable prose filled with jargon intended to obscure and impress. In contrast, I remember how Sam described to me his own methodology after he gave a presentation on The Merchant of Venice at the 2011 Civitas conference (which was exactly as unlikely and needful as it sounds). It goes like this: "I read something, and then I think about it."

On the subject of Shakespeare, Sam shared with me in the hallways of St. Peter's one day his argument for an article on Coriolanus that will, unfortunately, remain unfinished. It dealt with the problem of the motivations of great men in democratic circumstances. He was interested in the tensions that must arise when an individual concerned with the noble and the honourable finds himself in a society that defines what is noble strictly in terms of service to the many (i.e., the base). It is, we agreed, not a concern without contemporary relevance.

The only time I ever heard Janet say something critical of Sam was when she once complained that he doesn't publish enough, claiming that he is probably the best unknown Kant scholar around. Sam helped me to understand Kant as recognizing that modern man stands on the brink of a nihilistic abyss, and in searching for a way to prevent our tumbling down, down, down, he articulates a realistic idealism and enlightened optimism that is as rhetorical as it is rational—which is to say, he thinks that we need to persuade ourselves of it for goodness' sake. On the one hand, Kantian moral theory only makes sense in the context of Kantian metaphysics. It is premised on an if and not an is (viz. if we are to be understood as free, then it could only be if… and decidedly not we are free when…). Those who would try to salvage the essence of his moral doctrine while jettisoning the metaphysical worldview underlying its conjecture are what I call Second Critique Kantians. They are analogous to Second Tablet Jews and Christians, themselves difficult to distinguish from ordinary secular humanists. They want to maintain the value of a secularized version of Biblical morality without taking the first of so many Commandments seriously anymore, having made idols out of reason and sentiment unaided by revelation but then finding themselves desperate to sustain some sense of meaning and significance in life that sentimental reason alone struggles to provide. On the other hand, Sam also helped me to see that maybe it does not really matter so much if Kantian autonomy is fanciful rather than noumenal (Kant's fancy word for really real). Heeding Kantian morality may be kind of all right, except when the consequences of doing so are too dire. Or perhaps, at least, Kantian morality is not something to discourage in others who need something to give them a sense of purpose and a moral compass.

Setting intellectual antinomies aside, I would maintain that someone qualifies as a great teacher if they lead you to appreciate just one basic truth. In my life, I credit Samuel Ajzenstat for helping me to see, in the midst of a series of lectures on some small fraction of either/or, that when it comes to human relations, love is better understood in terms of doing-for-others than as a matter of feelings-within-oneself. Only then can you still love even when you don't feel like it or aren't particularly fond of whomever it is you must deal with. This was not obvious to a 21-year-old socialized within a late 20th century Canadian ethos, too susceptible to anger and pride and suffering from the disorders that attend youthful romances, but it was an epiphany to me then; and now that I am older, a family man, a teacher and a community member, it is something I am reminded of and remind myself of regularly. I remain forever grateful to Sam for bringing it to light.

In these days of pandemic disorientation and fatigue, uncertainty over the right thing is all right but failure to be good neighbours will be more toxic than the disease itself, Travis Smith writes.