Maria Mourani, a well-known Catholic member of Parliament (MP) from Quebec, wasn't exactly a household name when she broke ranks with the Bloc Québécois over Quebec's Charter of Values, exposing fault lines in Quebec society. While many secular Quebecers see it as a long overdue statement of the neutrality of the State in religious matters, faith groups and cultural minorities have rejected it as yet more proof of the politics of exclusion in Quebec.

Mourani's spirited defence of the rights of Quebec citizens who work in the public sector to garb themselves in a manner signifying their religious heritage—if they so choose—has put her on the map of Canadian politics. (She was famously photographed wearing a gold cross when she came out against the Quebec Charter of Values.)

The feisty MP, who now sits as an Independent for Montreal riding of Ahuntsic, has recently sworn off her allegiance to Quebec separatism in favour of supporting Canadian federalism, saying that the Canadian Charter of Rights and Freedoms offers the best protection for all Quebecers, regardless of their creed or culture.

It's perhaps no surprise then that she's at the helm of another crusade: the fight against human trafficking, which Irwin Cotler, a prominent human rights lawyer and MP for the Quebec riding of Mount Royal has called "one of the most pernicious, persistent and pervasive assaults on human rights."

According to a Criminal Intelligence Service Canada 2008 report, domestic sex traffickers such as pimps can earn $280,000 annually, making tackling the problem of prostitution an "enormous battle" requiring "political courage." Mourani has asked her colleagues in Parliament to think long and hard about what kind of society they want their children to grow up in, for the question of whether we want to legalize prostitution in this country is now upon us: The Supreme Court of Canada has struck down the remaining provisions of the law on prostitution in Bedford v. Canada. Although prostitution itself (i.e., the purchase of sexual services) is not illegal, various practices associated with it are. The reasons given for the Court's decision rest on the view that this discrepancy increases the risks for sex-trade workers. So, the highest court in the land has given the Canadian government a year to come up with a new law or let the decision stand, effectively decriminalizing all aspects of prostitution.

Like many contemporary Catholics, Mourani doesn't wear her religious beliefs on her sleeve. Nevertheless, her faith in social justice as an ultimate standard of good corresponds to a spiritual understanding that prostitution is ethically wrong, not for reasons of prudishness but because human beings aren't chattel and are all equal—a position she says she would defend even if she did not believe in God.

Her view that it is wrong to reduce any human being to a mere instrument for the paid pleasure of others maps the terrain of a felt understanding. This is evident when she describes the obstacle course faced by a female MP in France who is fighting to criminalize the purchase of sexual services, as is currently happening in Sweden and Norway. 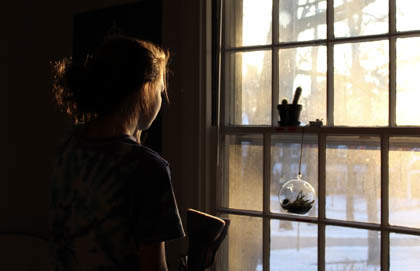 Incredibly enough, after the fight began in France, hundreds of men signed a petition in which they claimed the right to purchase sexual services. The petition was titled "Hands Off My Whore," and the petitioners included writers, actors, a lawyer, a journalist and many others. These were well-connected men of power and influence, not poor, sexually deprived men or social outcasts, as apologists would have it. Mourani says that this shows "the real face of prostitution in France."

"I believe that prostitution is not a job but rather a form of violence against women," Mourani has said. She sees prostitution as a system of exploitation set up by men and believes that legalizing it means that all women can be prostituted, a view that neatly corresponds to a secular feminist view of the issue. In her view, the "johns" who go to prostitutes aren't "clients," as they are referred to by advocates of the sex trade. Rather, they are people who use prostitutes, and they are just as responsible as the pimps for an exploitative system that has led to a constant and significant increase in human trafficking and child prostitution in Europe.

Bill C-452 has received the unanimous support of the House of Commons—no mean feat for a private member's bill—and is now en route to the Senate, where it will become law. The legislation will give more effective tools to police and prosecutors to fight human trafficking and protect vulnerable people from sexual exploitation while providing consecutive sentences for offences related to human trafficking.

Joy Smith, a Conservative MP who represents the riding of Kildonan—St. Paul, in Manitoba, has been helping Mourani shepherd her bill through the often fractious debates of Parliament. She is well positioned to do so given that she sponsored her own bill against human trafficking. In 2010, Bill C-268 was enacted, introducing a new offence of trafficking in children. The law now provides minimum mandatory penalties when trafficking victims under 18 years of age.

In an interview with the CardusDaily website last year, Smith, an Evangelical Protestant, said that she sees her fight against human trafficking as inseparable from her religious faith. She set up the Joy Smith Foundation in 2010 to educate Canadians about the needtosupportvictims of human trafficking. She says that Canada is a haven for predators, a view that Denise Mattock, president of the National Council of Women of Canada, concurs with. "Canada," she has said, "is a destination country for trafficking because of our affluence."

The Canadian government invested more than $6 million in 2013 in a national action plan to combat human trafficking. Details of the plan—proposed by Smith—were released by Public Safety Canada in 2012. The plan provides funds to organizations that support victims and strengthens the response of law enforcement officials to human trafficking incidents.

Julia Beazley, a policy analyst for the Evangelical Fellowship of Canada (EFC), which has supported the anti-human-trafficking bills of Mourani and Smith, says that Canadian laws are often contradictory, especially in controversial areas such as prostitution. She wonders what effect any new law on prostitution (or a lack thereof) will have on efforts to combat human trafficking.

At EFC's President's Day, on October 18, 2012, Beazley offered a clear faith-based explanation for what is wrong with prostitution. "Our shared belief is that God…compels us to both announce and to guard the fundamental dignity of each person. We understand that people should be treated as creatures with inherent worth, and not as objects or playthings for someone else's gratification or profit."

She shared the Biblical passage from Isaiah 58:6 in support of the view that human rights are linked to the recognition and protection of human dignity. It says: "I'll tell you what it really means to worship the Lord. Remove the chains of prisoners who are chained unjustly. Free those who are abused!"

While Mourani and others may feel that they would hold the same views if they were not believers, it is clear that there is a foundation in Judeo-Christian principles and teachings for the fight against human trafficking. How this fight is best referenced is complex, because in real life prostitution involves all manner of contradictions. Mourani says that she is "sure" there are believers who do not support any law prohibiting prostitution, as well as believers who go to prostitutes. Conversely, there are people who don't believe in God who support a law criminalizing prostitution and who would never participate in the sex trade.

A criminologist by profession, Mourani says that the average age of entry into prostitution is 14, but she has seen girls as young as 12 working in the sex trade. She dismisses the view that women choose prostitution as a form of employment and are comfortable with it, saying that this widely accepted view is an urban legend. "Do you really think that young girls of 12 choose to prostitute themselves? These girls are on the market to feed the needs of pedophiles who justify their [actions] because they pay for it," she was quoted as saying in the French press.

She makes no bones about the fact that if newly-minted Montreal Mayor Denis Coderre does not have the unilateral power to make these changes, then he must go and get the powers that he needs from the PQ government in Quebec City to get the job done. (A committee headed by Montreal city councillor Annie Samson has been set up to study the issue.)

Mourani says that society must provide victims with the resources to get out of prostitution, noting that 80 to 85 per cent of female prostitutes say they would get out if they were given the tools to do so. Mourani told her colleagues in the House of Commons that she has been working with victims of prostitution for a long time and would not change her views. "Prostitution isn't the oldest profession in the world," she told them. "[That] is a lie."

The Truth is Freedom

Is the prevalent sale of human bodies a real-time consequence of reducing human freedom to ideology?

In the second of two parts, Convivum contributor Deborah Rankin talks with front line warriors against human sex trafficking. Despite tough laws passed by Canada in recent years, the battle in the street is far from over.

Conscience Versus the Spirit of the Age

In this text of his address to the annual Red Mass dinner hosted by the Thomas More Lawyers' Guild of Toronto in October 2014, federal Minister of Employment and Social Development Jason Kenney calls on assembled lawyers to defend conscience rights as a bulwark against the spirit of the age running roughshod over us