Not All That We Desire
Alan Hustak

DEK:As Canada began coming together in a confederation 150 years ago, considerations of faith were at the forefront of the debate. Convivium contributor Alan Hustak writes that only one bishop in Quebec openly supported the original union. Even those not adamantly opposed, such as Catholic Archbishop Pierre-Flavien Turgeon, tepidly termed it a mere lesser of two evils

Roman Catholics in Lower Canada had little to gain, and a great deal to lose, 150 years ago when politicians were debating the merits of Confederation. Conversely, the faithful in Upper Canada stood to improve their lot with a union.

The foundations for a confederation had been laid in 1858 by John A. Macdonald and George-Étienne Cartier, who advised the colonial secretary in London that the then system of government in the United Province of Canada had proven unstable. There had been 13 administrations in eight years, and the government was prepared to introduce “the federal principle” in order to allow “the Maritime Provinces and the North-West Territory to be incorporated into the same system of government,” according to a confidential memorandum to the premier of Canada West.

The idea gained urgency in 1861, as the United States was ripped apart by civil war. By 1864, the framework for the new Canadian nation had been hammered together in Charlottetown. Only two of the 44 Roman Catholic bishops in British North America at the time championed the idea: the Archbishop of the Atlantic provinces, Thomas Connolly, and the Archbishop of Kingston, Edward John Horan.

Bishop Connolly took on Joseph Howe, the formidable Nova Scotia journalist and politician who evilsstubbornly resisted the idea. Howe argued that under the new order, tariff increases would lead to economic ruin in the Maritimes, and furthermore, it would be impossible to weld French and Irish Catholics and Anglo-Saxon Protestants into a new nationality.

Bishop Connolly was a pivotal figure in the debates, an ardent supporter who committed himself body and soul to the idea of a Canadian nation. He exerted his influence behind the scenes with the people who mattered. In particular, he cultivated the colonial secretary in London, who ultimately would be responsible for navigating the enabling legislation, the British North America Act (BNA Act), through the British Parliament.

Seventy per cent of the Catholic population at the time was, of course, either French-speaking – a majority of them in Lower Canada – or Acadien – in New Brunswick. Catholics in French Canada had little to complain about under British Colonial rule: the Constitutional Act of 1791 had guaranteed them “the enjoyment of civil and religious rights” and allowed them greater religious freedom than had the Catholics in the United Kingdom, who were still subject to penal laws.

The failure of the 1837 Rebellion launched by the Patriotes against the British Crown allowed ultramontane Catholicism to take root in Lower Canada and flourish. The Church in Lower Canada became, in effect, a parallel government – both the spiritual and political authority.

Ultramontane bishops railed against secular ideas that had sparked the 1837 Rebellion and branded those who fought for a more open society as rebels and dangerous rabble-rousers whose ideas were incompatible with Church teaching. As Terrence Murphy and Roberto Perin wrote in A Concise History of Christianity in Canada, French Canadians spontaneously identified with ultramontane thinking “not because they were intellectual reactionaries but because it reinforced their sense of a collective self.” The idea of a confederation with the English-speaking provinces in which Quebec would be one of four voices in a union instead of an equal partner threatened that collective sense.

It was a different story in the Maritimes and in Upper Canada. Like Bishop Connolly in Halifax, the bishop of Kingston, Edward John Horan, was an advocate. Horan had cultivated a friendship with John A. Macdonald, who represented Kingston, and had urged his priests to direct Catholics to vote the right way. The English-speaking Catholics of Upper Canada – the Irish and the Glengarry Scots – were a minority who saw Confederation as an opportunity to put the Catholic Church on equal footing with the Protestant majority so they might establish Catholic schools. Correspondence in the Archdiocesan archives reveals that Macdonald considered Horan a trusted advisor. It was a mutually beneficial relationship, each depending on the other for favours.

Horan secured the Catholic vote in Kingston for Macdonald. In exchange, Macdonald secured patronage appointments for Bishop Horan’s supporters and relatives. The bishop was active in lobbying for Catholic schools and, at Macdonald’s urging, went on a speaking tour of the Maritimes to help Bishop Connolly sell the idea of Confederation. 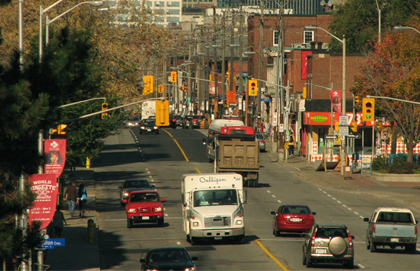 In Quebec, the driving force behind Confederation was George-Étienne Cartier. The Archbishop of Montreal, Ignace Bourget, was shrewd enough not to oppose the inevitable, nor would he openly endorse Confederation. Bourget’s coadjutor, édouard-Charles Fabre, was George-Étienne Cartier’s brother-in-law. Privately, though, it appears Bourget held the view that the State was subordinate to the Church and that no government, whatever form it took, could revise or change fundamental Catholic beliefs because it had no jurisdiction.

When Cartier sent Bourget a draft of the BNA Act for his approval and pointed out the clauses that recognized Quebec as a distinct society, Bourget refused to read it. Cartier may well be a Catholic and a conservative, Bourget said, but not a true Conservative.

“Bourget was not interested in politics except insofar as it affected the rights of the Catholic Church and Catholics in Canada,” says Roberto Perin, a professor of history at York University’s Glendon College. “He was unhappy with Confederation politicians because they didn’t do enough to protect Catholic rights, specifically those of minorities outside Quebec. Bourget was not opposed to Confederation as such but to the way Protestant politicians got guarantees for the Protestant minority in Quebec while refusing to grant the same concessions to Catholic ones outside Quebec.”

The only bishop in Quebec to endorse Confederation openly was Rimouski’s Jean-Pierre-François-Laforce Langevin. That was understandable. His brother Hector-Louis was, after all, another of the Fathers of Confederation. In one of his first pastoral letters, Bishop Langevin praised the union of the four provinces as “the expression… of God himself.” At the same time, Bishop Langevin reminded his parishioners that the terms of Confederation guaranteed Quebec a fixed number of 65 seats in the House of Commons and guaranteed the use of the French language in Parliament, which reinforced the province as “a distinct, French-speaking society, equal partners in a confederated Canada.”

In June 1867, a month before the birth of the new nation, only four of Quebec’s bishops spoke out in favour of the political realignment.

Charles-François Baillargeon, the administrator of the See in Quebec City, acting on behalf of the ailing Archbishop Pierre-Flavien Turgeon, damned the idea with faint praise. Baillargeon expressed reservations because representation by population in the rest of the country meant the Dominion of Canada would be governed by an English-speaking Protestant majority. But he accepted D’Arcy McGee’s argument that a confederal State was preferable to being annexed by the United States.

“If it be not without fault, if this union is not all that we desire, we must realize that nothing in this world is perfect,” Baillargeon wrote. “In a country like ours, where so many diverse interests are at stake, it is impossible to avoid some mutual concessions so as to obtain an arrangement that should give satisfaction to all.”

In St. Hyacinthe, Bishop Charles Larocque recognized the deal as “an occurrence of immense significance” and “an achievement without parallel in the annals of our history.” His pastoral letter also argued that Confederation was the lesser of two evils: better to be Canadian than risk being swallowed up by the United States. “The fate awaiting us if God, at some future date, suffered us to endure a Republican form of government such as exists in the United States, would be comparable to that of so many tributaries which have come to be swallowed up in the great St. Lawrence.”

Bishop Thomas Cooke of Trois-Rivières (who, in spite of his Irish name, was French-Canadian) refused to say anything, but he instructed his second-in-command, Bishop Louis-François Laflèche, to speak on his behalf. Laflèche, whose mother was Metis, had spent 12 years as a missionary in the Red River Colony. If there was an advantage to Confederation, he believed it was that it would allow French-speaking Canadians to be equal partners in the union and populate Upper Canada and the West.

In his treatise, Quelques considerations sur les rapports de la société civile avec la religion et la famille, published in 1866, Laflèche referred to Lower Canada as the cradle of a French-Canadian nation, with its own customs and common law “where more than linguistic and religious privileges are guaranteed. Whomever loses his language loses his faith.”

In Ottawa, the new nation’s capital, Bishop Joseph-Bruno Guigues remained strictly neutral. Bishops, he said, had enough to do without meddling in politics. But at a St-Jean-Baptiste Day rally in Ottawa one week before Confederation was enacted, Bishop Laflèche chided him, “It is an error condemned by reason, by history and by revelation to say that the Church has no business to enter into the political arena.”

Out West, Bishop Alexandre-Antonin Taché worried about what the union might mean to the future of the fledgling Red River Colony. Taché, too, refused to be publicly drawn in to political matters, but privately he warned all concerned that French-speaking Metis and the Aboriginal population in his diocese would become second-class citizens if the territory should be annexed. French-Canadians, he feared, “will be sacrificed, and the new system will lead to our ruin.” In a letter to a colleague, Taché presciently warned of “a genuine revolution in [Manitoba] that the insignificant editors of our insignificant newspapers are now fomenting,” by asking to become a Canadian province. He was right. Three years later, the first Riel uprising began.

In the end, only about half of all the Roman Catholic bishops in the country endorsed Confederation. Those who did then preached that Catholics had an obligation to support the Conservatives in the election that was called.

Only after July 1, 1867, did the Archbishop of Montreal add his episcopal opinion about the new Dominion. He instructed his parishioners to “respect the constitutional authority” and at the same time threatened any of those who voted Liberal with excommunication.

For the first time since the Conquest, new tensions arose between the Roman Catholic Church and the State – tensions that festered for more than a century.

As historian Mason Wade, author of The French Canadians, wrote: “Among a people so religious and so politically minded as the French Canadians, this struggle could not fail to be of extreme bitterness; and among a people who had confused racist and nationalist ideas with religious ones, it was inevitable that the major issues of the day…should become intricately involved in a tangle which defied the talents of statesmen and canonists alike.”

The seeming uncomfortable paradox of the Catholic Church in Quebec is illuminated by two pieces of legislation making their way through the province's National Assembly.