Pope Francis just returned from a trip to the United Arab Emirates, the first ever papal trip to the Arabian peninsula, where Islam was founded in the seventh century.

The centrepiece of the Holy Father’s trip to the UAE was the joint signing of a “Document on Human Fraternity for World Peace and Living Together.” Pope Francis signed it with Sheikh Ahmed al-Tayeb, the Grand Imam of Al-Azhar in Cairo, the leading university in the Sunni world. While Islam does not have a central authority like the pope, Al-Azhar has sufficient history and prestige that it can be considered a leading institutional voice.

That bit about “Living Together” caught our eye at Convivium as you might expect, as it can be translated as “living together.” The joint declaration included a renunciation of religious violence for any reason, and a plea for greater fraternity among different peoples and faiths.

All to the good, to be sure. Given that the Arabian peninsula is one of the worst places on the planet to be a Christian, the UAE got lavish praise this week for being a place where Christians are neither imprisoned nor killed. They don’t have full religious freedom and, as mostly foreign workers, are subject to all manner of injustices, but it’s about the best on offer in a region marked by both excess and wretchedness. I made those points here.

Yet what struck me about the papal trip to the UAE was how all those involved, from the papal party to the journalists to the participants in the interfaith conference, ignored the enormous camel in the room, namely that the UAE is a socially appalling place.

President George W. Bush used the phrase “the soft bigotry of low expectations” to describe attitudes that expected very little of racial minorities. “Those” people were not capable of much, so not much should be expected of them. Often public policies, ostensibly aimed at ameliorating some problem, are infected by that soft bigotry. “Those” people are not capable of doing for themselves, so it ought to be done for them.

There was something of that in the trip to the UAE. This Islamic country limits religious freedom, but churches are permitted and worship is allowed, and Christians are not in mortal danger. That’s worth at least one cheer, if not three.

But leave aside the question of Islamist violence against Christians. The entire UAE project – petroleum-fuelled excess built upon the exploitation of foreign workers who have few civil rights – is morally dubious, at least according to how Pope Francis generally speaks.

Yet what struck me about the papal trip to the UAE was how all those involved, from the papal party to the journalists to the participants in the interfaith conference, ignored the enormous camel in the room, namely that the UAE is a socially appalling place. 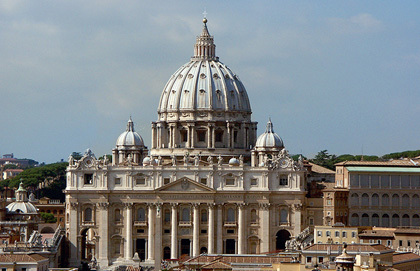 Sea to Sea: Rupture and Resistance
Riding the Revolution
From Sea to Sea: A Continuing Survey of Religion, Culture and Public Life

Climate change, which the Vatican under Pope Francis has elevated to civilizational emergency? The UAE is a petro-state.

Environmental protection, about which the Holy Father wrote an entire encyclical? From water desalination to air conditioning to building golf courses and indoor ski hills and skating rinks in the desert, the UAE paves paradise to put up a valet parking lot for luxury sedans.

Migrants, which the Holy Father speaks about with great frequency and urgency? The UAE gives no status to foreign workers, de facto does not accept non-Muslim immigrants and refused to take even a single refugee from nearby Syria.

The raison d’être of the UAE is to pursue obscene levels of luxury as an end in itself, all achieved by that nastiest of all resources, carbon fuels.

About all this, no one, including the Holy Father, had much to say. Guests are expected to show good manners. But still, one suspected that if Pope Francis had been in a Christian country – say the United States – he would have offered some pointed criticisms. In fact, he did so in 2015.

But what can be expected from a Muslim country? Not much apparently, to judge from the UAE trip.

Consider the following: In the UAE a recent luxury trend is edible gold. Yes, flakes of 24-carat gold are added to desserts or cocktails. Gold doesn’t change the taste of anything; it is actually an annoyance, because it sticks to one’s teeth and mouth. All the better though for conspicuous consumption – and for posting to Instagram. Look at how rich I am! Those gold cocktails are prepared by bartenders from India or the Philippines who may well live in something approaching indentured servitude.

Back in 2014, Pope Francis tweeted that “inequality is the root of social evil.” No such tweets this week in Abu Dhabi.

The story of the edible gold in the UAE brought to mind something else I had recently read. Yes, it was a story last month by our great feature writer at the National Post, Joseph Brean, about lapis lazuli crystals found in the teeth of the skeleton of a German nun from a thousand years ago.

“The accidental discovery of microscopic crystals of a rare and precious Middle Eastern gemstone embedded in the tooth of an 11th-century German nun has cast a new light on the role of women in painting medieval religious texts, a field traditionally thought to have been dominated by male monks,” Brean wrote. “The most likely explanation, according to a new scientific paper, is that this woman was a painter using an exquisite blue pigment, which got into her mouth as she used her lips to twist her brush into a fine point.”

Riches put to the service of illuminating the holy Word of God. That’s the Christian tradition. It has echoes, too, in the history of Islamic sacred art, which emphasizes calligraphy rather than images. But not in today’s UAE, where riches are put to the aggrandizing of the self, wealth for its own sake. It’s not something to be proud of, or to admire.

Still, it is certainly good that Christians are not being killed there.

Sea to Sea: Rupture and Resistance

The Synod on the family and marriage raises serious questions on loyalty's meaning.

You say you wanna revolution? Don’t blink. It just roared past.