Convivium: Reflecting on murder and wounding of Muslims at prayer in Quebec, do you see it having broader significance for religious freedom and to the promotion of religion as an essential and integral part of society?

Andrew Bennett: The first thing that came to mind is that this was such a horrific violation of one of the core elements of religious freedom: the freedom to worship in peace and security, and to worship according to whatever faith tradition you practice.

When I was working on religious freedom as ambassador, and looking at violations of religious freedom overseas, this is the sort of thing you expected to see in Pakistan or in Nigeria or in a country where there’s really serious violations of religious freedom. It’s what you expect in countries where different minority communities are being targeted. To see it in Canada? It came, obviously, as a grave shock because of the horrific nature of it – the killing of these people. But it also pointed to something within our society that we do not talk about, and that is religion.

If we’re going to actually have a common life, if we’re going to live together as Canadians, we have to get past this fear of talking about religion in public; the fear that some people have of what those people are doing behind that door over there in that building on Friday, Saturday, or Sunday, or any other day of the week.

These people, whether they are Muslims, Christians, Jews, or Hindus, are first and foremost human beings who are doing something inherent to who we are as human beings: worship of God. Of course, there are people in our society who do not have a particular theistic belief. They’re not involved with any particular faith community, and they choose not to practice a particular religion. That has to be accepted as well.

Convivium: There is always the question, though, of whether an event such as the killings in Ste. Foy is indicative of a broader social problem, or is it just some poor lunatic’s idea of what he’s being told to do by the voices in his head. Janet Epp Buckingham framed it in Convivium as Quebec having a religion problem. Is it? Are you convinced this kind of act represents something broader in Canadian society?

Andrew Bennett: It’s difficult to weigh in on either side. Obviously, the person responsible has something wrong with him to perpetrate such an act. To murder innocent people is such a horrific violation of human life and human dignity. At the same time, in our society, when we are unable to accept that there is a community in this country – Muslims – who practice their faith in this way, that’s also a rejection of human dignity. One thing I found striking after the attack on the mosque, following the very righteous condemnation of the act, and the deep sympathy and prayers offered for those who were killed, was that we saw very little by way of a response from elites in our country about this being a violation of religious freedom.

To see it in Canada? It came, obviously, as a grave shock because of the horrific nature of it – the killing of these people. But it also pointed to something within our society that we do not talk about, and that is religion.

Yes, it was murder. Yes, it was a horrific act of terrorism of a type. But we didn’t hear the condemnation based on these people being at prayer. At prayer, those of us who are faithful, those of us who are religious, are fully ourselves. So here were these people of Muslim faith being fully themselves, and being gunned down in a place where they should have been safe. It’s important for us as Canadians, and for our leaders, whether in Parliament or opinion leaders, to recognize that this type of atrocity is unique in being a violation of something so inherent to us as human beings.

C: The catchphrase being used in public language is ‘Islamophobia’ as if it’s purely an irrational act. In the killer’s case, it might well have been, but at the broader level you’re talking about, it’s not a phobia at all. It’s calculated. It’s a conscious act. It’s not like being afraid of spiders, a fear you can’t reason yourself out of. There’s an evolved attitude toward religion and towards faith that is not ‘phobic’ in terms of coming from some deep, dark, irrational place. It’s a calculated, reasoned-out rejection of people who pray, people who have faith. 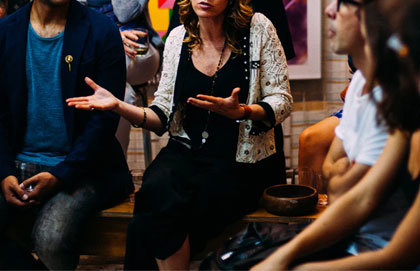 AB: I would agree with that. It comes down to an inability of people within Canadian society, including our leaders, including opinion leaders, to distinguish between those who perpetrate violent acts in the name of religion – for example, Islamic jihadists use Islam by wrapping themselves in its mantle to justify barbaric acts – and the vast majority of Muslims who are not doing that. They simply want to practice their faith peacefully.

By extension, we look at commentators like Neil Macdonald of the CBC who, in response to this, started to cast aspersions on Christians by saying the young accused is a white Christian man. First of all, we don’t know whether he’s a Christian or not. Secondly, what does that have to do with the matter at hand?

He (Macdonald) is raising the question of whether we shouldn’t be screening for white Christians coming into Canada, into North America, because Christians also do wicked things. Well, yes, there are Christians that do wicked things. But that’s not Christianity. And what Islamic radicals are doing, that’s not really the essence of Islam. Is there a very strong strand of it within Islam? Unfortunately, yes there is. But I meet regularly with Muslims who get so frustrated in having to address this day in and day out. In their minds, the jihadists do not represent true Islam.

So, we have to be able to distinguish between bad religion and faithful people, or the bad use of religion. Religion itself is not bad. Faith is not bad. Religion is how we as human beings conduct ourselves, organize ourselves, worship so that we might give voice to that deepest longing within ourselves, the desire to worship God. We’re also fallen, so people can take that and warp it and distort it and do horrible things in its name. But we need to be more rational and look at what’s going on here. There’s a distinction that needs to be made and we need to continually reinforce the idea that people of deep religious faith have a place within our society, they have a role to play within our society and they need to be able to practice their faith openly, express their faith publicly, otherwise we’re not going to be able to move forward.

C: You were equally vocal last fall when there was violent defacing of a synagogue here in Ottawa. Do you see the two things as differences of degree rather than kind? Obviously, the murder of six people is more horrendous than painting anti-Semitic slogans on a door. But I wonder if you see percolating underneath both a very dangerous effect that must be denounced at the small level to stop it becoming the tragedy we witnessed in Ste. Foy.

At the heart of anti-Semitic, anti-Islamic, and anti-Christian actions is an unwillingness to accept the Other. In the case of anti-Semitism, this country, along with many other countries, has for too long embraced a polite anti-Semitism, whether it’s jokes about Jews, off-hand comments about Jews, questioning the motivations of Jews. We see it manifested in the BDS (Boycott, Divestment, Sanctions) movement. I hope we’re not seeing in this horrific act a violent manifestation of a similar kind of popular, polite anti-Muslim sentiment. We’ve got to nip that in the bud. We have to be very conscious within Canadian life of our predilection for casting aspersions on people who are not like us. We really have to check that. We really have to recognize in each other that God-given dignity that we all bear.

C: But isn’t there another dilemma that arises? We saw (Green Party leader) Elizabeth May make a very eloquent declaration that “we are all Muslims” in the aftermath of the Ste. Foy shootings. Except that we aren’t all Muslims. Nor are we all Jews nor are we all Catholics.

It’s a challenge we face in the Faith in Canada 150 initiative as well. The tolerant and pluralistic space we want to create is a wonderful thing, but when a horrible crime like this happens, we want to rush into that space and say ‘we take on that identity for the sake of solidarity.’ But how do we draw the proper lines so we’re not confounding truth or reality by saying we’re something we’re not?

You see a sign outside a church that says ‘we’re all Muslims today’ but, no, we’re not. It’s a Christian church. I’m a Christian, and as a Christian I recognize the inherent dignity of every human being. Therefore, I’m sorrowful and I mourn the horrific act that took place and I will pray for that community, I’ll pray for the souls of those who were killed. But I’m not a Muslim. I don’t want to be a Muslim.

My Christian faith calls me to recognize fellow human beings of the Muslim faith, and in that to show genuine compassion at a time of great sorrow and loss. But to say I’m a Muslim is to deny my Christian faith, That needs to be very clear.

It’s not to deny my capacity to have empathy. It’s not to deny my capacity to show love to people. But my compassion, empathy, and love come from my faith in Christ. For a Christian leader to use that kind of language can be very confusing because it can cause other Christians to ask whether they need to use that language too. Well, no, you don’t. Just be a faithful Christian. And if you’re faithful Christian, you’re being of service to those Muslims because you’re praying for them.

Our suffering has meaning because Christ suffered on the Cross. So, when we see suffering in the world, we must speak out against it, take action as best we can where we are to help alleviate it. But we also know Christ took all the sufferings of the world into the wood of the Cross and in that we can make sense of these types of acts. They still shock us. We still feel sorrowful about them. But as Christians we can see this is not the end, there can still be hope.

In all the work we do at Cardus, in all we do in our lives, in all we do broadly in society, hope has to be at the centre of everything we do. For those people who are prone to despair after a horrible crime like this, we can say there is a hope, we can pick ourselves up and build anew a common life in which we understand each other more fully, and doing so on the basis of our deeply held religious beliefs, not compromising them but drawing on them to show genuine compassion and the genuine dignity of others.