It was almost the night before Christmas, and all through the Gaza Strip, less than 100 kilometres from Bethlehem where Jesus was born, a dwindling population of Palestinian Christians were facing the prospect of spending yet another Christmas away from family members who live in the West Bank.

But a miracle happened, just days before Christmas, and at least 50 of them were able to obtain much-coveted travel permits to travel from their homes in the Gaza Strip to join families in the West Bank.

After flip-flopping wildly over the past several weeks, and even giving contradictory information to applicants, Israeli authorities bowed to pressure from advocacy groups such as the Philos Project, a New York-based NGO that promotes positive Christian engagement in the Middle East, and Gisha, an Israeli group that advocates for freedom of movement for Palestinians.

The story of travel restrictions between the Gaza Strip and the West Bank goes back to the early 1990s, during the of Israeli-Palestinian conflict of the time.

Since then, daunting economic obstacles, and seemingly impenetrable layers of bureaucracy prevent free movement between the two territories, forming a barrier as insurmountable as the Berlin Wall in the heyday of the communist empire.

The Israeli government, citing reasons of national security, has imposed severe travel restrictions on residents of the Gaza Strip, a narrow strip of land on the Mediterranean coast, controlled by Hamas and separated by 115 km from the West Bank,  also considered to be part of the Palestinian Territories, but with 60 per cent of it under Israel’s civil and military jurisdiction.

Several countries including Israel, Canada and the US consider Hamas a terrorist organization, and Israel is fearful of aggressive actions being launched from their base in the Gaza strip.

Caught in the cross-fire between the needs of national security and their right to freedom of movement, is the Christian minority of the Gaza strip, a small population mostly of the Greek Orthodox Church of Jerusalem.   Subjected to religious discrimination in addition to the unemployment and economic woes shared by the whole population, they live in what has been described as an “open-air prison.”

Their numbers have dwindled sharply from 3000 in 2009, to approximately 1000 today, with many young people leaving for greener pastures in the West Bank or foreign countries outside the Middle East.

Khalil Sayegh, 25, is one of those Christians who fled years ago, at the age of 15, to the other side of the divide— the West Bank— over the objections of his parents. Now 25, he lives in the city of Ramallah where he is employed as a Fellow of the Philos Project. 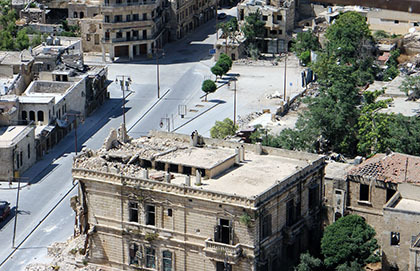 A week ago, he was anxiously waiting for his parents and siblings from Gaza to run the gauntlet of checkpoints and join him.

“Christians are not a security threat and they should be treated differently,” Sayegh said in an interview last week, adding that Gaza’s Christians feel isolated and alone.

“In the past, the Israeli authorities used to grant a number of permits each year to Christians who wanted to travel to the West Bank for Christmas and other holidays,” he said, adding that this year he had not yet received any final word on their decision.

To most Canadians, used to freedom of movement within their own country, the situation of these families is unimaginable. But some, who have travelled to the area and have had an opportunity to observe the simmering political tensions of the Middle East at first hand, have a different view.

“A year and a half ago, I spent Easter in Bethlehem with Palestinian Christians. (Going to Gaza would not have been safe),” Garnett Genuis, MP for Sherwood Park-Fort Saskatchewan wrote in a Facebook post. It was a wonderful and moving experience.”

Genuis underscored the dilemma of Palestinian Christians in Gaza who are severely oppressed by Hamas and unable to leave because of Israeli security concerns.

“As you prepare to celebrate Christmas this year, please keep the Middle East's hard-pressed Christian communities in your thoughts and prayers,” Genuis appealed to his readers.

Amanda Achtman of Ottawa is the Director of the Canadian chapter of Philos Project.

To raise awareness of the plight of Palestinian Christians, and also funds for a Philos Project initiative called “Gaza Exodus,” she and fellow volunteers recently organized a cocktail reception at “Fairouz” a Middle Eastern restaurant in Ottawa. Another fundraising event was organized in Toronto at a Syrian restaurant called “Zezafoun,” owned by a Syrian Christian mother-daughter duo who came to Canada as refugees three years ago.

The goal of the Gaza Exodus initiative is to raise $20,000 to help four Gazan Christian families with their expenses as they travel to reunite with relatives.

Miriam Marmur is the International Media Coordinator of Gisha (Access in English) that advocates for freedom of movement. She criticized Israeli authorities for issuing multiple, contradictory statements that kept Gazan Christians in any agony of suspense.

But the advocacy efforts of both these groups-Philos Project and Gisha paid off.

“We at Philos Project spent five days in Israel advocating for this change of policy at the highest levels. Thrilled to see it come through,” Rob Nicholson, President of Philos Project tweeted on Sunday night.

“Any addition of permits is a welcome step, one that Israel should have made possible, to begin with rather than putting Gaza residents through uncertainty and senseless delay,” Marmur said.

But 850 applicants still wait for their permits.

As the clock strikes midnight on Christmas morning, and church bells peal joyfully in Gaza and the West Bank to announce the birth of Jesus, it is more than likely that—unless a second miracle happens—these 850 Christians who are undergoing security checks will celebrate Christmas as “two solitudes”—separated, not by religious and cultural barriers as in Hugh McLennan’s beloved novel about English and French Canada—but by checkpoints and bureaucratic roadblocks that keep them apart from their loved ones.

Susan Korah says the time for Canada to act is close to half-past too late for Syria’s suffering.

The Fires This Time

With the annual Parliamentary Forum on Religious Freedom being held in Ottawa this evening, Convivium contributor Susan Korah reports on film-maker Jordan Allott’s documentation of Iraqi Christians “caught between two fires” and threatened with extinction while Canada looks the other way.