Pope Francis promotes the sacrament of confession with great vigour. Specifically, during Lent he has requested that every diocese designate a church to remain open for “24 Hours for the Lord” where priests are available all that day and night for those desiring to receive the sacrament of reconciliation. Tomorrow, I will be in the confessional booth for a few hours at St. Mary’s Cathedral, our designated church in the Archdiocese of Kingston.

The priest hearing confessions never knows what exactly the next penitent will say. It could be a 12-year-old girl quarreling with her brother, or a man coming to confession in search of mercy after 30 years and a lifetime of moral messiness. That won’t be a problem this week at the University of Regina, where the sins are known ahead of time.

It’s Man Up Against Violence Week at the University of Regina, one of those eminently respectable initiatives sponsored by labour unions, aboriginal leaders, major corporations and various government bureaus. Athletes in Action, the Christian group, is also a sponsor. Speaking as a man against violence, prima facie it seems a worthy initiative.

It’s a pretty run-of-the-mill social change advocacy week on campus, with all the standard activities. But one caught the eye of the Internet. Organizers are offering a novelty:

The traveling Confessions of Masculinity Booth will be there! We have all reinforced hypermasculinity one way or another regardless of our gender!! ...Come and share your sins so we can begin to discuss how to identify and change our ways!!!

I’ll pass over observing that for a pitch-perfect-progressive initiative it seems very Catholocentric to offer a confessional booth. Perhaps there is also a travelling Yom Kippur service for the atonement of hypermasculinity, or a sweat lodge for the toxins of same to be expunged. I suspect they opted for the confessional because there is no other cultural icon of confession and conversion as recognizable, which is why Hollywood films seem to end up there rather frequently.

The actual sacrament of confession involves total secrecy. A priest – even should he be threatened with martyrdom – can never reveal the contents of a confession. The penalty is automatic excommunication. Man Up For Violence offers confessions that apparently trumpet the sins being confessed. 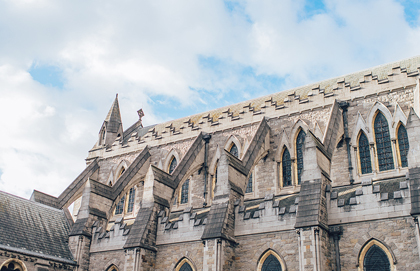 Post-Christian Mobs of Yobs
Faith Across Faiths
100 Years of Fortitude
I’ll pass over observing that for a pitch-perfect-progressive initiative it seems very Catholocentric to offer a confessional booth.

It’s not clear who is hearing the confessions, but the emphasis here is not the God who forgives but rather the penitent, who emerges with a aura of self-congratulation for his own enlightenment. Perhaps the assigned penance is to recite the biblical verse, “Lord, thank you for not making me like other men.”

Is hypermasculinity a sin? It depends what is meant of course, but a good thing taken to an extreme can be corrupted. That is more or less the Aristotelian approach to virtue and vice. Virtue stands in the middle, the philosopher taught, between an excess and a deficiency. The virtue of courage stands between recklessness and cowardice. So virtuous masculinity would be between hypermasculinity and hypomasculinity. Perhaps one might say that it is between machismo and effeminacy, though the latter term is not the sort of language that Man Up Against Violence would use. Their vision recognizes that masculinity is not to be eliminated, but lived properly:

Man Up Against Violence will raise awareness around healthy masculinity and provide opportunities for education with a goal of increasing involvement of men in the cause. With the support of male advocates, Man Up Against Violence will continue to challenge the damaging effects of socialized hypermasculinity, ergo reducing violence in our communities.

The lack of healthy masculinity is lamented from both a progressive perspective, as at the University of Regina this week, and from a conservative perspective, as one sees in movements such as Promise Keepers. In Catholic campus ministry, one of the most popular saints is Pier Giorgio Frassati, an Italian who died in 1925 at the age of 24.

His spirituality was Eucharistic and sacramental, emphasized concrete service to the poor, and was marked by a convivial delight in the wholesome fun typical of young men and women. He was a gifted mountaineer and something of a rebel : his parents were wealthy and influential extreme secularists who desired for him a life of worldly success. I doubt that Blessed Pier Giorgio will figure much in the Man Up Against Violence Week, but it is true that men like Frassati are not violent.

A problem without a name is a problem you cannot do much about. In the progressive world that eschews the language of virtue and vice, morality and sin, something like “socialized hypermasculinity” must serve, I suppose. Yet two of the most toxic corruptions of masculinity today – pornography and video games, especially violent ones – do not strike one as very “hyper” activities, but alternatives to actual activity. Deficient masculinity today often means too much time is spent on the couch, not enough doing something real.

I hope that the involvement of Athletes in Action at Man Up Against Violence might bring to bear perhaps the single text most radically opposed to violence fuelled by “socialized hypermasculinity”: Love your enemies, turn the other cheek, no greater love hath a man than to lay down his life, blessed are the meek, blessed are the persecuted, forgive seventy time seven, thy will be done, go sell all you have and follow me.

You may have come across it.

I doubt very much that tomorrow afternoon in my non-travelling, very anonymous confessional booth any penitent will confess “hypermasculinity.” Indeed, people who speak about “socialized hypermasculinity” are likely not the kind who go to actual confession. But they are welcome, also to confess sins that might not earn the prestige of being condemned by a fashionable advocacy week on campus, for all have sinned and fallen short of the glory of God.

On the heels of a full week, Editor in Chief Father Raymond J. de Souza reflects on the violence in both London, England and London, Ontario, St. Patrick's Day, and the release of Rod Dreher’s The Benedict Option.

Most appealing to me (is) the concept of mercy and love, not only for those inside the religions but for those outside.