I'm interested, though, in how these three are oddly connected because they tell us a little bit about who we are by kindling, albeit subtly, some of our most basic desires.

Now I should clarify. I realize that many don't "desire" the coming of March Madness and many might simply be indifferent to College Basketball or the NCAA entirely.

That's fine; in fact, I'm somewhat of a sports-bandwagon-hopper myself and this post might even be more applicable for the bandwagon fans than any others. And here's why: Most people who jump onto the Madness bus without too much prior knowledge tend to cheer for the underdog.

It's almost our default mode. We love upsets. It's a rather odd "rule" for sports viewing, but it does seem that the less we have invested in terms of our sporting loyalties the more hopeful we are that that little team from Backwater, Nebraska will take down the top-tier team with the million dollar budget, intensive recruiting program, and a legacy of national championships. 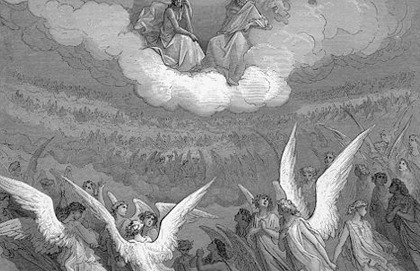 Becoming Like Gods
Be Not Afraid: Prophecy in War-Time
The New Scientism: Still Fighting the Phantom War

What most fans—die-hards and bandwagoners alike—really want when they watch sports, I'll hazard, is a good story. And here, where our definitions of good tend to overlap, do we move beyond sports. The story of the underdog possesses a goodness that tends to resonate across cultural and temporal divides in ways that recurring literary patterns, or archetypes, do.

While the link between sports and literature might seem tangential, it's really not. Sports and literature function in very similar ways, which is likely why both are so enjoyable. Sports creates a rather arbitrary world constructed and constrained by unique sets of laws, but as arbitrary as the laws may be, we'll have to take them at face value if we're going to truly enter into these worlds as players or viewers.

What's true of a game of tennis, then, is true of Game of Thrones; and once we enter these worlds, we find that they are populated by multi-layered characters and tension-riddled plots.

What's true of a game of tennis, then, is true of Game of Thrones; and once we enter these worlds, we find that they are populated by multi-layered characters and tension-riddled plots. Of course, good and evil don't map easily onto our sports worlds (unless Duke is playing), but our shared desire to see the underdog succeed, again, seems to almost universally resonate within spectators.

And such resonance, oddly, doesn't quite fit into a Darwinian (or Nietszchean) world where the fittest should continue to survive and the weak should continue to be trampled upon. Rather, this storyline seems to resonate from a deep, likely unarticulated impulse for that good injustice which just might see that undeserving team rewarded. And when it happens, we are surprised with joy, for such exaltation is, if not always undeserved, almost always unexpected.

In his theorizing about fantasy, J.R.R. Tolkien ruminated often about what compelled readers to wander—not get lost, mind you—into the realms of Middle Earth, a world largely governed by laws of Tolkien's (sub)creating. The success of Middle Earth, at least from Tolkien's vantage, was not simply due to those laws which made his fairy-world coherent, but because they corresponded to a set of laws beyond that fictional realm of ents and elves, Smaug and silmarils.

One such law was that of the eucatastrophe, a word Tolkien coined which means "good catastrophe," or (more helpfully) that unexpected turn in the plot when all seems lost and the hope-unlooked-for arrives. If you've read Lord of the Rings, you'll see how replete the narrative is with such moments. Gandalf's arrival at Helm's Deep, Aragorn's return to the Pelennor Fields, and of course, the always timely arrival of the Eagles, are all moments which, as Tolkien put it, "are a far off gleam, or echo, of evangelium in the real world." That is, they signal the coming of the good news, the word, when all seemed lost and forgotten.

Even the joy of Easter Monday is made that much more poignant by the darkness of Good Friday.

Really, our joy of the victorious underdog is merely a dim, dim shadow of the great eucatastrophic moment that is Easter. If March is the month of expectation, April is the month of fulfillment. Spring is here (almost in Hamilton, at least), Easter is coming, and the March Madness finals will be over in a few weeks. Yet the joy of fulfillment seems contingent upon that month of expectation, a month of uncertainties—how long will winter last?

Even the joy of Easter Monday is made that much more poignant by the darkness of Good Friday. The pattern is not linear, it's cyclical. March will give way to April, but March, with all its uncertain expectation, will come again. Desire to fulfillment, death to life, winter to spring, there and back again, in seemingly endless patterns. Yet the pattern, or the rhythm, is likely what's important. Both for the goodness that it is, but also, perhaps, for a greater goodness it works within and might point toward.