Much like any addiction, it starts slowly and builds gradually. It gains momentum and eventually consumes you until you're trapped, completely beholden to the power of the screen, with no strength or desire to resist the "next episode playing in 10 seconds" button that tantalizes you from the corner of your monitor.

At the beginning, you're just trying to sneak in an episode before dinner, and before you know it you're on a bender—clocking over ten hours in a span of only two days, full seasons watched from start to finish. I've been there, and it is a dark time. I shamefully admit that my Netflix and I are so well acquainted, it has filtered in an entire category of "things I might like" titled "Eighteenth Century Period Dramas with a Strong Female Lead." 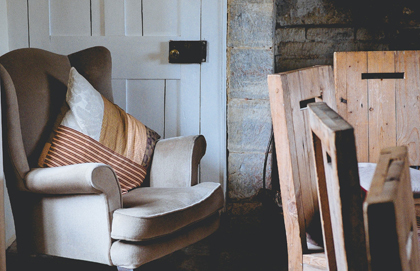 There was one particularly snowy weekend—the kind where leaving the house is not advised unless necessary—during which I binge-watched the Netflix original series House of Cards in its entirety. When I was finished, feeling sufficiently hollow and unfulfilled, an unwelcome thought kept creeping into my mind: this is gluttony in its purest form.

The price of gluttony is not just feeling unsatisfied, and the host of other feelings that come hand in hand with "doing the very thing you hate." It can actually cost us in dollars and cents. Consider the case of Matt Buie, a B.C. man who was saddled with a $22,000 phone bill. While on vacation with his family in Mexico, Buie's 11-year-old-son was confined to their hotel room for three days due to bad sunburn. During this time, Buie received a message from his provider letting him know that for security reasons, namely "excessively high" data charges, his phone would be shut down. "Excessively high" was no understatement—Buie's son managed to use up approximately 700 megabytes of data, which is equivalent to roughly 12 straight hours of video streaming and online games. This leads me to ask: how do we come to this stage of excess, and who is to blame? The child? The parent? The cell phone company? Or is gluttony just a part of our social fabric in this age of instant gratification?

Three weeks into the Lenten season (a time for reflection and repentance, during which we are called to "turn away from sin and be faithful to the Gospel"), I am made ever more aware that we are consistently bombarded with messages that promote ease and convenience; being made to wait for anything from coffee to downloads is reason enough for complaint. Temptation is used as a marketing tool, and it is ever so easy (and seemingly acceptable) to fall prey to fleeting hungers. Humans need limits. We need them because they bring balance and add meaning to our lives. Limits fill the voids that we create with our excess. The first round of all you can eat sushi is far tastier than the second . . . or fifth; movie sequels are almost always crushingly disappointing compared to the originals; and anyone who has ever had a hangover can attest that the first glasses of wine ought to have been the last.  As the saying goes, there is such a thing as "too much of a good thing." I will have to keep this in mind the next time I am tempted to watch just one more episode.

At screenings of two seemingly very different movies, writer Dayna Slusar finds commonality in their evocation of home, and ponders the word’s enduring power for a culture increasingly lost in its hopeless little screens.

The Gravity of Gratitude

A review of the film Gravity prompts one Convivium contributor to cultivate a practice of gratitude this Thanksgiving.